Who is Harry Nilsson (And Why is Everybody Talkin' About Him)?

MVD Entertainment Group // Unrated // June 4, 2021
List Price: $24.95 [Buy now and save at Amazon]
Review by Stuart Galbraith IV | posted June 21, 2021 | E-mail the Author
Among the recent spate of mostly good-to-excellent music documentaries, perhaps the best is one of the first, Who Is Harry Nilsson (And Why Is Everybody Talkin' About Him)? (2006).

Nilsson, who died in 1994 at just 52 (he looked much older than that in later years), enjoyed fleeting commercial success in the early 1970s, peaking creatively with his best album, Nilsson Schmilsson, before embarking upon a long, sad decline of alcohol and cocaine-fueled partying that ruined his health, including his indescribably beautiful singing voice, while his uniquely creative juices were self-sabotaged by self-doubt, fear, and a contrariness that both helped and hurt his career. Director John Scheinfeld's long-in-gestation documentary unblinkingly explores Nilsson's unique place in popular music, its many ups and downs.

Released to Blu-ray by MVD Visual, Who Is Harry Nilsson? was shot in standard definition and unscaled here. Visually it's markedly superior to the earlier DVD release, and while it never quite approaches the clarity of high-def, it's a worthy upgrade. 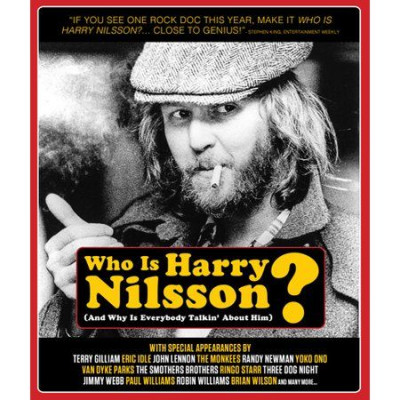 Although the movie opens with actor Dustin Hoffman announcing Nilsson's death at a public event*, the movie traces Nilsson's life more or less chronologically. Born in Brooklyn, Nilsson was profoundly shaped by childhood poverty (reduced to eating dogfood at times) and having been raised by a single mother after Harry's father abandoned them. At an early age Harry drifted to Los Angeles where, despite lacking a formal education, got a job at a bank managing its check-processing computer programs. He eventually starting writing songs for the Monkees and others, his unique talent with melodies and lyrics quickly recognized by fellow artists and record producers.

Signed by RCA Victor, Nilsson's first album, Pandemonium Shadow Show was not particularly successful, but two unexpected events gave him a big career boost. The first was at a 1968 press conference by The Beatles during which they were asked to name their favorite American band. John Lennon's response was "Nilsson," generating interest in the still virtually unknown artist. The other was the Best Picture Oscar-winning film Midnight Cowboy (1969), which initially solicited song submissions from Nilsson, Bob Dylan, and Joni Mitchell, but John Schlesinger went with Nilsson's earlier cover of "Everybody's Talkin,'" which the director had been using as a temp track but liked so much he decided to keep it in the film. Ironically, it was one of the few Nilsson's hits he didn't write himself.

Over the course of his next few albums, Nilsson's uniqueness revealed itself. He parlayed his beautiful 3 1/2 -octave range tenor voice with pioneering overdubbing, creating beautiful harmonies; one amusing anecdote in the film recalls a reviewer chastising Nilsson for not crediting the remarkable back-up singers, not realizing that all of them were Nilsson. Possibly due to some combination of self-esteem and fears about flying, Nilsson refused to perform in concert or go on tour, unthinkable in the early ‘70s pop biz. And, further working against the grain, Nilsson Sings Newman, a 1970 album consisting entirely of songs by Randy Newman, and a later American songbook collection, A Little Touch of Schmilsson in the Night, while conceptually ahead of their time, made little impact commercially.

More tragedy and declining health followed, but offsetting this some was Nilsson's happy third marriage, to Dublin-born Una O'Keeffe, with whom he had six children. (An earlier marriage, to second wife Diane Clatworthy, produced one son, whom Harry abandoned much as his father had abandoned him.)

Who Is Harry Nilsson? eschews contributions of music historians and critics, preferring integrating archival audio of interviews with Harry, rare behind-the-scenes footage and photographs, with new and well-chosen interviews with Nilsson's second and third wives and their children, plus a selection of friends and collaborators, including Mickey Dolenz, Mark Hudson, Ray Cooper, Al Kooper, Randy Newman, Yoko Ono, May Pang, Paul Williams, the late Perry Botkin, Jr., and others. One obvious omission, Ringo Starr, could not be coaxed to discuss his close friendship with Harry (Ringo was Harry's Best Man at the former's wedding with Una); apparently the emotions there run too deep, still.

The interviewees share amusing and sad stories about Nilsson and, more significantly, pinpoint his profound importance to American popular music and innovation in the ‘60s and ‘70s.

Originally produced in standard-definition, for the Blu-ray the video master was remastered and unscaled to high-def, "using an up-conversion process from the original 172,800 pixels per frame to 2,073,500 pixels per frame of full HD." It also appears some of the title graphics may have been redone for the high-def version. In any case, the 1.33:1 looks most like an outstanding standard-def presentation rather than a disappointing HD-source one. It's still a major upgrade from the earlier DVD release, but one shouldn't expect the impossible here. Yet, even on my big screen-projection system the presentation was still pretty exceptional. The LPCM 2.0 surround audio is also quite good, the surround speakers used to good effect in the excerpts from Nilsson's studio albums particularly. Optional English subtitles are provided on this Region "A" encoded disc.

Supplements include deleted scenes and extended interviews, a "Loneliness" music video introduced by Yoko Ono, and a trailer.

Even at nearly two hours, Who Is Harry Nilsson? is captivating from beginning to end, one of the best documentaries of its kind, and a must-see even for those unfamiliar with this unjustly less-remembered artist. A DVD Talk Collectors Series title.

*The film's title, underscored by Hoffman's presence, seems to have been inspired by the forgotten 1971 film Who Is Harry Kellerman and Why Is He Saying Those Terrible Things About Me?, starring Hoffman as a Nilsson-esque pop star. An arcane reference, to say the least.