Kino // Unrated // June 24, 2021
List Price: $24.95 [Buy now and save at Amazon]
Review by Stuart Galbraith IV | posted June 21, 2021 | E-mail the Author
Night After Night (1932) marks the screen debut of Mae West, but the movie is quite unlike all her later starring films. For one thing, fourth-billed West has a supporting role here, and for really the only time in her movie career plays more of an actual character within a larger story than the completely dominating Mae West persona of later films, around which everything revolves. The picture itself is lighthearted gangster film, headlined by George Raft in his first starring film, following his tremendous success supporting Paul Muni in Howard Hawks's Scarface, released earlier that same year. Night After Night is completely different, however, closer in spirit to the later Edward G. Robinson Brother Orchid than Hawks's classic. Raft is good, in an unusual, non-actorly sort of way, but West, her appearance in the film limited to two big scenes, is genuinely sensational. Raft later admitted "she stole everything but the camera." 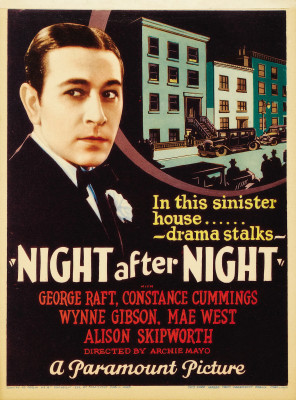 At the speakeasy/swanky nightclub one night, Joe falls for a socialite sitting alone, Jerry Healy (Constance Cummings, quite beautiful), she wistfully visiting the speakeasy because it was her childhood home, lost to creditors in the 1929 Wall Street Crash. Learning this, Joe offers to show her around though he's unaware that she's already engaged to older millionaire Dick Bolton (Louis Calhern), one of Joe's regular customers. Joe becomes determined to impress Jerry with his newly-acquired "class," inviting Mabel to join them for a swanky dinner as insurance.

The evening's success, however, is threatened from three fronts: a jealous Iris, who arrives at the club armed with a handgun, determined to kill Joe; rival gangster Frankie Guard (Bradley Paige) and his men, determined to force Joe to turn over the profitable speakeasy to them; and the arrival of Maudie Triplett (West), an unapologetically hard-drinking, "loose" woman, the antithesis of strait-laced Mabel.

West's first big scene in Night After Night is something of a revelation. In her later, starring films West (who wrote or co-wrote all her later features) placed her on a pedestal as a sexually-dominant idol around whom men swarmed while she spouted double-entendres. In Night After Night, however, she plays a character based on "Texas" Guinan (1884-1933), a film actress and speakeasy club proprietress. West's Maudie is a completely uninhibited woman like West's later characters, but instead of a husky coyness, Maudie is vivacious and ready to party. Rather than finding her objectionable, Mabel finds Maudie's free-spirited nature both fascinating and liberating, a nice surprise, the pair raucously drinking the night away. (The next morning, the plump Miss West comes precariously close to a major wardrobe malfunction.) Watching Night After Night it's no wonder she rocketed to film stardom.

George Raft never considered himself much of an actor so much as a screen personality. Best remembered for his later career (and bad career choices) at Warner Bros. and later self-parodies of his screen image, Raft could be stiff and inexpressive but here, in his first starring role, he like West has a freshness that's disarming. He exhibits a more vulnerable, human side completely locked away in his later work. Gangsters trying (and usually failing) to class themselves up turns up often in the genre. In the later Brother Orchid, for instance, Edward G. Robinson tours Europe, buying up paintings and an expensive wardrobe in an attempt to acquire some class and legitimacy but fools no one, and in both films the protagonist reverts to his old ways, though Robinson's eventually becomes a monk (!) in a monastery. Roscoe Karns plays another iconic character of such films, the wise-cracking, even lower-brow lieutenant.

The film has an intriguing, slightly off-kilter air, this being a gangster movie a la Paramount, a studio hardly known for such films. They give Night After Night a more glamourous sheen than, say, the usual Warner Bros. crime film, and a lighter, emblematic Paramount touch. At the same time, bits of authenticity and timeliness shine through. West's part was originally conceived for Texas Guinan herself, but the studio balked at casting the flamboyant personality, supposedly because of her age (48 at the time) but probably as much or more for her notoriety. Raft himself, during his days as a sexually-suggestive dancer, worked at the 300 Club (called the "55 Club" in the movie), one of the speakeasys hosted by Guinan. Raft, for his part, briefly worked as a "wheel man" for the mob, and had been a childhood friend of "Bugsy" Siegel.

Besides West's provocative nature, from a pre-Code standpoint one of the interesting aspects of the film is the depiction of socialite Jerry. Initially, she's more amused by than attracted to Joe, she already resigning herself to marry Louis Calhern's millionaire to retain a style of living to which she has become accustomed. What turns the tide is not Joe's gentle nature or his attempts at appearing sophisticated but rather his flashes of violence when threatened by the rival gangsters, with Joe rushing in with his fellow gangsters, guns a-blazin'. Jerry very clearly finds this sexually arousing, a huge turn-on, though she doesn't want to admit this to herself.

Kino's Night After Night, licensed from Universal, presents the black-and-white, 1.37:1 standard film in a scintillating presentation, the transfer so impressive sharp that one can make out Constance Cummings freckles. It about as good as an early ‘30s title has ever looked in high-def. The DTS-HD Master Audio (mono) is also strong (the background music amusingly featuring "Everyone Says I Love You" from the recent Horse Feathers, and "Isn't It Romantic?" from Love Me Tonight, both from Paramount), and optional English subtitles are offered on this region "A" disc.

Supplements include a trailer (focusing on Raft's recent stardom while acknowledging West's performance) and an audio commentary track by critics Alexandra Heller-Nicholas and Josh Nelson.

Not at all the typical Mae West vehicle I was anticipating, Night After Night is a good pre-Code lighthearted gangster film featuring a sensational film debut by Mae West in a strong supporting part. Highly Recommended.