Code Red // Unrated // June 22, 2021 // Region 0
List Price: $29.95 [Buy now and save at Amazon]
Review by Stuart Galbraith IV | posted June 24, 2021 | E-mail the Author
Reportedly shot for just $25,000, The Strangeness is an ultra-low budget horror movie produced by former USC School of Cinema-Television students that was filmed in 1979-80. It was never released theatrically, going straight-to-VHS around 1985, where it developed a minor cult following. Filmed in 16mm, most of it is set in a dark mine or nighttime exteriors, and for a big chunk of the movie the characters use flares to find their way through mine shafts, lighting everything in bright crimson -- all of which must have made the film nearly unwatchable in those days of low-resolution analog videotape.

Remastered for Blu-ray release by distributor Code Red, the movie now looks as good as it should, but it's still pretty unwatchable for other reasons: talky script, generally amateur performances, a pervasive cheapness. Only the hardiest of hardcore fans of low-budget horror movies will have the patience to sit through it, but the film is interesting as an example of a time when a generation of inexperienced would-be filmmakers believed they could gain practical experience making a low-budget feature on their own, and use it as an entrée into "Hollywood," so they hoped.

For a time, that seemed like a practical way to enter the biz: shoot a feature on 16mm, have it blown-up to 35mm and find a distributor. Back in the day when, in suburban Detroit, I was busily shooting short films in Super-8 sound (often in black-and-white CinemaScope), I'd meet with other struggling young filmmakers. One Taiwanese-American teenager I met in his parents' basement (where he'd set up shop) enthusiastically chatted technobabble I couldn't fathom about miniature special effects and computers; Doug Chiang is now vice president and executive creative director at Lucasfilm. Another time I encountered several slightly older guys who enviably had graduated to the ranks of 16mm and were trying to put together their first feature film: Sam Raimi, Robert Tapert, and Bruce Campbell soon after did just that, with The Evil Dead launching their major careers.

Most of us, though, languished in the amateur leagues, like the kid whose parents financed a feature-length virtual remake of Jaws, all in glorious Super-8 sound. (That's one I'd like to see again.) Some of those I knew were supremely talented in one area, like stop-motion animation or special optical effects, but had no real outlet for their talent beyond short films that, at best, toured the 8mm and 16mm festival circuit.

The Strangeness is the type of feature film effort that would soon be transformed by the home video revolution, when that market erupted like Vesuvius and direct-to-video horrors became a viable market, albeit one with rapidly diminishing returns. The Strangeness is pretty terrible in many respects, but somewhat okay in others and, more to the point, that its makers got it made and distributed at all is a pretty remarkable accomplishment. 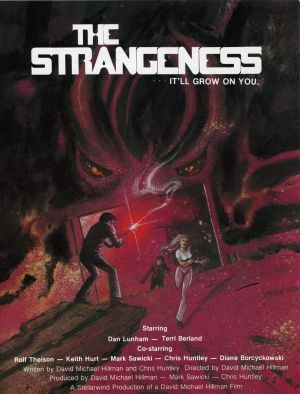 Somewhere near the California coastline, a group of mostly young explorers are investigating a long-shuttered gold mine, reportedly shuttered many decades before because of a supernatural menace lurking somewhere inside.

Most reviews for The Strangeness complain the film is almost unbearably talky and uneventful for its first hour, while acknowledging that it comes to life somewhat during its third act. The screenplay, by director David Michael Hillman (now Melanie Anne Phillips) and Chris Huntley (who plays a miner named Ruggles), is indeed chatty, reminiscent of The Incredible Petrified World (1959), but it deserves credit for trying to build credible characters of at least some dimension. Early scenes imply Dan as the film's protagonist, but when he's killed off midway through the film, that role falls to Calvert, a reluctant hero full of self-doubt. The characters never really develop beyond genre stereotypes, but they're more than ciphers.

Rather than film in nearby Bronson Caverns, the go-to location favored by low-budget filmmakers, nearly all the mine scenes utilized sets constructed in a family garage. These sets aren't very convincing, but similar caves and mine shafts on professionally-made TV shows (and even some films) have looked a whole lot worse. The stop-motion effects of the monster, credited to Huntley, Sawicki, and Ernest Farino (who also did the above-average title design, which effectively introduces the cast) are limited though ambitious. Huntley and Phillips are credited with the musical score, but some sources state their work was mostly redone by the original distributor, with John Carpenter-esque synthesizer themes dominating the background music.

The acting is mostly poor, with no one in the cast coming off better than the material, and few had much a career after. Keith Hurt, playing Morgan, spouts a laundry list of every cockney cliché (including, incredibly, "Well I'll be jiggered!") with a shaky accent that's almost believable in some scenes, outrageously unreal in others.

Filmed in 16mm, The Strangeness has been remastered, so that fans who've only known it through early, inapt home video formats finally have the chance to see it as it was meant to be seen. While it has its share of dodgy, slightly out-of-focus shots, most of the cinematography is above average for a movie this cheap, and in difficult lighting environments, no less. The mono audio is about what you'd expect for such a low-budget film.

Supplements are repurposed from an earlier DVD release. They include an audio commentary with Phillips, Sawicki, and Huntley; video interviews with all three, a photo gallery, and six short student films by Sawicki and/or Huntley.

Tough-sledding but not without interest for those intrigued by no-budget late-‘70s filmmaking, The Strangeness is a Rent It.