Icy Breasts (aka Someone is Bleeding)

Kino // Unrated // June 6, 2021
List Price: $24.95 [Buy now and save at Amazon]
Review by Stuart Galbraith IV | posted June 28, 2021 | E-mail the Author
An odd French psychological thriller that plays more than a little like an Italian giallo, Icy Breasts (Les seins de glace, 1974) was co-produced by and stars Alain Delon along with his longtime girlfriend, Mireille Darc (Weekend). Delon gets top-billing and is prominently featured in the posters, but that's deceptive as his is a secondary role. If this were an American film, Delon's is precisely the kind of part Robert Webber would have played, so much so I couldn't help but constantly think of Webber every time Delon was onscreen. The story was adapted from Richard Matheson's 1953 novel Someone Is Bleeding, also one of the film's alternate titles. 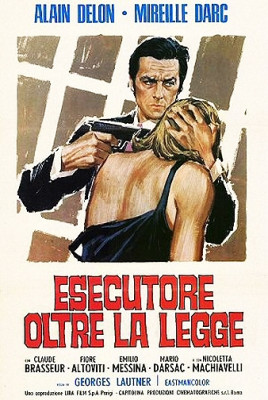 The main character of Icy Breasts is played neither by Delon nor Darc, but rather by Claude Brasseur, a busy character actor best known for his roles in films as varied as Band of Outsiders, Pardon Mon Affaire, and The Police War. Here he plays François Rollin, an underpaid radio dramatist working out of a small, seaside apartment in off-season Nice. On the beach he's surprised to encounter Peggy (Darc), who uncannily resembles a character he's just created. He tries flirting with her but she rebuffs his advances -- way out of line in the current generation but, hey, this was mid-‘70s France --though she doesn't exactly discourage him, either. Eventually, she invites him to visit her in her huge rented house.

Peggy seems deeply troubled, but is too reticent to reveal much. With François gently pushing Peggy into some kind of relationship, her shifty attorney, Marc Rilson (Delon), tries warning François off, claiming Peggy murdered her first husband, a drug addict, and that Peggy, addicted herself, is still in a fragile state-of-mind, having recently been acquitted on the grounds of temporary insanity. It is immediately clear Marc is also in love with Peggy, a fact he doesn't hide from his own unhappy wife (Nicoletta Machiavelli). François writes off Marc's actions to simple jealously, though it's clear Marc is controlling Peggy in various ways, often through two gorillas: chauffeur Steig (Emilio Messina) and bodyguard Albert (Michel Peyrelon). Marc's creepy brother, Denis (Fiore Altoviti), also seems to have designs on Peggy.

François thinks it best for Peggy (and his budding romance) to move her out of the giant, lonely mansion Marc is renting for her and into a smaller apartment. However, Marc's reach is such that Nice's best realtors refuse to rent to them. They end up at an out of the way high-rise, but no one seems to be around and they have trouble with the elevator, ending up in its subterranean parking garage in total darkness. There, François is knocked out cold by someone and Peggy lets loose a blood-curdling scream. And that's just the beginning.

Icy Breasts' scenes at that apartment building are genuinely disquieting, and the movie has its share of disturbing moments, but the film is too disjointed, illogical and unbelievable to completely work. The apartment building sequence itself makes no sense: Where is everybody? Who turned off the lights? Who's controlling the wayward elevator? Why has Marc rented that cavernous, three-story mansion for Peggy? He's supposed to be worried about her mental state, yet how could living so isolated in such a giant place (complete with elevator) possibly help?

Brasseur's everyman comes off pushy and annoying in the first act, though his fine acting sells the character eventually. François's blindness to Peggy's obvious mental illness is not remotely believable, but Brasseur lends the role a welcome tender humanity, offsetting the mostly enigmatic others.

Audiences expecting the usual Delon vehicle were probably disappointed that he doesn't even appear until about 20 minutes into the film, and only sporadically thereafter. It's not much of a part, Marc lingering around a billiards table so much that it becomes comical. Indeed, at times the movie hints at deadpan parody. Mireille Darc, a former model, was a limited actress, giving away too much without creating a believable character. I agree with one reviewer's comment on the IMDb that her part would have been better served by a better actress like Catherine Deneuve, one hard to resist and one that François would naturally want to protect, while also presenting more ambiguity about her mental state.

Licensed from StudioCanal, Icy Breasts is presented in its original 1.66:1 widescreen, a 4K restoration from the original camera negative. The image is sharp but with notably flat color, leaning toward browns and generally desaturated. This may reflect the overcast skies, or director Georges Lautner's intentions, but probably not. The DTS-HD Master Audio (mono) is adequate, and offered English-dubbed and in French with optional English subtitles. The English track matches the lip movements well, but the voice acting is terrible and best avoided. Region "A" encoded.

Far from the best work of any of the main principals, Icy Breasts is still engrossing for what it is. Flawed but entertaining. Recommended.