Kl Studio Classics // Unrated // May 18, 2021
List Price: $29.95 [Buy now and save at Amazon]
Review by Stuart Galbraith IV | posted July 6, 2021 | E-mail the Author
Madame Rosa (La vie devant sol, or "The Life Before Us," 1977) is a French drama lauded for Simone Signoret's performance in the title role, a Holocaust survivor and former prostitute in her sixties, caring for the children of current prostitutes in her Belleville, Paris sixth-floor walk-up. Wikipedia and other sources about the film make no mention of it, but the novel from which it was based, Romain Gary's The Life Before Us, was last year adapted again, this time relocated to Italy, for Edoardo Ponti's The Life Ahead (La vita davanti a sé), starring 86-year-old Sophia Loren, her first starring feature in 16 years. Signoret was only 56 when she appeared in Madame Rosa, but looks significantly older. The original film was a significant success, Signoret winning a César as Best Actress, while the movie won the Oscar as Best Foreign Language Film. 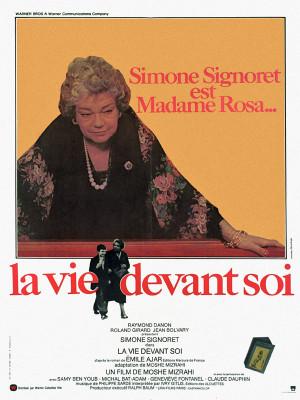 Rosa (Signoret) cares for children of all races and religions, with most of their prostitute mothers coming to claim them when they're not working. The major exception is Momo, an Algerian Muslim officially eleven but actually fourteen, a veritable orphan since his parents dropped him off when he was four and never returned.

Rosa is finding it increasingly difficult to manage the long flight of stairs leading up to her apartment, and Dr. Katz (Claude Dauphin), an elderly Jewish physician, warns Momo of Rosa's myriad medical problems, most alarmingly severe hypertension and advancing senility. Initially something of a troublemaker, Momo steps up as Rosa's condition worsens, and one day he follows her to the "Jewish" hideaway she's fashioned under the stairway, a kind of traditionally decorated studio she visits when troubled.

Things go from bad to worse: Rosa has been sending Momo to Monsieur Hamil (Gabriel Jabbour), a blind Muslim scholar who teaches Momo the Koran at the local mosque, but he develops dementia as well and can no longer teach or do much of anything else. Rosa experiences flashbacks of the Vel d'Hiv roundup, one afternoon matter-of-factly dressing and packing a suitcase, fearfully waiting to be shipped off to Germany. In her lucid state, she's terrified of going to the hospital and living there in a vegetative state, concerned doctors might experiment on her in her helpless state. Momo toys with pimping himself or other women, but Rosa makes him promise not to do that. Eventually he befriends a film editor, Nadine (Michal Bat-Adam, wife of the film's director) and her colleague or boyfriend (the film isn't clear about this), Ramon (director Costa Gavras), but their motives in befriending the boy are ambiguous. They record him talking about his life on a reel-to-reel tape recorder, perhaps mining his thoughts for a future film project.

Simone Signoret's performance dazzles, but Madame Rosa as a whole is equally impressive. The movie works because it's never once sentimental. (I haven't seen the remake with Sophia Loren, but can imagine how that might be, in spades.) At the time, the movie got a lot of attention because many saw it within the context of Arab-Israeli conflict, though just as it's not sentimental, neither is it preachy or draws obvious parallels in microcosm. Indeed, except for one amusing extended scene, with Rosa switching Momo's identity with a Jewish ward, claiming to have accidentally raised an Arab boy as a Jew, outraging the long-absent father coming to claim his long-forgotten son, Madame Rosa really isn't about the Arab-Israeli conflict or religious tolerance except on the periphery, and barely that.

Rather, the film is mostly concerned with people needing to care for and be cared by others, with Rosa clear-headed and honest about her sordid past and present, living in an almost third-world part of Paris amongst its hookers and junkies and transvestites, Arabs and Jews, blacks from Senegal and Ethiopia, etc., with Rosa holding to racial and religious stereotypes to some degree but basically nonjudgmental of her equally downtrodden neighbors. The film is also more about coming to terms with physical and mental decline in one's old age, and reconciling with one's past.

Armed these themes the movie becomes quite powerful, the kind of picture one begins with only mild interest but which, by its third act, has sucked you in and you find yourself genuinely concerned about the fate of its characters. And because Madame Rosa is full of ambiguity, it strenuously avoids dramatic clichés and steers clear of unearned emotion, so that at the end it becomes quite moving.

The Israeli French director, Moshé Mizrahi (1931-2018) is somewhat forgotten today; his output was small, just 14 features, though three of those I Love You Rosa, The House on Chelouche Street, and Madame Rosa were nominated for Academy Awards as Best Foreign Language Film. This film was a big success in France and made $5.2 million, several times its cost, in the United States alone.

At the center of it all is Simone Signoret (1921-1985), like Loren a one-time sex symbol (often playing earthy prostitutes early in her career), born to French-German parents (her father was Jewish). Her long career included many French classics like Jacques Becker's Casque d'or (1951), Les Diaboliques (1954), Jean-Pierre Melville's Army of Shadows (1969), and a handful of English-language films, notably Room at the Top (1958), for which she won an Academy Award, and Ship of Fools (1965), in that playing a Jewish refugee. Her husband, equally famous actor-singer Yves Montand, advised her against accepting the part of Madame Rosa but, wisely, after an entire year of negotiations, she finally relented.

Kino's new Blu-ray of Madame Rosa is derived from a new 4K master, the film presented in its original 1.66:1 widescreen aspect ratio. The transfer is just about flawless, preserving cinematographer Nestor Almendros's lensing. The DTS-HD Master Audio (2.0 French mono) is fine, and the optional English subtitles are very good on this region "A" encoded disc.

The lone supplement is an informative audio commentary by film historian Kat Ellinger.

Madame Rosa holds up well, its power undiminished more than 40 years after it was made. A DVD Talk Collectors Series title.