An okay Bob Hope comedy, good relative to the kind of movies he was doing by this time, Alias Jesse James (1959) has a few unusual qualities. Hope and his brother Jack produced the film independently for release through United Artists. Nevertheless, the production utilized the services of Hope's longtime home studio, Paramount. The credits bill Paramount department heads and so forth, while Paramount's backlot Western streets (with its distinctive "mountain" in the distance, is where a lot of the action was filmed.

Hope had been a Top Ten box office star 13 years running, from 1941 through 1953, but tastes were changing rapidly, and Hope increasingly turned his attentions to television. In movies he joined the vogue for biographical films with The Seven Little Foys (playing Eddie Foy, 1955) and Beau James (playing Jimmy Walker, a rare dramatic turn, 1957), but his standard comedy output was starting to fizzle with unmemorable works like That Certain Feeling (1956) and Paris Holiday (1958).

Alias Jesse James is an obvious attempt to reignite the comic juices that flowed so abundantly in The Paleface (1948) and especially its follow-up, Son of Paleface, Hope's best comic Western. Alias Jesse James was likewise a reaction to the huge popularity of TV Westerns in 1959, when an astounding 30 Western TV shows aired weekly in Prime Time. 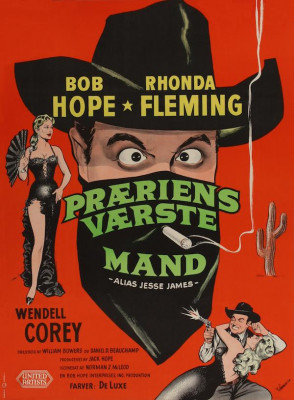 Hope plays Milford Farnsworth, an inept, bumbling insurance salesman about to lose his job when a J.W. James, in fact the notorious outlaw Jesse James (Wendell Corey), buys a $100,000 life insurance policy, paying the premium, $30,000, in cash he stole in a recent train holdup. At first, Farnsworth's boss, Titus Queasley (Will Wright), is delighted. But when he learns the policy holder's true identity, Queasley angrily orders Farnsworth to follow James out west to return the premium and/or protect the outlaw from harm, lest the company have to pay out and face financial ruin.

In fact, James plans to fake his own death, collect the hundred-grand, then run off with his longtime gal, saloon girl Cora Lee Collins (Rhonda Fleming). Farnsworth's arrival delights James, he figuring the bumbling insurance salesman would make an ideal corpse to take his place on Boot Hill.

The film has its share of problems. Hope's character is supposed to be the same bright-eyed but inept young lad he'd been playing since the 1930s, but in 1959 Hope himself was pushing sixty, making what was funny and fresh twenty years before now seem stale and even unseemly. And while in some of his last films Hope played a married man with teenaged kids, he never really changed his basic screen persona while the times and tastes changed all around him, right up until his last starring film, the bizarrely anachronistic Cancel My Reservation, in 1972.

Son of Paleface benefited mightily from Hope's co-stars, spunky and sexy Jane Russell and singing cowboy Roy Rogers, his clean-cut image left intact in that delightful Western spoof. Rhonda Fleming is beautiful, but neither she nor Wendell Corey are anything like on that same level. Corey had appeared in Westerns but not especially known for that genre, the actor appearing in varied roles in all kinds of movies. With his cold, steely blue eyes, Corey sort of looks the part (if too old for James, who was gunned down at age 34; Corey was 45), but the part seems to cry out for a charismatic actor more associated with the genre, perhaps somebody like Sterling Hayden or maybe Lee Van Cleef, etc. Further, the part is inconsistently conceived, at times threatening, humorously cynical, and blundering.

(Spoilers) For Western genre fans, the main draw for Alias Jesse James are the parade of cameo appearances by TV and movie Western stars, but even these are unimaginatively done. Coming to Farnsworth's aid at the climatic shoot-out are, in quick succession, Hugh O'Brien as Wyatt Earp, Jay Silverheels as Tonto, James Arness as Marshal Matt Dillon, Gail Davis as Annie Oakley, Ward Bond as Maj. Seth Adams (from Wagon Train), and Fess Parker as Davy Crockett. Roy Rogers appears as himself, while Gary Cooper appears in Western garb, supposedly playing Will Kane from High Noon, though dressed in different wardrobe (if wearing a badge). Reportedly James Garner as Brett Maverick and Gene Autry as himself also filmed brief cameos, but their short appearances -- none could have taken more than an hour to do -- were either cut prior to the film's release, or later on for legal reasons. (There is one abrupt cut in the film suggesting one or the other was included in the original theatrical release version.) Bing Crosby, invariably, also cameos.

Where before the cameo appearances in Bob Hope's comedies were often very funny*, in Alias Jesse James they're just crammed into the climax, each star repetitively firing their gun and -- most uncharacteristically -- blowing away the smoke from the end of each gun barrel, a genre cliché few if any of them ever did.

At some point Hope acquired the rights to many of his own movies but apparently was too cheap to store them properly (or something) as more than a few have been a struggle to restore properly for home video. Licensed from MGM, Alias Jesse James, presented in 1.66:1 widescreen, is watchable but only just. Title elements, dissolves and other optical-heavy shots are soft and grainy at once, while straight cuts are barely acceptable, a very blah transfer. The DTS-HD Master Audio (mono) is adequate, and optional English subtitles are available on this region "A" disc.

Considering how Kino will commission an audio commentary for even the direst films, it's surprising here that the lone supplement is a trailer.

*My personal favorite is Bob Crosby in Road to Bali. Bing is lost in the jungle when, out of nowhere, his bandleader sibling steps into the frame, fires a rifle, and without a word disappears back into the foliage. "That was my brother Bob," Bing explains, "I promised him a shot in my next picture."