Stranger on the Run

Stranger on the Run is a 1967 TV-movie, notable for several reasons. For starters, it was directed by Don Siegel (Invasion of the Body Snatchers, Dirty Harry), using an unusually good teleplay by Dean Riesner from a story by Reginald Rose. Stars Henry Fonda and Anne Baxter were at this point still more movie- than TV-names, though each had done a fair amount of television since the ‘50s. Further, one of its more recent admirers is director Quentin Tarantino, who considers it Siegel's best Western and is particularly fond of co-star Michael Parks's performance, though this reviewer feels precisely the opposite about Parks's work here, which is the film's weakest link.


Still, it's way above average for a ‘60s TV-movie (as were Siegel's other two ventures into this format), and an interesting pickup by Kino, presenting a near-flawless presentation of the film in high-def. 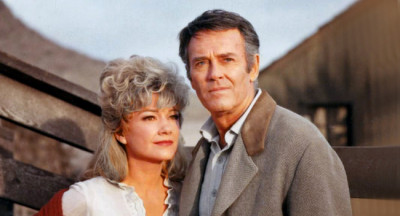 Alcoholic ex-con Ben Chamberlain (Fonda) rides the rails like a hobo, into a small, remote railway town, hoping to locate Alma Britten, daughter of his former cellmate, who believes she's in some kind of danger. Ben finds temporary employment at Berk's (Walter Burke) general store, with Ben paid in whisky, but his inquiries about Alma are greeted with hostile evasiveness by railroad deputies Leo Weed (Tom Reese), Larkin (Zalman King), George Blaylock (Sal Mineo), and others, who beat Ben just for asking about her.

Their leader, Vince McKay (Parks), stops them short of killing Ben, but is not particularly sympathetic toward the stranger, and neither is McKay's aging deputy, Hotchkiss (Dan Duryea). Alma (Madlyn Rhue), working as a prostitute, has been beaten and apparently gang-raped by the bored railroad deputies, and when Ben sneaks up to her remote cabin, he finds her dead, strangled.

Ben immediately realizes that he'll be made the scapegoat for the murder, undoubtedly committed by one of the railroad deputies. Sheriff McKay, anxious to avoid bad publicity for the railroad company, is only too happy to pin the crime on Ben, seemingly a homeless rummy who won't be missed. Ben flees into the desert, eventually meeting up with black cowboy Dickory (Bernie Hamilton) and later widowed rancher Valvera Johnson (Baxter), whose teenage son, Matt (Michael Burns), worships McKay and is just itchin' to join the vigilante party.

As noted above, Michael Parks's McKay is distinctive but distractive and even ludicrous. To Siegel's displeasure, he insisted on wearing a big, walrus-like mustache (probably historically accurate, like those in Tombstone) but the real problem is Parks's overt actorly mannerisms. He mumbles his lines like Brando, at times to the point of being incomprehensible. Beyond hiding behind that mustache, Parks also has a habit of lowering his head in scenes, hiding his face behind his black hat, and he often turns away from the camera in dialogue scenes with other actors. In one key scene with Duryea, the camera only catches his face in long shots; in close-ups he deliberately turns away and/or hides behind his hat brim.

Like Siegel's earlier remake of The Killers (1964), Stranger on the Run pushes the boundaries of the Television Code with mostly bloodless but implied violence, chiefly rape and sexual violence, and vigilantism and threats of lynching. The ambiguity of nearly all the characters is unusual and interesting, especially Fonda's character, whom one wrongly suspects, is either a master gunfighter masquerading as a drunk, or one that will sober up back into one. Instead, he really is just a lowly drunk simply trying to do an ex-cellmate a favor, swept into a potentially fatal situation he never could have imagined. Though saddled with a distracting, mismatched hairpiece, Fonda plays him that way, and his reactions of bewilderment at all the ruckus over Alma, and later his own surprise at being just able to stave off the bloodthirsty men after him adds a unique wrinkle to Fonda's Western filmography.

Almost everyone attached to Stranger on the Run had extensive backgrounds in theatrical features. Producer Richard E. Lyons started out with feature Westerns including Sam Peckinpah's great Ride the High Country, Rose had written 12 Angry Men and Man of the West, Duryea and Mineo were screen veterans like Fonda and Baxter. This was Fonda's first TV-movie, though he had starred, sort of, in Western TV show The Deputy (1959-61), but only played the leading character in 19 of its 76 episodes, though he did narrate or briefly appear in the others. Fonda's presence may well have helped facilitate the show's fine cast, and amped-up everyone's game, Parks's anomalous performance notwithstanding.

In the mid-‘60s Universal was the leading producer of made-for-TV features, simultaneously eyeing releasing such product theatrically outside the U.S., as this one was. From a production standpoint, its TV origins (and limitations) are apparent here and there, though like the best produced Western series television of the time, shows like Gunsmoke and The Virginian, the production values are remarkably high for something done for that medium.

Anne Baxter is one of those rare actors that started out with a string of excellent performances (e.g., in The Magnificent Ambersons) before inexplicably becoming worse through the years (e.g., The Ten Commandments). One senses an awareness of the intimacy of television has her much more restrained here. She overacts some scenes, but is quite good in others. Walter Burke was often typecast in embarrassing roles, often playing rascally Irishmen; Stranger on the Run gives him a rare, meaty part, and he's excellent, as is Duryea. Sal Mineo is little more than one member of the railway gang, a real comedown for the Oscar-nominated actor, though Mineo's fine.

Clearly Siegel was instructed to frame Stranger on the Run two ways: 1.37:1 standard frame for U.S. network television, and 1.66:1 widescreen for release abroad. I think the show would come off a little better widescreen than standard frame, but regardless the transfer looks great: impressive high-def resolution and strong, vibrant color. The DTS-HD Master Audio (mono) is adequate, and optional English subtitles are available on this region "A" disc.

Not a lost classic but still a welcome release and way above average for a TV-movie-of-the-week, Stranger on the Run is Recommended.