I'd been curious about Just a Gigolo (Schöner Gigolo, armer Gigolo, or "Nice Gigolo, Poor Gigolo," 1978) for decades, and the best thing I can say about it is that this curiosity has been duly satiated. Widely panned, even by its star, David Bowie, the movie is all style and no substance. I couldn't wait for it to end.

Nevertheless, the movie has an irresistible cast, most famously 76-year-old Marlene Dietrich in her final film role. Other than a brief cameo appearance in Paris When It Sizzles (1964), she hadn't acted in films since Judgment in Nuremberg (1961). (Though the liner notes for the Blu-ray refer to that as a "cameo," in fact she had a substantial role.) During this period, Dietrich became a hugely popular cabaret star, working closely with Burt Bacharach and performing before large audiences, but that ended in 1975 when she was injured in a fall, and thereafter became a recluse, almost never leaving her Paris apartment. Her two scenes in Just a Gigolo almost by themselves make the film worth seeing. 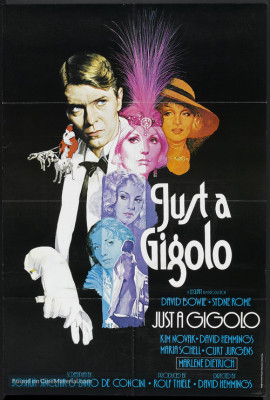 Just a Gigolo was a West German production, though directed by English actor David Hemmings, who also appears in the film as a Hitler-like fascist. Set in 1920s Berlin, Dietrich, in fact, was the only actual Berliner in the main cast, and she refused to leave Paris for the movie. English, American, Swiss, and Austrian stars dominated, with Germans in lesser roles.

Bowie plays Prussian military aristocrat Paul Ambrosius von Pryzgodski, who returns home from the Great War to Berlin after a long stay in a French hospital, and after his mother, "Mutti" (Maria Schell), had mistakenly been informed that he was dead. Paul finds Berlin in the depths of an economic depression, Mutti forced to find work at a Turkish bath and rent out rooms of their once palatial home. A childhood friend, militant socialist Cilly (Ohio-born Sydne Rome), is madly in love (or maybe just lust) with Paul, but she abandons her political ideology for a lucrative career on the stage (and, later, in Hollywood films) while also becoming the mistress of an aristocratic Prince (Curt Jurgens).

The aimless narrative follows Paul as he looks for work himself, for a time falling in with fascist war veteran Capt. Hermann Kraft (Hemmings), whose efforts in the early Nazi movement largely mirror Hitler's in the 1920s. Later, Paul goes to work as a gigolo for the Baroness von Semering (Dietrich), eventually becoming a "kept man" for wealthy widow Helga con Kaiserling (Kim Novak).

Another reason for reviewing Just a Gigolo was that my wife, Yukiyo, is an ardent, lifelong David Bowie fan and, like me, she'd been curious about it for decades. But even she found Bowie's performance amateurishly awful, and the movie so terrible she slept through big chunks of it.

Movies about 1920s Berlin were, curiously, in vogue during the 1970s, Just a Gigolo striving for something between the film of Cabaret (1972) and Ingmar Bergman's The Serpent's Egg (1977). Lavishly produced like those films, Just a Gigolo is visually interesting, especially an opening sequence integrating period stock footage of Bowie wandering about like Woody Allen in Zelig.

The main problem is the script by Ennio De Concini and actor-writer Joshua Sinclair. All of the film's characters are colorful but not one of them is ever once fleshed-out beyond cardboard. Subsequently, no one is remotely interesting, including Bowie's Paul. I didn't find him interesting, I didn't care whether he could find work in 1920s Berlin, I wasn't interested in his life as a gigolo -- nothing. Partly, I think this is because Paul himself just sort of passively floats through the narrative, driven by circumstances, pulled this way and that, but lacking in any kind of resolve or needs or belief in anything, and Paul and/or Bowie is never convincing.

Hemmings's approach to the material is peculiar, at times seemingly emulating the sardonic humor of directors like Richard Lester, at other times aiming for a darker, tragic air that never works, either. Kraft's followers are depicted as comically inept, in scenes of almost slapstick comedy. Those with Novak are simply tacky, her character sexually aroused by military jargon and pomposity, though Novak herself was still quite sexy. Curt Jurgens has one good scene with Bowie, hovering threateningly over the naked lad as he soaks in the Prince's bathtub, Jurgens both friendly and sinister at once. Others, like Maria Schell, are simply wasted.

Dietrich's two scenes are like an oasis in the desert. In the first, she interviews Paul and talks about what it takes to be a gigolo. Good editing here disguises the fact that they played their scenes hundreds of miles and months apart and never actually met. (Dietrich apparently thought highly of Bowie, however, reportedly even playing the B-side of his album Low to friends.) Wearing heavy clothes, hidden under a veil, and wearing lots of makeup, Dietrich looks weakened by ill-health and injury but her appearance is quite touching and she looks younger than she actually was. In her second appearance in the film, however, she's shot from a less-flattering angle, when in the nearly empty bordello she sings the film's title song. Her voice is weak yet expressive, a bit like Julia Morkan in John Huston's The Dead. (Dietrich singing voice was unremarkable in the best of times, but as a performer of songs she was almost peerless.)

The troubled production of Just a Gigolo is legendary. The IMDb and other sources claim, apparently falsely, that a) much of the original negative was destroyed in a fire, and that Hemmings had to piece together the film based on what survived; and that, b) it was filmed before Bowie's The Man Who Fell to Earth. Neither of these things is true, but the film did initially open with a running of 147 minutes, but then cut by Hemmings to its official 105-minute running time, which is what's presented here. The video transfer is okay but disappointing, with grainy optical shots and with most of it poorly contrasted and rather washed-out throughout, with exceptionally weak blacks, though other colors come through fine. When Just a Gigolo was excerpted in the documentary Marlene those scenes were extremely grainy and soft-focus, so those responsible for this remaster may have struggled trying to minimize some of that. The DTS-HD Master Audio (2.0 mono) is better, and optional SDH subtitles are provided on this region "A" disc.

The good selection of supplements includes a fat, 30-page booklet with liner notes by co-writer Sinclair and essayist Graham Rinaldi, An audio commentary features Rory MacLean, assistant to director Hemmings on the film, and a 28-minute "Making Of" documentary features both MacLean and Sinclair. A long trailer is also included.

Quite terrible but interesting for its cast, especially Marlene Dietrich in her last film role, Just a Gigolo is a Rent It.