The Widow Couderc (Le Veuve Couderc, 1971), previously available on DVD as part of an Alain Delon boxed set, is an outstanding intimate character study of two desperate people in 1930s France. Not a whole lot happens in this film running less than 90 minutes, but the scenes between Delon and Simone Signoret, playing the title character, are fascinating and beautifully acted. The disc itself is likewise exceptional, a near-flawless transfer that makes this now 50-year-old movie look brand-new. 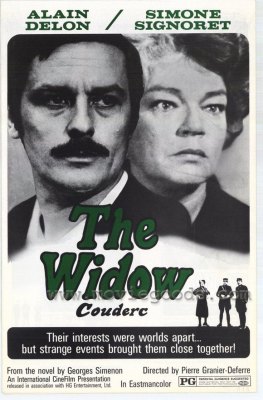 Adapted by director Pierre Granier-Deferre from the Georges Simenon novel, The Widow Couderc is set in 1934 France and explores an engrossing relationship between the mysterious, handsome Jean (Delon), who may be an escaped convict, and the "widow Couderc" (Simone Signoret), a much older peasant farmer - Delon was 35 at the time, she was 50 but looks older.

A former servant to a family whose father and son raped her in turn; the widow eventually married the latter and, after his death, inherited a house on one section of property bisected by a heavily traversed canal. In the opening scene, Jean helps the widow carry a heavy incubator back to the farm, and she offers him a temporary job as a farmhand. (The film may have been an influence on Yoji Yamada's excellent if more sentimental A Distant Cry from Spring, 1980. The two would make an interesting double-bill.) The father who raped her and longs for her still also lives in the house, she caring for the mostly senile old man to ensure that the home, that he technically owns, isn't taken away from her. The bitter sister-in-law uses Jean's arrival as an excuse to remove the old man from the home.

The arrangement between the widow and Jean is scandalous within the rural, gossipy village, dominated by older, unhappy (and perhaps envious) women peering through windows and old farmer men, some of whom have joined France's fascist movement against the local Jews and Yugoslavs particularly. (Even the local church warns, "The House of God is Not for Jews.")

Eventually the pair become unlikely lovers. However, Jean is also attracted to the sister-in-law's 16-year-old daughter (Ottavia Piccolo), the village slut who doesn't let her out-of-wedlock infant son get in the way of her sexual proclivities. The widow is deeply hurt by Jean's affair with the young guy, but he's so forthright and honest about it she begrudgingly accepts it, as a condition to keep Jean on the farm.

The film and the two leads do a marvelous job conveying a sense of time and place; they're not only completely believable as star-crossed lovers, Signoret is totally convincing as a peasant farmer occupied with mundane, daily chores, and both the script and the production design (by Jacques Saulnier) play extremely authentic to the period. A genuine atmosphere of prewar France is conveyed, and the fascist undercurrent has townsfolk assuming Delon's character is a Communist or a Jew or some other political undesirable.

Delon gives a fascinatingly enigmatic performance, saying little but stating much with his simple actions, and he's quietly intense in a manner reminiscent of the actor Robert Shaw. It's a unique characterization; the audience never really knows his identity, or precisely what crimes he may have committed, if any. He's guarded yet completely honest with the widow, even about his dishonesty, if that makes sense. She recognizes that he's not a farmer, yet admires his ability to work as hard and well as one, to solve problems around the farm, like fixing the incubator. She's aware of the scandal their arrangement causes, yet enjoys it without ever saying so. In one great scene she launders his clothes at a covered area along the canal (a really authentic-looking piece of history here), and as older women also washing clothes stare at her judgmentally, she makes a point of holding up his shirt, his pants, as if to say, "See? I'm having sex with this guy!"

Both Signoret, in her middle age, and Delon, at the peak of his career, were both admirably taking all kinds of chances with their careers. Can you imagine any top male Hollywood star of the early '70s - let along today - willing to risk their image by falling in love with an aging hag?

The film makes superb use of its unique location, a village/commune called Cheuge, in the Cote-d'Or departement of eastern France. Also noteworthy is its lovely, delicately spare score by Philippe Sarde (Tess, numerous films with Bertrand Tavernier)

Featuring a 4K restoration of the original camera negative, the 1.66:1 widescreen The Widow Couderc looks superb, with accurate colors and especially impressive texture that captures every emotion on the actors' faces as well as all of the village's buildings and foliage in helicopter shots. The DTS-HD Master Audio (French mono) is likewise strong for what it is, and the English subtitles are excellent on this Region "A" encoded disc.

Supplements include a detailed, well-researched and thought-out audio commentary track by writer Bryan Reesman, along with a theatrical trailer.