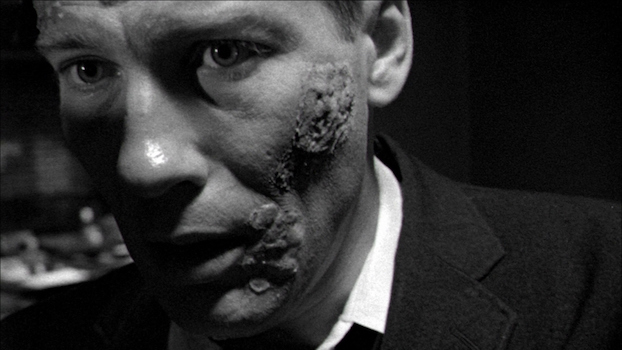 I first saw Todd Haynes's debut feature film, Poison, some time back in high school. It was when I was fully infatuated with the American indie scene, and the film's Grand Jury Prize win from the 1991 Sundance Film Festival was as persuasive to me as Siskel and Ebert's thumbs were to some other viewers.

I checked the video out from my local library, and I hated it.

More honestly, I probably just didn't understand it. But that initial reaction has made me wary of Haynes's output as a filmmaker, and my reactions to him have been fairly mixed ever since. (Sample likes: Far From Heaven, Carol. Sample dislikes: Velvet Goldmine, I'm Not There.)

Revisiting Poison for its thirtieth anniversary Blu-ray release, I find myself appreciating (and, sure, understanding) it much more. There are still moments that strike me as interesting concepts that could be more compellingly executed, but Haynes's crazy patchwork conjures a cumulative magic that is hard to deny.

One of the stumbling blocks for me in the old days is probably the way the film is touted as Haynes's reaction to the AIDS epidemic. This is no doubt true, but the film is far less literal-minded about the topic than teenage me was expecting. Instead, Haynes refracts his ruminations on illness and outsider-dom through three unconnected, stylistically different vignettes. Haynes doesn't run these stories back-to-back; they are intercut, almost as though some omniscient being was flipping between three wildly different channels. As a younger viewer, I was waiting for these three stories to somehow start connecting or echoing each other, but Haynes only lets the subtlest of imagery bleed over from story to story. As smart as I thought I was, Poison required just a little too much thinking for me to get it at the time.

(One might be inclined to assume that a high school-age cishet dude in the '90s might have also been alienated by the fairly explicit gay sex scenes in the film, but I had probably already enjoyed Gregg Araki's The Living End and Antonia Bird's Priest at this point. So no biggie.)

The first thread -- dubbed "Horror" in the end credits -- is a black-and-white pastiche of '50s and '60s B-movies. Larry Maxwell plays a scientist who distills the human sex drive into a serum and then inadvertently ingests the serum when his attention is diverted. Gradually, pus-filled growths begin to appear on his face -- and it's contagious. This portion of the film is the most obviously allegorical to the AIDS crisis, with certain one-to-one connections. The pus-filled growths can't help but suggest the lesions that cover the bodies of patients weakened by AIDS, while Maxwell's infamy in the papers as the "Leper Sex Killer" seems akin to the press's eagerness to dub AIDS as "Gay Cancer."

The second thread -- dubbed "Hero" -- is a fake documentary in the tabloid TV vein. It concerns a young boy who shot his father and killed him, then disappeared. His mother (Edith Meeks) claims that he flew out the window, up and away. Through the use of talking heads with various uncomprehending townsfolk, this section shows alienation from the other side. The young boy is infamous and widely hated by the town in which he lives long before the violent event in question. This approach also teases viewers with the promise of a potential mystery to solve and secrets to be revealed. Some revealing things definitely come to light, but "Hero" eventually subverts the form of the tabloid investigation and goes off in a subjective and poetic direction.

The third thread -- dubbed "Homo" -- almost fully concerns subjectivity and poetry. Riffing on the writing of Jean Genet -- who is also quoted onscreen throughout the film -- this section follows a twisted romance inside a French prison. Scott Renderer is an inmate who recognizes a new arrival (James Lyons, who also worked as the film's co-editor) as the grown-up version of a boy who intrigued and infatuated him in their reform school days. The story stays mostly inside the head of Renderer's character as his rekindled infatuation curdles into jealousy and obsession. The gray stone of the prison is counterpointed by offputtingly rose-tinted memories of youth; the flashbacks are excessively bright and colorful, especially when traumatic events are depicted.

While Haynes is clearly doing a visual riff on Un chant d'amour with the "Homo" section, it is arguably the section where character and story are stronger than the aesthetic concept. As someone who prefers Haynes when he is tied to a strong story -- rather than just playing in the genre sandbox -- there is a part of me that wishes he would have just made the feature version of the "Homo" thread.

But he didn't. And because he didn't, viewers are forced to reckon with why he didn't. All the facets of the film don't fit together neatly (or, in some instances, at all), but these competing outsider narratives create a dialogue that is more provocative and jarring (in a constructive way) as a mosaic whole. There are moments from Poison that have stuck with me for years, even though I didn't like the film. I expect there will be even more moments that resonate now that I do. 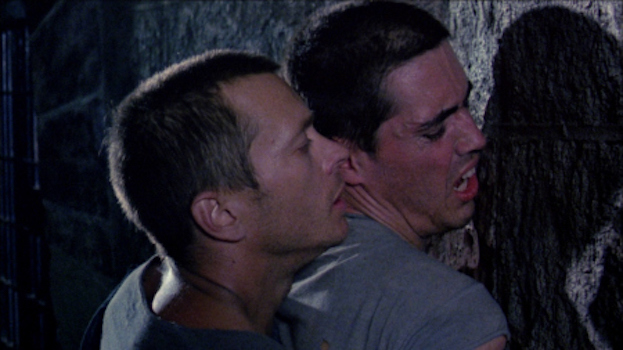 The Blu-ray
Poison is packaged with a booklet featuring an essay by Dennis Lim.

The Video:
In the bonus features, it is mentioned that the film was overseen by the filmmakers for a new film print and DVD release in 2010; one presumes this AVC-encoded 1080p 1.78:1 presentation is sourced from that master. It does not have the shockingly clean and crisp look of modern restorations. Not that that's a knock on the disc: arguably, the textures of the film -- plus the scratches and minor flaws -- are integral to what Haynes and Co. are trying to achieve. To clean them up would be a bit antithetical to the meta aspects of Poison. That said, the colors, contrast, and detail fluctuate throughout -- at least partly by design. A few of the shots in the fake-doc section have been stretched to fit the aspect ratio, but again this seems like a filmmakers' choice and not a flub.

The Audio:
The DTS-HD MA 2.0 soundtrack sounds a bit thin and hissy, but -- as with the picture -- this seems like the filmmakers leaning into the limitations of their low budget to create aesthetic effects. One subtitle option is provided: English SDH.

(HD, 10:40) - Haynes discusses the historical moment in which Poison was made, especially in the way that the world of experimental film and independent film were intermingling at that time.


Final Thoughts:
Todd Haynes's debut feature is a bridge between experimental and narrative film styles that also acts a manifesto for his concerns as a filmmaker. I've come to enjoy the narrative side of Haynes more than the experimental side over the years, but even I will admit that they are working pretty harmoniously here. Highly Recommended. 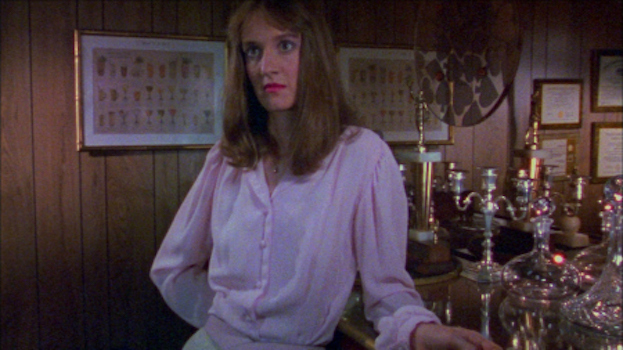