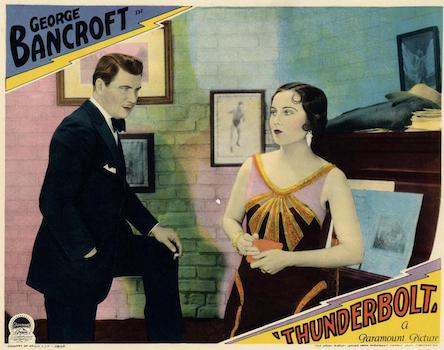 The 1929 crime drama Thunderbolt is a strange little picture that bears some of the fingerprints of its idiosyncratic director but sadly not enough. It is the first talkie for Josef von Sternberg, best known for his run of Marlene Dietrich vehicles, which would start with The Blue Angel in 1930.

Thunderbolt, on the other hand, is more akin to his silent crime pictures and it's headlined by George Bancroft, previously seen in von Sternberg's Underworld and The Docks of New York. Bancroft is the titular gangster, and he's sore that his long-time moll Ritzie (Fay Wray, of King Kong and Wildcat Bus) wants out of the underworld. She's taken a shine to straight-arrow bank teller, Bob Moran (Richard Arlen), and Thunderbolt plans to kill Bob. Thunderbolt's murder plot is thwarted by a sweet stray dog that starts following him and distracting him. He doesn't even see the coppers coming.

The second half of the film follows Thunderbolt on death row, where his thirst for revenge refuses to be quenched. Through his network of ne'er-do-wells, Thunderbolt gets Bob framed up for a murder but good. Soon, Thunderbolt and Bob are neighbors across the hall on death row. Will Thunderbolt be overcome by a late dose of conscience or will he let both of them fry in the electric chair out of spite?

von Sternberg seems much more in his element in the film's second half, where the cramped quarters allow him to pull off some striking angles and deep shadows. Most of the film, however, is simply a relic of the awkward transition from silent to sound filmmaking. Like a stereotypical early sound film, the action is mostly captured in bland wide and medium shots. Sure, there is a tracking shot or two, but nothing suggesting the grandeur of von Sternberg's upcoming work, like '34's The Scarlet Empress. The acting is also oddly pitched at two arbitrary levels: flat as cardboard or big as a house. Sometimes within the same dialogue scene. That said, credited dialogue writer Herman J. Mankiewicz (Citizen Kane) gets in some good lines that the actors manage not to over- or under-emote.

This flick is certainly worth watching for the curious viewer, if only to witness the many odd touches. For instance, that stray dog, whose arrival short-circuits a potentially suspenseful sequence for the sake of comedy -- Thunderbolt bizarrely gets down on all fours to shoo the dog away -- and essentially steals the show. There's an argument scene between Bob and his mother that devolves into an extended tickle fight on their bathroom floor. One prisoner on death row (S.S. Stewart) is given piano privileges, so he plays and sings mournful songs before opining, "I wish there were a way of telling when a human being's out of tune."

Many black performers appear in small roles throughout that are generally less stereotypical than usual for the era. Don't get me wrong: the roles are pretty broad and two-dimensional, but most of the film is that way anyway. One highlight: I Walked With a Zombie's Theresa Harris makes a particularly striking debut as a nightclub singer, performing "Daddy, Won't You Please Come Home?" 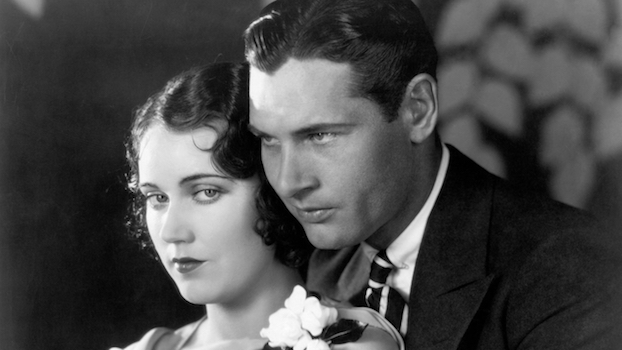 The Video:
This AVC-encoded 1080p 1.20:1 presentation looks fairly old and shows no sign of digital clean-up. Consistent scratches -- sometimes quite heavy -- and dirt throughout. Contrast and black levels are solid throughout. Detail fluctuates. It's watchable, but clearly could have used some TLC.

The Audio:
Considering its age, the DTS-HD MA 2.0 mono audio has held up much better than I expected. It is clearly limited, and portions of the dialogue are so muffled that the subtitles just read "(unintelligible)" during certain passages, but the layered ambience and musical performances are surprisingly robust. As stated, an English subtitles option [with a sprinkling of "(unintelligible)"s] is provided.

- One of Kino Lorber's better critical commentaries. Pinkerton offers an engaging mix of analysis and history, both related to the scenes onscreen and the film in general. A definite selling point for this disc.

Final Thoughts:
This one will probably be more interesting to viewers specifically exploring the early sound era, rather than folks just looking for a classic to watch. If early talkies are your bag -- or you're a Josef von Sternberg completist -- Thunderbolt has plenty of peculiarities to make it a worthwhile watch. The Nick Pinkerton commentary pushes this beyond a "Rent It" to mildly Recommended. 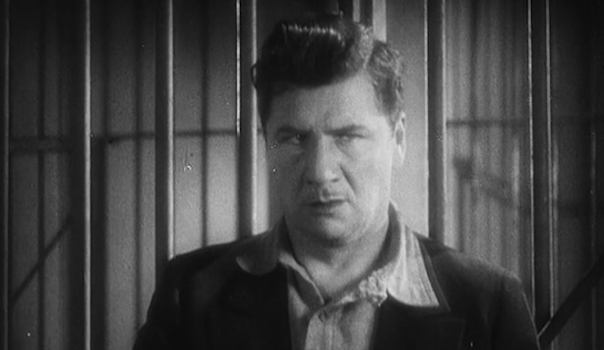