The Daydreamer (1966) was one of the first theatrical features of Videocraft International, better known today as Rankin/Bass, the little company behind some of the best-loved holiday specials, including Rudolph the Red-Nosed Reindeer (1964) and Frosty the Snowman (1969), plus the occasional feature or TV-movie, of which Mad Monster Party? (1967) and the made-in-Japan King Kong Escapes (1967) and The Last Dinosaur (1977) are perhaps the most familiar.

Based for many years in New York City, Rankin/Bass operated somewhat outside normal entertainment channels which, in turn, gave their productions a distinctive house style. That and the fact that most of the key talent remained a constant throughout their peak years: Romeo Muller wrote many of their scripts, while Maury Laws composed most of Rankin/Bass's musical scores. Though the company hired big Hollywood stars (though even there, their choices were often surprising) and familiar voice talent like Paul Frees, Rankin/Bass's animated special had a unique sound, partly the effect of them regularly hiring New York or Toronto-based talent like Paul Soles, Larry D. Mann, and Paul Kligman.

Co-founder Arthur Rankin, Jr. supervised the development of scripts and character designs, but nearly all the actual production was outsourced, typically to companies in Japan, frequently Tadahito "Tad" Mochinaga's MOM Production for stop-motion, and various companies like Topcraft, Mushi Production, and Toei for cell animation. (Among the contributing artists in this latter category was a young Hayao Miyazaki.)

The best Rankin/Bass productions are uniquely magical, with a look and concerns different from all other producers of family entertainment. The early Christmas specials all have catchy songs and lovely animation; it's surprising one or more hasn't yet been adapted for the Broadway stage. The Last Dinosaur, at the other end of the spectrum, about a Great White Hunter (Richard Boone) obsessing Captain Ahab-like over the last Tyrannosaurus Rex on the planet, deep in the Arctic, is weirdly compelling, even moving. 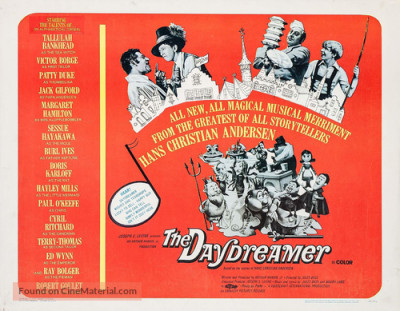 The Daydreamer falls somewhere in the middle of the Rankin/Bass oeuvre. It seems to have been equally modelled after The Wonderful World of the Brothers Grimm (1962), which integrated special effects and George Pal's Puppetoons with live-action material about famous fairy tale authors; and Mary Poppins (1964), the classic Disney film mixing animation with movie musical numbers. The Daydreamer has its uniquely Rankin/Bass-esque moments but suffers from an unfocused and drearily episodic script and undernourished production values that border on tacky, though there's much obvious effort to instill it with A-level class throughout.

Like Brothers Grimm, The Daydreamer juggles live-action scenes about a famous writer of fairy tales, in this case Hans Christian Andersen, with animated adaptations of roughly six of the author's famous stories. Here, we follow a teenage "Chris" (Paul O'Keefe, late of The Patty Duke Show), son of a poor cobbler (Jack Gilford) who, rather than study for school, runs away from home in search of the Garden of Paradise.

The chief cause of the film's clunkiness is the device that whenever Chris falls asleep, a HCA tale unfolds in animation form, based on Chris's thoughts at the moment he nods off. Since there are six adaptations, he falls asleep constantly, even though the film's story covers but a single day. The impression given is that poor Chris suffers from narcolepsy.

The stop-motion (here called "Animagic") segments are self-contained for the most part and are crudely dropped into the narrative. "The Little Mermaid," for instance, features the voices of Haley Mills as the title character, Burl Ives as Father Neptune, and Tallulah Bankhead as the Sea Witch. The animation is quite good; Mochinaga was an expert animating seemingly impossible things like ocean spray and heaving waves, and some of the set design is lovely. But in shoehorning the tale into Chris's larger story, and by limiting its screentime to just one segment of a larger whole, the tale drums up little interest, rushed and boiled down to its bare essentials, though it does play slightly darker than a Disney version in 1966 would have been. The next tale, based on "The Emperor's New Clothes," casts Ed Wynn (from Mary Poppins) as the foolish emperor, with Terry-Thomas (from Brothers Grimm) and Victor Borge playing the supposed tailors crafting the infamously invisible wardrobe. Again, some nice animation throughout, including an impressive climatic street parade, but uncompelling in terms of storytelling.

The live-action material is, if anything, even less interesting, with hapless cobbler Gilford harassed by demanding customer Margaret Hamilton, and later threatened with arrest by non-star Robert Harter (very amateurish) as Big Claus, the game warden, when the senior Andersen goes in search of his son. Really out of place throughout is Ray Bolger as a goofy pie man, the former Scarecrow never interacting with ex-Wicked Witch Hamilton but with Bolger maniacally dancing the streets most Bolgerly but without any clear purpose.

Though obviously made on a modest budget, the film shoots for a Disney-level respectability and classiness. The filmmakers went to the trouble of hiring Al Hirschfeld to create caricatures of the stars, who in live-action or animated form take curtain calls at the end.

Licensed to Scorpion Releasing from StudioCanal, which splits ownership of the Embassy Pictures library with MGM, the transfer is decent enough with uneven but generally rich color and a sharp image, but the presentation is 1.37:1 standard, instead of the cropped widescreen of its original theatrical bookings (presumably 1.85:1 but possibly 1.66:1 or even 1.75:1, as Disney preferred at the time). As is the case with all home video versions of Mad Monster Party?, it's not exactly ruinous as one gets to see a bit more of the stop-motion sets, for instance, but the framing does look "off" throughout. The DTS-HD Master Audio (mono) is reasonably strong for what it is. A region "A" encoded disc.

The one supplement is a new audio commentary by Lee Gambin and Rankin/Bass expert Rick Goldschmidt, a track definitely worth listening to.

A decent enough film for small kids, The Daydreamer falls short of classic Rankin/Bass, but there's enough there for interested parties to give it a look. Mildly Recommended.