Long presumed to be in the public domain, the Charles Bronson-starring, John Sturges-directed Western The Valdez Horses, also widely known as Chino (1973) turned up for years in DVD bargain bins, always with inferior video transfers.

Kino's excellent new Blu-ray release is loaded with great extra features while somewhat mysteriously offering two very different high-def transfers of the film. An open-matte 1.37:1 standard frame presentation, apparently licensed from StudioCanal, uses Italian title elements, though the film is entirely in English, and called Valdez il mezzosangue - Chino. That transfer is nearly perfect, with excellent color and virtually no damage. But there's also a 1.85:1 widescreen version from a different source with English title elements using The Valdez Horses moniker. That version is infinitely better in terms of framing and composition but is derived from what looks like a theatrical print. It has some obvious damage, especially at the beginnings and ends of reels, but otherwise is slightly preferable overall to the full-frame version. 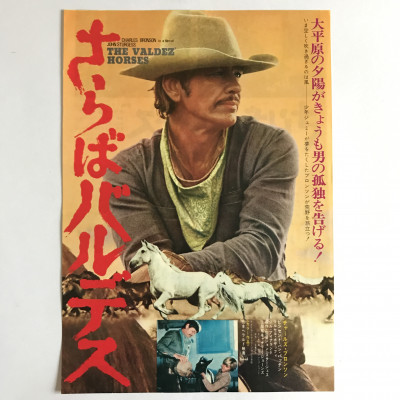 An Italian-French-Spanish co-production filmed in Spain and adapted by Clair Huffaker from the same-named novel by Lee Hoffman, The Valdez Horses opens with 14-year-old drifter Jamie (Vincent Van Patten) looking for work on a ranch in New Mexico. Arriving at sundown at the small mustang-breeding spread of Chino Valdez (Charles Bronson), Jamie is initially skittish about the brooding and circumspect "half-breed," but soon they grow fond of respect one another, Chino teaching Jamie his specialized but lonely trade.

Soon after, Catherine (Jill Ireland, aka Mrs. Bronson), a haughty Englishwoman, moves in with her brother, Maral (Marcel Bozzuffi, the assassin chased by Gene Hackman in The French Connection), owner of an expansive ranch a few miles away. Maral's land-grabbing activities includes all of what up to now had been Chino's ranch, where he lets his wild horses roam free until needed, but that conflict becomes secondary after Chino and Catherine fall in love, a relationship Maral will not permit under any circumstances.

Chino was made during the second phase of Bronson's career, a time in which he was a huge star in Europe and Japan, but whose movies played only the grindhouse circuit in the U.S. Prior to about 1967 he worked mostly in Hollywood, playing supporting parts in big movies and larger roles in cheaper films. From the mid-1950s Bronson always seemed on the cusp of super-stardom, but it wasn't until he began working in Europe that things finally began to click. Between 1967 and 1973 he starred in a number of European co-productions wildly popular there and in Japan but even now are lesser-known and generally dismissed by U.S. critics and audiences. These include starring roles in Farewell, Friend (with Alain Delon, 1967), René Clément's Rider on the Rain (1970), Sergio Sollima's Violent City (1970), Red Sun (with Delon and Toshiro Mifune, 1971), and the original (and far superior) The Mechanic (1972). Soon after Chino, Bronson starred in the widely misunderstood box-office smash Death Wish (1974), which turned his career around again with Bronson again based in Hollywood, starring in primarily U.S. productions. For several years he challenged Clint Eastwood as the Top Action Star of the 1970s, though by the early 1980s Bronson began a long association with Cannon Films, headlining cheap-but-luridly enjoyable schlock.

His role in The Valdez Horses matches his screen persona perfectly. Not exactly a chatterbox, Bronson's stoic demeanor matches loner Chino who, other than a tribe of Indians he once lived with, is resigned to his solitary life, relating to his mustangs more than people. Bronson's lined, leathery, working-class features and middle-aged but impressively muscular physique make him entirely believable as a working cowboy. Indeed, in the film it's clearly Bronson doing nearly all the dangerous-looking roping and taming of his wild horses.

Not unlike Bronson's other European career films but in contrast to what he did later, The Valdez Horses is more contemplative than action-packed, focusing most of its narrative of Chino's lonely life and his relationship with Jamie. In one, nearly entirely silent scene, Chino has gone to his former Indian camp to consider the problem of Maral's threats regarding Catherine. Bronson says nothing, staying out into space, but it's the kind of scene the actor was deceptively superb at: expressing much while seemingly doing very little. Coasting through his later Cannon films, Bronson was often compared to a cigar store Indian, but during his European period especially, Bronson was anything but wooden.

On the other hand, Jill Ireland often was, if not wooden, then certainly one-note in her film work with Bronson. They appeared in 15 films together -- way more than Spencer Tracy and Katharine Hepburn -- she often the price producers wanting to hire Bronson sometimes had to pay. She wasn't a bad actress, just limited, and sometimes she fit the bill, sometimes, as here, not at all. Needless to say, the idea of her and actor Bozzuffi, his thick Italian accent intact here, playing siblings pushes Valdez Horses to the cusp of fantasy.

Bozzuffi's role was originally intended for the great French actor Lino Ventura, with whom Bronson had recently starred in The Valachi Papers. Ventura left the project, and no wonder: the part is barely sketched, with even Maral's dislike of Chino never explained, let alone fleshed with any subtlety.

But The Valdez Horses is still an above-average Western, and the at-long-last decent video transfer may help it find new admirers.

Described in much great detail above, the 1.85:1 widescreen transfer, despite its considerable damage, is preferable to the far more pristine 1.37:1 open matte version, despite its superior color, etc. The DTS-HD Master Audio (mono) is equally good on both films, the 1.85:1 version probably sourcing the same audio used on the 1.37:1 version. No subtitle options on this region "A" encoded disc.

The supplements are unusually good. "Bronson in Almeria" is an on-camera interview with co-star Vincent Van Patten, who has lots of entertaining stories about Bronson and director Sturges. During the interview he mentions shooting a Super-8 (silent) short, Unknown Island while on location, and it's also included in its entirety. (Not mentioned anywhere is whether any of Bronson's kids or crew members appear in it, but it seems entirely possible.)

An imperfect but very fine Western at long last made pleasurable to watch on home video, The Valdez Horses is Highly Recommended.