The Emperor Waltz (1948) is one of director and co-writer Billy Wilder's least Wilder-esque films. Prior to its production, Wilder had spent many months in Europe, visiting Berlin, bombed back to the Stone Age, the concentration camps and looking at footage shot immediately after their liberation, all the while searching in vain for his mother and other Jewish relatives that doubtlessly perished in the Holocaust.

Initially, Wilder considered making a documentary about what he had seen there, but instead began developing with co-writer Charles Brackett a film about the American Occupation forces in Berlin, a project that eventually became A Foreign Affair (1949). A commonly held theory is that Wilder was so traumatized by the atrocities he had seen, that combined with survivor's guilt from having successfully fled Nazism in the 1930s, he made The Emperor Waltz, a confection as far removed from wartime horrors as could be imagined. (On the other hand, Wilder self-consciously avoided being typed in any particular genre. Up to then, he had directed a comedy, an espionage thriller, a film noir, and a social problem drama. Here was something completely different, yet again.)

The film is pleasant but far from great, partly intended as a tribute to Wilder's greatest influence, director Ernst Lubitsch, but one that even Wilder admitted didn't come off. There are signature Wilder touches here and there, and the film is interesting within the context of the director's larger career, and for its lavish production values, all in glorious Technicolor. 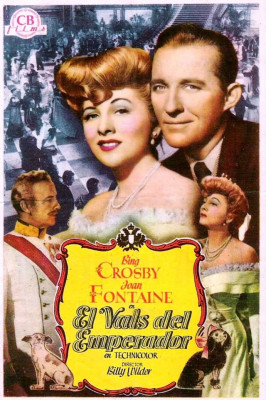 At the turn of the twentieth century, American gramophone salesman Virgil Smith (Bing Crosby) is trying to win an endorsement for this new invention from Austrian Emperor Franz Joseph I (an unrecognizable Richard Hayden, hidden under a bald cap and behind muttonchop whiskers). Finagling an audience with the Emperor, Virgil and his terrier mutt, Buttons, encounter Countess Johanna Augusta Franziska von Stolzenburg-Stolzenburg (Joan Fontaine), her father, the Baron Holenia (Ronald Culver), and their prized black poodle, Scheherazade. The Baron, having gambled away the family fortune, welcomes the Emperor's request to breed Scheherazade with his own poodle, as the alliance will ensure much-needed influx of cash.

However, Buttons gets loose and gets into a brawl with Scheherazade, traumatizing the bitch as an outraged Johanna lectures Virgil on class distinctions, canine and human. Later, however, Johanna requires Virgil's help when the Emperor's veterinarian (Sig Ruman) prescribes a meeting of the two dogs to work out their differences. And so, two parallel stories emerge: the reconciliation and romances of Buttons/Scheherazade and Virgil/Johanna.

The Emperor Waltz is usually described as a musical, but with just five songs it is more accurately described, by Wilder himself, as "a comedy with a scattering of songs." Lavishly produced at a cost of $4.1 million, a huge budget in its day, the film has gargantuan sets and lavishly costumed extras, but isn't quite the operettic fantasy one might reasonably expect. Wilder set out to make something historically accurate to its time and place, though Edith Head's costume design and the Natalie Kalmus-supervised Technicolor lean a little in that direction. ("Everything looked like it was in an ice cream parlor," Wilder later said.) On one hand, the film is set in Wilder's home country just before he himself was born, yet he denied the project was driven by yearning nostalgia.

Looking at The Emperor Waltz on its own terms, the picture is pleasant, amusing, and a good showcase for stars Bing Crosby, the agreeably unpretentious if pushy American everyman; and Joan Fontaine, the effervescently beautiful but icy snob der Bingle's charms (and singing voice) eventually win over. Though alert viewers can see it coming a mile away, Wilder (and Brackett) draw clever parallels between the two dogs that dislike one another and, eventually mate, with Scheherazade scandalously giving birth to three mutts, providing the film with a sexual subtext that seems tame today but which was initially rejected outright by Production Code censors.

The finished product was compromised by Crosby, the top box-office star in the country, using his power at the studio to enlist his own writers onto the set to "polish" Wilder and Brackett's dialogue. The result sounds right for a Crosby vehicle but, in his scenes certainly, only rarely plays like Wilder dialogue.

And, yet, the film has moments that, for such an expensive trifle, are unexpected, even startling. Class differences are a common, maybe even the most common theme of romantic musicals of the time, but Wilder surprises here with Bing's breezy confidence getting a gut-punching dose of reality from an unexpected source: a sympathetic but frank Emperor Joseph. And rather than face telling the Emperor about the "illegitimate" birth of the three mongrels, the Baron orders the royal vet to destroy them, and Wilder's camera lingers agonizingly as the German-accented vet, the only German-accented performance in the entire film, methodically takes them from its mother and prepares to drown them in a nearby sink. The water begins to fill up and it really looks like no one will get there in time to rescue them. This is played out so disturbingly matter-of-fact one can only imagine how this scene traumatized 1948 movie audiences who were anything but prepared for such casual cruelty in a Bing Crosby musical. It's as if, perhaps accidentally, perhaps by design, the climax of this innocuous musical in fairy tale Austria has suddenly transformed into a commentary about German crimes against humanity, even if they're newborn puppies.

Licensed from Universal, Kino's new Blu-ray of The Emperor Waltz utilizes an inconsistent but mostly lush high-def transfer, the rich Technicolor hues coming across with no matrixing issues. The DTS-HD Master Audio (mono) is above average and optional English subtitles are offered on this region "A" encoded disc.

Included is a brief excerpt from director Volker Schlondorff's longer interview, the brief clip only parenthetically touching upon The Emperor Waltz. Mostly in German with English subtitles, it's nice for what it is, but almost not worth the bother. Definitely worth the viewer's time is the audio commentary by film historian Joseph McBride, author of Billy Wilder: Dancing on the Edge. McBride goes into exhaustive detail about the events leading up to and through the production of the film, connecting it to other Wilder films and themes. It's an excellent track.

This is a film for two distinct audiences: those who enjoy innocuous 1940s movie musicals, particularly those starring Bing Crosby, and admirers of director Billy Wilder, for whom even lesser works paint a more complete picture of one the 20th century's greatest filmmakers. Recommended.