Ludicrous yet entertaining, building to a genuinely exciting climax, Four Frightened People (1934) was one of director Cecil B. DeMille's few flops of the sound era, a pre-Code adventure-melodrama about four strangers lost in Malayan jungle, each transformed by their experiences. Apparently a longer, 96-minute version was test-screened but never released, with 17 minutes trimmed when it opened in late-January 1934, five months before full enforcement of the Production Code, meaning Wikipedia and other sources are incorrect in stating the 78-minute version on this new Blu-ray was a shorter, censored version for release after the enforcement of the Code began. 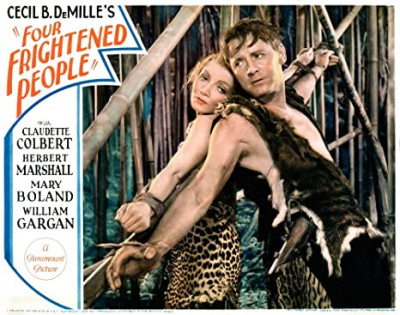 Off the coast of Malay, four passengers aboard a ship overrun with Chinese coolies slip away in a crude lifeboat, with radio star-journalist Stewart Corder (William Gargan), rubber chemist Arnold Ainger (Herbert Marshall), and socialite Mrs. Fifi Mardick (Mary Boland), a Pekingese in her arms, are fleeing a bubonic plague sweeping the ship. Unhappily, they're forced to take with them Chicago school teacher Judy Jones (Claudette Colbert), a mousy Old Maid-type whose screams threatened their nighttime escape.

They land their craft on a nearby island, but it's threatened with an outbreak of cholera, so they compel the village's only white man, Montague (Leo Carrillo) to guide them to the nearest port, an arduous trek through the thick jungle. Soon they are hopelessly lost, threatened by natives, poisonous snakes, and one another.

After having recently watched a similar but much grimmer and more realistic tale of survival in part three of Masaki Kobayashi's The Human Condition (1961), the plausibility quotient in Four Frightened People is practically nil. Mrs. Mardick uncomplainingly carries that pooch under her arm throughout the story, while the others can barely overcome the maze of bamboo, vines, and thick brush around every corner. Everyone's clothes quickly are dirtied and torn to the point where they have to fashion their own clothes. However, Colbert's character, bespectacled and without makeup early in the story, deep in the jungle gradually becomes glamorous and alluring, with makeup and a carefully styled hairdo. Her pre-adventure look is overemphatic, like Donna Reed's alternate universe character in It's a Wonderful Life; it's surprisingly Colbert doesn't play a stereotypical librarian. Gargan's radio star is a pushy braggart, a real Alpha Male-wannabe, while Marshall's chemist is brooding and weak.

(Marshall lost a leg during the First World War but hid his condition well throughout his film career, but the endless walking of his character and increasingly ripped trousers can't fully hide this. In many scenes Marshall is limping badly.)

The movie picks up considerable steam in its second-half, with Colbert literally shedding her schoolmarm wardrobe and appearance, taking charge of the men instead of following them around like a lost puppy. Colbert is much better in these scenes, which have a welcome sense of real danger lacking utterly in the film's first-half, scenes not unlike the perils previously found in movies like King Kong and Tarzan the Ape Man.

The pre-Code material most famously includes a semi-nude scene of Colbert, mostly silhouetted behind a waterfall as she bathes in the nude.

Licensed from Universal, Kino's new Blu-ray of Four Frightened People presents the black-and-white, 1.37:1 standard film in a strong transfer, albeit with a lot of the shimmering, soft-focus style Paramount movies favored in the early- to mid-‘30s. The DTS-HD Master Audio (mono) is fine and optional English subtitles are offered on this region "A" encoded disc.

Supplements are limited to a good audio commentary track by critic Nick Pinkerton and a trailer, the latter in shockingly good condition considering its age.

Fast-paced and to the point, ridiculous throughout, especially in its early scenes, but compelling by the end, Four Frightened People is Recommended.