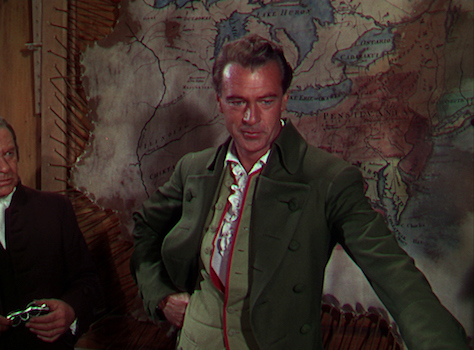 Unconquered (1947) is one of Cecil B. DeMille's epic takes on America's frontier past, much like the recently reissued Union Pacific. It's a romantic look at the colonial settlers' push west into Indian territory, with dashing and square-jawed Gary Cooper as the half-idealistic/half-sensible hero, Captain Holden. His nemesis is Garth, a shifty-eyed arms dealer played with villainous aplomb by Howard Da Silva. Garth is making moves and selling rifles to the Seneca -- not for the benefit of the indigenous people, but so he can be position himself as the white man with first dibs to steal land.

Garth's duplicitousness extends to romantic matters as well. Early in the film, Garth is creepily drawn to Abby, a female felon turned indentured slave played by former Charlie Chaplin muse Paulette Goddard. Holden sees Garth licking his lips over Abby, so he buys her and sets her free. Before the paperwork can be settled, Garth convinces the broker to burn up Holden's bill of sale (while pocketing the money, of course) and then draw up papers giving ownership of Abby to Garth's second-in-command. Garth can't own Abby himself because he has to keep up appearances with his wife, Hannah, the daughter of the Seneca chief with whom he is business partners. Hannah is played by director DeMille's adopted daughter, Katherine DeMille, and before you even ask -- yup, she's a white lady in unconvincing make-up.

There are a lot of operatic plot convolutions during this two-and-a-half-hour film, but the essential story is that Captain Holden has to go rogue both to thwart Garth's plans to set off a war between the colonial army and the indigenous tribes, and to rescue Abby from her unjust captivity.

It's a ripping adventure with genuine thrills and compelling romance. It's also racist, jingoist hogwash. One must understand that that's part and parcel of this sort of film from this era. Acknowledging the context certainly doesn't excuse the viewpoint, but I think it could help modern viewers manage their expectations.

The whole thing is a lavish cartoon, but it's been peopled with compelling presences throughout. Apart from our central love triangle, there is Ward Bond as Holden's old pal, Cecil Kellaway as an old rapscallion who helps Abby at various points in her journey, Victor Varconi as a charming military ally, and Boris Karloff -- in a problematic bit of casting that is still one hundred percent entertaining -- as the splendidly villainous Seneca chief Guyasuta.

As a pure romantic adventure, Unconquered mostly succeeds. Two and a half hours is a long time, and the film does drag a little bit around the 100-minute mark. DeMille rallies for a climactic showdown at Fort Pitt between settlers and Senecas that isn't quite the Battle of Helm's Deep but offers solid drama nonetheless. 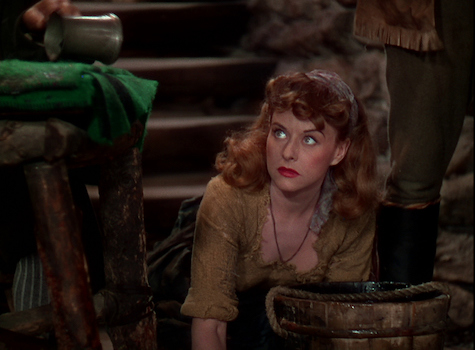 The Video:
While this AVC-encoded 1080p 1.37:1 presentation isn't sourced from a new Technicolor scan, it's boldly saturated and features good detail and depth. A few shots here and there look a little smeary, but it's a consistent transfer that satisfies overall.

The Audio:
No complaints from the DTS-HD MA 2.0 mono mix. Dialogue is clean and clear. Minor atmosphere and some action sound effects. The Victor Young musical score is well-handled. An English subtitles option is provided.

- With this and his commentary on von Sternberg's Thunderbolt, Pinkerton is quickly becoming a Kino commentary MVP. Lots of great info and analysis delivered smoothly and entertainingly.

Final Thoughts:
There is no doubt many modern viewers will blanch at Unconquered's treatment of its historical subject matter. It's inaccurate and distasteful, but that's kind of Hollywood's M.O. For viewers who can wade through the hokum, there's a fun romantic adventure in there. The star turns by Gary Cooper and Paulette Goddard are particularly appealing, while the surrounding character parts are mostly filled out with colorful and charming performances. Recommended. 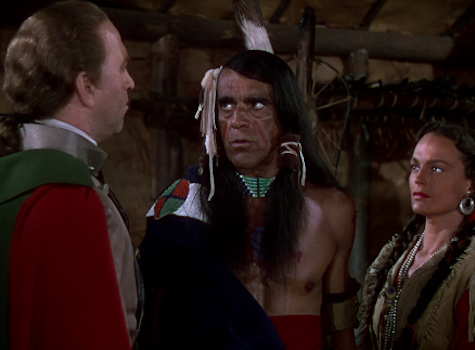