There seems to be no middle ground regarding the 1967 musical Thoroughly Modern Millie: viewers seem to either love it or hate it. Take a gander at the User Reviews of the film over at the IMDb: on a scale of 1 to 10, most of the reviews are either ecstatic 10s or emphatic 1s. Kino's new Blu-ray, a 4K restoration of the original roadshow version, puts the movie in the best possible light, though it's unlikely to change anyone's mind.

Starring Julie Andrews, Mary Tyler Moore, and Carol Channing, TMM has many fine qualities but also its share of problems, stemming chiefly from a weak and greatly protracted second-half, including much superfluous, unfunny slapstick. The campy tone is inconsistent, at times even contradictory. Andrews and Channing, however, are delightful, the film looks great and the songs are fun. 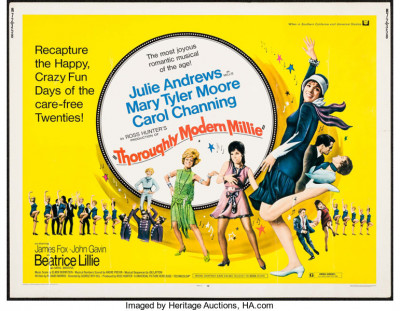 Thoroughly Modern Millie is a pastiche of obvious musical theater influences. Producer Ross Hunter wanted to adapt the 1953 musical The Boy Friend but couldn't get the rights (too expensive), so he made TMM instead, which is essentially a reworking of The Boy Friend's core elements and Roaring Twenties setting. Further, Hunter's production stars Julie Andrews, who first gained famed as the then-unknown star of the 1954 Broadway version of The Boy Friend, so her performance here is a pretty good approximation of her character from that hit. Carol Channing, meanwhile, plays a character an awful lot like Dolly Levi, her signature role from the 1964 musical Hello, Dolly!. If that weren't enough, one amusing scene has Andrews's Millie performing at a traditional Jewish wedding, one not far removed from the Act I climax of Fiddler on the Roof, which premiered on Broadway in 1964. Surprisingly, the filmmakers didn't find room for a song or two inspired by A Funny Thing Happened on the Way to the Forum.

In 1922 Manhattan, Millie Dillmount (Andrews) is a would-be flapper determined to land a rich husband. She lives in the women-only Pricilla Hotel, Millie unaware that house mother Mrs. Meers (Beatrice Lillie) and her Chinese laundrymen (Jack Soo and Pat Morita) are kidnapping and selling select tenants into white slavery. As the film opens they set their sights on the latest check-in, pretty Dorothy Brown (Moore), a hopelessly naïve aspiring actress.

Millie, meanwhile, meets and is attracted to carefree paper clip salesman Jimmy Smith (James Fox) but sets her marital sites on company president Trevor Graydon (John Gavin). As Mrs. Meers repeatedly but unsuccessfully tries to kidnap her newest arrival, Millie, Dorothy, and Jimmy head to the Long Island mansion of fabulously wealthy free-spirit Muzzy Van Hossmere (Channing). Inspired by Muzzy's carpe diem approach to life and her advice to marry for love, Millie finds herself increasingly conflicted at having to choose between Jimmy and Trevor.

Thoroughly Modern Millie was made at Universal, a studio hardly famed for its musicals. Indeed, the company hadn't produced one since Flower Drum Song in 1961 and not on a regular basis since the days of Deanna Durbin. Yet, while the picture retains Universal's rather bland house style as it existed in the mid-‘60s, TMM looks great, the $6 million production, shot mostly on the backlot, boasts excellent production design credited to Alexander Golitzen and George C. Webb, evocative period costumes by Jean Louis, and crisp cinematography by Russell Metty (aided by Russell Harlan when the former fell ill). Partly recycling elements of The Boy Friend, the film teeters precariously in the direction of terminal cuteness, with Millie breaking the fourth wall and addressing the camera via silent movie-type intertitles, and generally opts for a kind of camp approach rooted in carefree pre-Depression era lifestyles and the basic innocence of Millie and especially Dorothy.

This approach doesn't really work. A charming opening number has Millie shedding her long curls and traditional, early 20th century wardrobe for a hair bob, pearls, and flapper apparel, in lyrics and dialogue claiming to be a kind of liberated woman taking charge of her own life yet, contradictorily, determined to marry into money. The business of the white slavery ring is a clever subplot entirely in keeping with 1920s concerns (one scene is straight out of a Fu Manchu thriller) but it's not effectively realized in the movie. Generally though, George Roy Hill's direction, despite his relative inexperience in the genre, is imaginative without being intrusive.

Some consider this a parody of 1920s silent cinema, but other than a shoehorned Harold Lloyd tribute (?) that falls on its face, the film is more in line with the ‘50s/'60s vogue for movies gently satirizing technological innovations, styles, and social mores of the 19th and early 20th centuries. Sometimes these pictures can be awfully smug, but TMM seems to have a real affection for this period.

The mix of period and original songs works, with the title song especially sporting clever lyrics by Sammy Cahn. The playful titles are appealing, including an amusingly conceived intermission break.

With TMM, Andrews neatly breaks free of her Mary Poppins/Maria von Trapp wholesomeness while losing none of her innate appeal. She has great comic timing and her singing is peerless. Reportedly the film was originally conceived on a much smaller scale, with at least equal time planned for Mary Tyler Moore's character. Once Julie Andrews, the top box-office star in the world at the time (due to the colossal success of The Sound of Music), the movie was retooled in her favor, and as a roadshow attraction like the Rogers & Hammerstein film still in theaters. This retooling, however, damages the end results in various ways.

For one thing, Mary Tyler Moore does not come off well at all. The actress made the unwise decision to affect a squeaky, little girl-type voice so far removed from Laura Petrie she almost sounds dubbed. (She's not, but it's hard to find Moore's normal speaking voice buried deep in there.) Where Andrews gives a nuanced, relaxed performance of impressive comic precision, Moore is like a deer in the headlights, with an unnatural smile usually frozen on her face.

Moore seems all the weaker when, well into the film, Carol Channing's Dolly-like Muzzy bursts onto the scene. Channing's unrestrained ebullience overwhelms the picture in the good sense, her bigger-than-life showstopper number, the standard "Jazz Baby" winning over not only Millie and Dorothy but the movie audience as well.

Thoroughly Modern Millie is presented by Kino via a new 4K restoration. The 1.85:1 widescreen film looks bright and colorful, its 151:56 running time including the film's overture, intermission break, entr'acte, and exit music. The overture seems to be monophonic, but the rest of the film, at least the music tracks, are in full stereo, here in DTS-HD Master Audio (2.0). Optional English subtitles are provided on this region "A" encoded disc.

Supplements are limited to two versions of essentially the same trailer (one in 1.85:1 widescreen, restored in 2K, the other an older 1.37:1 standard version) and a new audio commentary track by Lee Gambin and Ian McAnally.

Your mileage may vary, but I found Kino's Blu-ray of Thoroughly Modern Millie definitely worthwhile, though I'm more likely to revisit select moments than watch it all the way through again anytime soon. Highly Recommended.