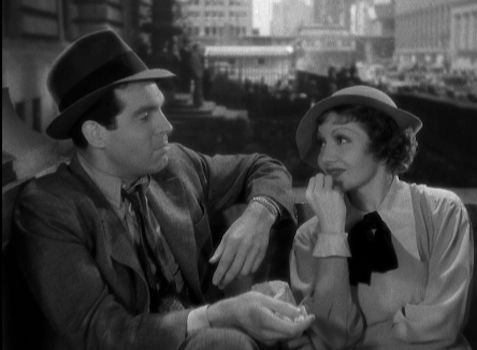 The Gilded Lily (1935) was the first of seven films that paired Claudette Colbert with Fred MacMurray. Like The Bride Comes Home, the second Colbert-MacMurray vehicle (which Kino Lorber also released on Blu-ray in July), this comic romance is centered on an odd love triangle with Fred MacMurray as a hot-headed newspaperman. Both films share a director and a screenwriter (Wesley Ruggles and Claude Binyon, respectively), but The Gilded Lily feels a little fresher and stranger.

Colbert plays sweet-natured stenographer Marilyn David, who is best pals with MacMurray's celebrity beat reporter Peter Dawes. Peter is clearly in love with Marilyn, but she doesn't feel the same. She enjoys his company at a weekly date where they sit on the same bench and people-watch while eating popcorn, but her heart yearns for big romance. Soon, big romance arrives in the form of Charles Gray (Ray Milland), a charming, jobless Englishman who takes Marilyn out for a whirlwind weekend, but then has to leave town briefly.

Anyone who has watched a Lifetime or Netflix romance movie in the past decade knows what's coming next. It turns out Charles Gray is actually royalty -- or maybe nobility? He's the son of a duke who has to call off a wedding engagement back home before he can marry his new American sweetheart. When his identity and stateside fling comes to light -- thanks to Peter's paper -- there is major scandal, and more importantly, Marilyn feels terribly hurt and duped.

In a bizarre turn, Peter takes this opportunity to turn his pal and would-be paramour into a tabloid celebrity. He even contrives a nightclub act for Marilyn, unconcerned that she has no musical or dancing talent. Eventually she becomes enough of an international star in her own right that Charles Gray comes calling again, and they give it another try -- much to Peter's annoyance.

Pardon the anachronistic reference, but The Gilded Lily has a Pretty in Pink problem. The storytelling and dialogue are quite fun. The whole thing feels effervescent and clever. But the two men our heroine is supposed to choose between both come up short. Charles Gray is designed to be a Prince Charming who can't live up to the hype, while Peter Dawes is supposed to be the swell regular guy that has been right under Marilyn's nose the whole time. The problem is that, like Duckie in the John Hughes movie, Peter is a self-involved jerk who manipulates Marilyn and then pouts when he doesn't get his way. Worse than that, he turns Marilyn into a meal ticket, seemingly out of spite. How am I supposed to root for him, or side with Marilyn when she decides he must be the one?

That said, The Gilded Lily is propelled by Claudette Colbert's charm and star power, which makes it hard to resist, flaws and all. And actually, despite the questionable traits of their characters, MacMurray and Milland are compelling competitors here too. This is a film where the scene-by-scene small picture leaves a greater impression than the overall big picture. The fumbling comedy and unexpected grace of Marilyn's first nightclub performance sticks with this viewer more than the clunky plot mechanics. Maybe the same will hold true for you. 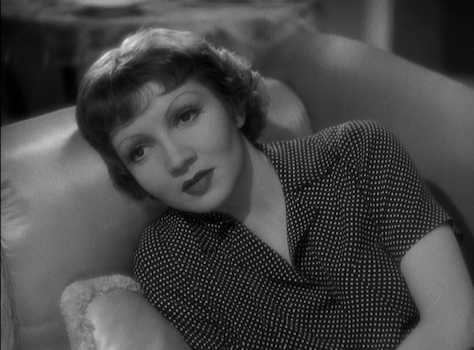 The Video:
Like The Bride Comes Home, this AVC-encoded 1080p 1.37:1 presentation seems to derive from an old scan with no restoration. There are minor tears, some dirt, and other speckling. Still, this is a slightly better image than that film overall. Decent detail and strong blacks, with a pretty good range of shadow detail.

The Audio:
The DTS-HD MA 2.0 mono audio mix is pretty clear and clean, with a decent bit of low-end and occasional crispiness on the high end (the track never totally overmodulates). The English subtitles are pretty good, although a few incorrect soundalike words snuck in there.

- A great mix of history, biography, and analysis. Diabolique writer Ellinger speaks conversationally (and with a disarming working-class accent), which makes this an engaging track to sit with.

Final Thoughts:
The Gilded Lily is a fun watch, thanks to many odd touches, snappy quips, and charming turns by the three leads. It's somewhat undone by the formulaic plotting, but there's plenty to like besides. Recommended. 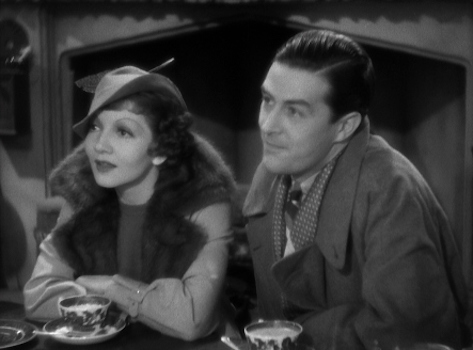