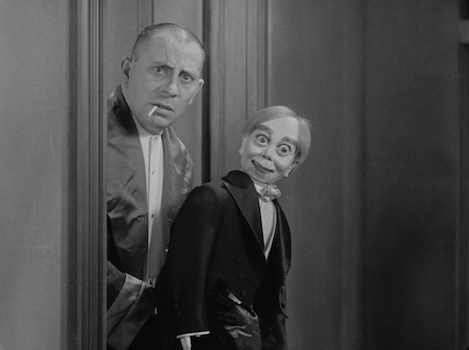 Erich von Stroheim plays the title character in 1929's The Great Gabbo, the godfather of mad ventriloquist films. While not as chilling or blatantly horrific as Dead of Night or Magic, Gabbo is certainly one of the oddest early sound films this reviewer has come across.

Essentially a backstage melodrama with a boatload of on-stage musical production numbers, the film tracks the hot and cold relationship between von Stroheim's ventriloquist Gabbo and Betty Compson's Mary, a singer and dancer whose potential is stifled by Gabbo's megalomania. At the start of the picture, they are stuck doing two-bit vaudeville shows in New Jersey, but Gabbo is certain he will become the toast of Broadway.

Both Gabbo and Mary talk to Gabbo's ventriloquist dummy, Otto, as if he were alive. One gets the feeling that Mary prefers Otto because Gabbo actually expresses his hidden tenderness and warmth when throwing his voice through the dummy's wooden lips. Even though Otto is treated like a separate character -- he is voiced by another actor, George Grandee, too -- this is not a story about a doll that becomes sentient. Sure, the doll looks like a melted Peter Lorre, but the villain of this piece is Gabbo all the way. von Stroheim plays the character with the perfect mixture of severity, cruelty, self-satisfaction, and -- just occasionally -- surprising vulnerability. Still, we can't help but cheer for Mary when she initially ditches the abusive Gabbo.

The second half of the film takes place literally backstage, behind the scenes of a Broadway revue where Gabbo has indeed become the star attraction and Mary has become a featured performer. With his new success, Gabbo thinks he can win Mary back. For Mary's part, she seems like she might be convinced. However, Mary's new fella Frank (Don Douglas) doesn't like Gabbo's romantic schemes one bit.

The Great Gabbo is thoroughly a product of its time. This is both what makes it fascinating and often tiresome. Dialogue scenes are staged pretty flatly, and most of them go on far too long. The half-dozen musical numbers -- though they are clearly designed as empty spectacle to pad out the film -- do a lot to perk up The Great Gabbo as it goes. The musical numbers were originally shot simultaneously in black-and-white and an early two-color process called Multicolor; sadly, none of the Multicolor footage has survived.

This isn't to say the song-and-dance stuff is all stellar. The big numbers tend to thrive more on the manic energy of their well-meaning chorus boys and girls rather than those folks' actual talent and precision. Quirky flapper gal Marjorie Kane sings a few nice tunes, and a number designed around a giant spider web is a memorable eye-grabber.

Some of the late scenes between von Stroheim and Compson are nicely underplayed and quite affecting, injecting this silly little melodrama with an unexpected jolt of real human feelings. Things naturally can't turn out well for Gabbo and Mary as a couple, and von Stroheim gets some wonderfully big meltdown moments at the very end.

The Great Gabbo is a little lumpy and slow to be a straightforward crowdpleaser, but it is worth checking out as a historical curio -- and as a showcase for Erich von Stroheim's antiheroic performance. 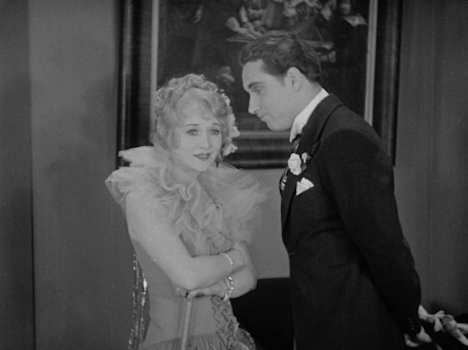 The Video:
Sourced from a new restoration by the Library of Congress, this AVC-encoded 1080p 1.33:1 presentation mostly features excellent detail and depth. There are varying levels of damage, degradation, and inconsistent image density throughout, but one presumes this is the best version of this more than 90-year-old film that could be assembled with the available materials. Generally, the film damage is light and doesn't interfere. As stated in the main review, sadly none of the two-color versions of the musical numbers exist anymore.

The Audio:
The DTS-HD MA 2.0 mono soundtrack is satisfactory, considering the age of the film. Dialogue is mostly understandable, despite frequent surface noise and hiss. Occasionally, the musical numbers come off a bit too trebly, with particularly crispy high end, but nothing wildly unexpected from such an early sound film. An English SDH option is provided.

- Historian Barrios is an expert on early movie musicals, and this discussion is jam-packed with historical context and biographical information.

Final Thoughts:
There are many entertaining -- and wildly unusual -- moments scattered throughout The Great Gabbo. Early talkie enthusiasts will be more keen to check this out than the average viewer, but for the curious and the adventurous, this comes Recommended. 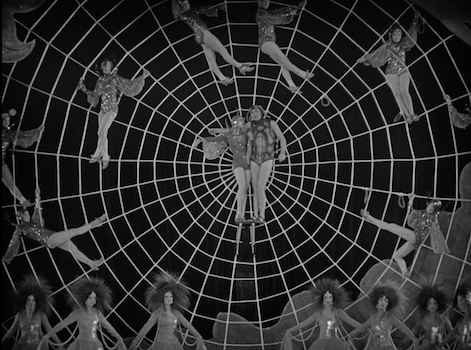