Star Trek: Discovery is an immensely frustrating show. The basic components for a fine addition to the Star Trek universe are all there, yet every episode leaves me exasperated and exhausted. The acting is mostly good, a number of characters have potential, some of its big ideas and little details are clever and interesting, and, of course, its production values and special effects are at a level undreamed-of back in the ‘60s during the run of the first series. (Two Discovery episodes costing about as much as the entire, 79-episode run of the original Star Trek.)

And yet, watching an hour-long episode of Discovery I feel like I'm averaging about five minutes of genuine Star Trek-dom. The rest is something else, high-concept sound and fury signifying nothing.

As a fan of Star Trek for nearly half a century, I can't really fault Discovery for not appealing to my aging demographic, for it shooting for a broader, undoubtedly younger and less discriminating audience. But why waste all that time, money, and energy on TV with all the nutritional value of pork rinds? 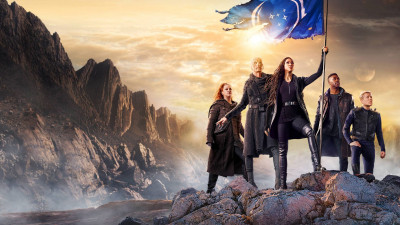 Star Trek: Discovery is set a decade or so prior to the Original Series, i.e., the Captain Pike years, he in fact reimagined as taking command of the U.S.S. Discovery during season two before landing his own spin-off. Yet, unlike captain-centric previous shows, Discovery's main character is Michael Burnham (Sonequa Martin-Green) who, despite the name, is a female science specialist. Also aboard is Saru, an impossibly tall and thin "Kelpien," played by impossibly tall and thin Doug Jones, his wiriness accentuated by platform shoes; Chief Engineer Paul Stamets (Anthony Rapp), the first openly-gay regular character in the Star Trek Universe; and Starfleet Academy cadet Sylvia Tilly (Mary Wiseman), who works in engineering. Myriad others linger mostly in the background.

Discovery's Byzantine, season-long story arcs have thus far resulted in each season being completely unlike the ones to follow it. This one kicks off with Michael and the Discovery crew separated as they fling themselves into the far future of 3188 A.D., ostensibly to protect information from an artificial intelligence bent on destroying the universe back in the 23rd century. Michael crashes into a cargo ship belonging to "Book" (David Ajala), a Lando Calrissian-type smuggler, the two eventually becoming quite close during the year it takes the Discovery to find her.

In this 30th century, the Federation is virtually kaput. A universe-wide, catastrophic event known as the "Burn" inexplicably caused all of its dilithium crystals (the life blood of starships) to become unstable at the exact same moment, resulting in nearly the entire Federation fleet to explode simultaneously. No longer governed by the United Federation of Planets, species throughout the galaxy are isolationist or predatory, so Michael and the Discovery crew take it upon themselves to restore the last remnants of the Federation and, by extension, freedom to the galaxy.

Dominating my frustrations with Star Trek: Discovery is its relentless, huge-scale action. Heavily influenced by the even worse J.J. Abrams Star Trek movies, Discovery operates like a runaway train: spaceships flying in every direction, dodging thousands of asteroids, H-bomb-sized explosions in every direction, smoke and sparks and console parts flying all over the bridge, spatial relationships impossible to discern amid all the shaky hand-held camerawork and breakneck editing. A series like Star Trek: The Next Generation was, largely, contemplative: the crew of the Enterprise are faced with a problem or crisis they don't understand, and spend most of the episode trying to figure things out while trying to avoid even bigger problems. By contrast, in Discovery the shit's always hitting the fan, the fate of the universe is always at stake and there's never any time to stop and smell the roses.

When Michael first lands on an unknown planet far in the future, within minutes she gets into martial arts-style combat with another character and, soon after that, gets swallowed by a giant worm-like creature. Kirk and Spock would have, at least, taken a moment to admire the scenery. Here, dialogue is dominated by those two high-concept constants: cynicism and witty banter, often peppered with anachronistic jargon Trek's earlier producers would surely have tossed.

(A key third-season line, "I landed here a year ago," is one example. Earlier show runners like Bob Justman would have questioned this. "How long is a year on this planet? 365 earth days? 37?")

During the original run of Next Generation, it became something of a joke how boy-genius Wesley Crusher would sometimes provide the deus ex machina to get the Enterprise crew out of trouble, using technobabble about retooling some conduit to get the engines back on-line. On Next Generation though, this cheat would be used sparingly, and usually a minute or two out of an often pretty solid hour episode. In Discovery, this technobabble, typically coupled with impenetrable metaphysical-babble, completely drives most of Discovery's scripts. Often, I'd find myself having no idea what's happening within an episode or, equally important, why it's happening. Or, for that matter and perhaps most importantly: why should I care?

Despite this, the Discovery crew is unaccountably quite emotional, frequently shedding tears and unashamedly expressing deep emotion for one another, completely unearned sentiment because Discovery's characters are always too busy putting out fires to have more than 30 seconds of an intimate conversation amongst themselves. No one seems to know how to relax: in a rare moment of downtime Michael practices her martial arts skills with a hologram. The science officer. Aboard a science vessel. Always preparing for hand-to-hand combat which, admittedly, is pretty damn frequent.

The original Star Trek series set precedents for inclusive casting, but Discovery goes completely off the rails in this regard, ultimately coming off as shameless, P.C. pandering. It's as if the show's twenty -- 20! -- producers were working from a checklist. African-American female lead? Check. Gay male engineer? Check. Non-binary teenage genius? Wise-cracking lesbian? Check, Check. Transgender characters? Check. There's even a "fat girl," stereotypically bubbly and affable yet prone to depression and uncertainty. I'm all for inclusiveness, but the inclusivity almost never actually enriches these characters; it's just window dressing, and rarely figures into Discovery's overwrought plots.

Ironically, earlier series like Next Generation and Deep Space Nine devoted entire episodes to gender and racial issues all the time, if couched in its sci-fi setting, the 1992 Next Generation episode "The Outcast" being an obvious, though quite daring-for-its-time example.

Earlier incarnations of Star Trek presented an optimistic future well on its way to a kind of pro-science utopian universe free of want and largely bereft of racial and religious conflict, a universe to strive toward while the real 20th century world struggled with all kinds of problems. But Discovery presents a Star Trek universe that I, for one, wouldn't want to inhabit, more so in the dystopian universe Season Three presents. It tosses a bone of inclusivity while ignoring the kinds of issues Star Trek was tailor-made to grapple with. Where are the episodes dealing with climate change, unrestrained capitalism, religious intolerance, etc.? Not here.

CBS/Paramount's Star Trek: Discovery - Season Three is perfectly adequate on Blu-ray, its widescreen image of about 2:00:1 looking great on my 10-foot-wide screen/projection system. Likewise, the DTS-HD Master Audio 5.1 (lossless) audio is up to contemporary standards, with a Dolby Digital 5.1 French track also included, as well as subtitle options in those languages.

Despite much early promise, Star Trek Discovery is quickly losing ground as fast as this reviewer is losing patience for the show. It's failings aren't going away, and watching it continues to be a frustrating, and ultimately unrewarding experience.