Rififi in Paris (aka The Upper Hand)

In the world of French crime films, Rififi in Paris (U.S. title: The Upper Hand; Du rififi à Paname, 1966) is decidedly minor, yet most entertaining, fascinating even, for reasons other than its clumsy, derivative plot. The picture stars the great Jean Gabin, who over a five-decade career starred in more classics of French cinema than probably anyone else, including some of its best crime thrillers, plays his familiar stony-faced screen persona -- but this time inhabiting what amounts to an imitation James Bond movie.

Globetrotting and featuring an international cast, including George Raft and Gert "Goldfinger" Fröbe, Rififi in Paris is immensely entertaining despite its shortcomings. 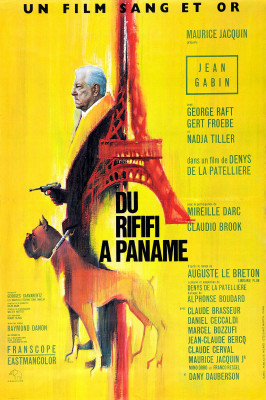 Paul "Paulo the Gem" Berger (Gabin) is a gangster operating a smuggling ring in partnership with stateless German Walter (Fröbe). He snares "mules" in need of fast cash to support the women like Lili (Mireille Darc) who seduce them at Paulo's nightclub (similar to Japan's "snack bars"). One such smitten man, Mike Coppolano (Claudio Brook), a Chicago newspaperman whose wallet can't keep pace with Lili's demands for expensive jewelry, is coaxed into smuggling small bars of gold to Tokyo.

But Mike is soon revealed to be a U.S. Treasury agent investigating the smuggling ring. Further, a syndicate led by New York mobster Charles Binnaggio (Raft) wants to muscle in on Paulo and Walter's turf, systematically bumping off their confederates as a warning. When one of Binnaggio's assassins takes a shot at Paulo, Mike saves his life and, in the tried-and-true fashion of such crime films, immediately becomes Paulo's lieutenant, serving with longtime righthand man Marque (Marcel Bozzuffi).

Director and co-writer Denys de La Patellière (of the similarly derivative but entertaining Taxi for Tobruk) fuses classic French crime thriller tropes with elements from the emerging 007 phenomenon. The globetrotting subplots, filmed on location in Tokyo, London, and Munich are one component, Georges Garvarentz's blatantly John Barry-esque musical score another. (His main title music is original and appealingly jazzy, but the rest of the film is faux-Bond all the way.) The Franscope cinematography by Walter Wottitz (The Train, Army of Shadows) is superb, really bright and colorful, exactly what the film requires, but La Patellière's direction of this footage is choppy. His transitions from one scene to the next are particularly clumsy.

But the film is entertaining nonetheless. Like the age-defying Clint Eastwood of more recent years, white-haired Gabin, fat and in his 60s but looking older, still has beautiful young ladies swooning over him (believably!) and in one early scene slaps down a punk half his age looking for a shakedown. Likewise, George Raft plays the George Raft movie gangster, even flipping a coin near the end, just as he did in his star-making role in Scarface and virtually every movie appearance from the mid-1950s until his death in 1980. Genre clichés may run amuck, but it's a kick just to see Gabin and Raft in the same room together.

Raft's distinctive voice is heard throughout, as his character speaks entirely in English. Conversely, Fröbe is obviously dubbed into French by another actor, save for one short scene in German with Austrian actress Nadja Tiller playing Irène, his lover and Paulo's former mistress. That one scene features outstanding, even unnerving acting by Fröbe but his big, serious scene is wildly out of place in such a trifle.

The location scenes, including those in long-gone '60s Paris, fascinate. Footage in Tokyo lingers on areas and from angles not often found in contemporary Japanese films. There's even a shot of the Nishigeki Theater showing Thunderball, while the London footage includes an incredible shot of the Victoria Palace Theatre during the run of the controversial The Black & White Minstrel Show, a theatrical (and TV) series embarrassed Brits would like the rest of the world to forget yet, incredibly, it lasted in some form until 1989.

Mexican actor Claudio Brook, whose eclectic credits include Buñuel's The Milky Way and the outlandish The Devil's Rain (1975), doesn't have much screen presence; forget his scenes with Gabin, he's a lightweight even next to Bozzuffi, immortalized as the hitman chased by Gene Hackman in The French Connection. However, in supporting parts Mireille Darc and especially Nadja Tiller are very good, though it's really Gabin, Fröbe, and Raft that light up the screen.

Licensed from StudioCanal, Rififi in Paris is presented in an excellent transfer preserving the original Franscope (2.35:1) aspect ratio. The image as a couple of very minor flaws but mostly looks great: impressively sharp with excellent color. (My lone complaint is the menu screen, which contains a major spoiler. Couldn't Kino have chosen something else?) The DTS-HD Master Audio (mono) is fine and the optional English subtitles are excellent. Region "A" encoded.

A very enjoyable genre fusing of classic French crime thrillers with the emerging spy craze of the mid-1960s, Rififi in Paris is far from great but I still had a heck of a good time watching it. Highly Recommended.