Guyana: Cult of the Damned

Falling into a category that might be called "exploitation drama," Guyana: Cult of the Damned (aka Guyana: Crime of the Century, 1979) was the second such work by Mexican filmmaker René Cardona, Jr., whose earlier Survive! (Supervivientes de los Andes - Andes Survivors, 1976) dramatized the disturbing story of passengers and crew aboard doomed Uruguayan Air Force Flight 571, which crashed into mountains so remote survivors resorted to cannibalism of the deceased until they were eventually belatedly rescued.

The bigger-budgeted Guyana: Cult of the Damned explores the 1978 Jonestown Massacre, in which 918 people, most members of Jim Jones's religious cult, were murdered or compelled to commit "revolutionary suicide." It was the first dramatization of the tragedy, though not released in the U.S. until January 1980, three months prior to Guyana Tragedy: The Story of Jim Jones, a more "reputable" CBS television miniseries starring Powers Boothe as Jones.

Reviews in the American press of Cardona's film were scathing, while reviews for the miniseries were generally positive and it was nominated for multiple Emmy awards. I haven't seen the TV version since it originally aired, but Cardona's film is neither as bad nor as exploitive as its reputation suggests. Like Survive!, unseen by this reviewer in many years, Guyana: Cult of the Damned is not gratuitous. Rather, both films dramatize their tragedies in a straightforward manner that rarely strays from historic fact. Cardona lets the events themselves convey the horror of what happened. There's brief nudity and a little blood but nothing so graphic that would justify its "R" MPAA rating. Rather, it's the true unfolding of events that's so unsettling.

This is not to say either Survive! or Guyana are good, but they are, undeniably, compelling. 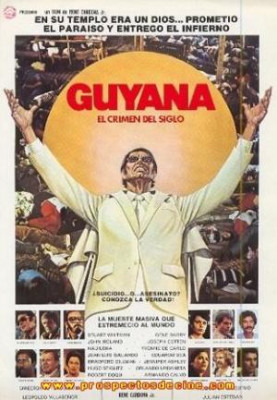 There are, apparently, at least three different cuts of the film, the Blu-ray offering the U.S. version released by Universal and running 90 minutes, the shortest of the three running times. (Incredibly, immediately following news footage of the aftermath, hundreds of bloated, rotting corpses, Universal's cut segues to its familiar "When in Hollywood, Visit Universal Studios!" advertisement.) A longer version previously released to DVD, possibly a U.K. release, runs 108 minutes, while the original edit in Mexico ran 115 minutes. This Blu-ray version is narrated by an uncredited actor playing a male survivor, but this apparently exists only in the short version and feels tacked-on: this character is never depicted onscreen.

The film changes the names of the key players but what happens follows the Jonestown events very accurately. Here, Rev. Jim Johnson (Stuart Whitman) heads a socialist-leaning Christian Church in San Francisco. Initially, his fiery sermons seem pretty normal, even admirable, Jones invoking the non-violent actions of Robert Kennedy and Martin Luther King, Jr., among others, and disparaging the country's racism, crime rates and rampant drug use, though Jones/Johnson himself was addicted to various drugs.

Increasingly paranoid, he convinces his flock to surrender to him all their worldly possessions so that the 1,200-strong congregation can move en masse to a utopia in the jungles of Guyana, "Johnsontown." However, the situation there quickly deteriorates with not enough food to go around, squalid living conditions for all but Johnson and his lieutenants, and Johnson himself becoming increasingly unpredictable and exerting a god-like mind control over his followers.

Soon, California Congressman Lee O'Brien (Gene Barry, the character based on Leo Ryan), hearing reports of concentration camp-like conditions and members (including children) held against their will, forms a party composed largely of members of the press to investigate. O'Brien's visit, however, only convinces Johnson that his fiefdom will soon collapse, and he orders the "revolutionary suicide" of all his members.

Cardona seems content to let the real-life story dominate at the expense of characterization, at no point ever even attempting to get inside the head of Johnson or offer some kind of explanation as to how his followers could be so mesmerized by his personality that they would completely surrender their lives to him, even to the point of forcing lethal fruit-flavored cocktails into the mouths of their children and themselves.

But the simple chronicling of events is plenty compelling all by itself, and the film admirably recreates the environment of "Johnsontown" vividly, especially for those old enough to remember news photographs of its aftermath: endless bloated corpses side-by-side at the compound, and bloody bodies chaotically strewn on an airport tarmac nearby.

Curiously, the film's name cast is almost irrelevant. Only Stuart Whitman, Gene Barry, and the never-seen narrator have significant dialogue. Bradford Dillman, for instance, playing Johnson's personal physician, who made the cyanide-laced drinks, is onscreen often but probably speaks less than 10 lines in the entire film, at least in this shortened version. Familiar actor Robert DoQui is likewise onscreen a lot but has no lines at all. John Ireland and Joseph Cotten, the latter giving special billing, play Johnson's lawyers but appear only briefly in the film's last-third.

Whitman, with the lion's share of dialogue, is quite good at portraying Jones/Johnson's gradual cognitive decline, though in early scenes he's less successful conveying the character's charisma and ability to get people to trust him so emphatically.

Featuring a new 2K video transfer, Guyana: Cult of the Damned includes Universal's cut and their opening/closing credits. The image is less than pristine but not bad at all, with decent sharpness and color. The DTS-HD Master Audio (mono) is likewise okay. Region "A" encoded.

Supplements are limited to an isolated score and effects track, and a trailer.

Though far from great, Guyana: Cult of the Damned isn't nearly as trashy as one might expect, and in accurately recreating the tragic events it dramatizes, remains compelling to this day. Recommended.