One of the strangest features ever produced by a major Hollywood film company, Skullduggery (1970) was for decades nearly impossible to see. I'd been intrigued by a couple of photos of its peculiar, hairy ape-like creatures in books about sci-fi and horror films published in the ‘70s, but it rarely turned up on television, and then almost always in the middle of the night (for good reason, as it turned out).

The movie all too clearly was prompted by the blockbuster success of Planet of the Apes (1968) and, like that film, Skullduggery was adapted from a French novel, in this case a 1952 work by Jean Bruller called Les animaux dénaturés. Also like Planet of the Apes, Skullduggery mixes science fiction with satire and social commentary. Producer Saul David had made Fantastic Voyage (1966), 20th Century-Fox's big sci-fi hit immediately prior to Apes, but studio-hopper David instead sold Skullduggery to Universal, then in the midst of trying to class-up their film division. 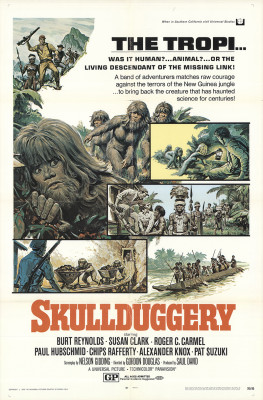 The first half of the movie unfolds reasonably well, stylistically resembling the better Tarzan movies of the early- and mid-‘60s. In present-day New Guinea, roguish adventure Douglas Temple (Burt Reynolds) and his drunken associate, Otto Kreps (Roger C. Carmel), worm their way into an archeological expedition headed by Dr. Sybil Graeme (Susan Clark, under contract to Universal during this time and affecting a slight British accent) with Catholic missionary Father "Pop" Dillingham (Chips Rafferty) along for the ride. Temple and Kreps are secretly hoping to stake claim on a rich deposit of phosphorous (used in every color television set in the world, Kreps says repeatedly). The party runs afoul of various natives, and Temple and Graeme have a clichéd love-hate relationship that includes casual sex.

Eventually, deep in the largely unexplored jungle, they stumble upon a man-ape tribe of living missing links, which Temple nicknames Tropis. Innocent but intelligent, the Tropis cautiously befriend the human explorers. Temple and Kreps get their phosphorus mine, but the financier of the expedition, Vancruysen (Paul Hubschmid), intends to breed the Tropis for slave labor, indirectly prompting a criminal trial to determine definitively whether the Tropis are human and thus entitled to human rights or animals no different than domesticated beasts of burden.

It's immediately clear why Skullduggery didn't air much on commercial television, and why the title has been so elusive on home video. For the long journey upriver, the expedition engages dozens of bare-breasted female natives to paddle their canoes, while the female Tropis, being essentially naked, have visible if hairy breasts with exposed nipples. But what really sends Skullduggery off the rails is its wild turn into unequivocal bestiality: (spoilers) Kreps impregnates one of the Tropis, Topazia (Pat Suzuki), whom Temple smuggles to a motel where she miscarries, though Temple claims to have murdered the stillborn baby in order to force the precedent-setting trial regarding the Tropis's legal status.

Interestingly, the Blu-ray bears an MPAA rating of "M" ("suggested for mature audiences") after the end credits, but around the time the picture was released this rating had been dropped in favor of "GP," which is on the posters and for which audiences of all ages were admitted, albeit with suggested parental guidance. During those crazy early days of the ratings system, all kinds of sex and violence was tolerated, but for its tacit approval of bestiality alone the film today would surely rate no less than an "R," possibly even an "NC-17."

The basic story could make a fascinating film, but its makers are clearly out of their depth. It might have succeeded as a straight adult drama or as a wild, anything-goes social satire, but Nelson Gidding's neither fish-nor-fowl screenplay tries for both simultaneously and the results are, well, mighty peculiar. During the trek in the jungle, Temple pressures their native guide to venture into taboo territory and, one foot into this forbidden land, the guide is instantly arrowed, falling hundreds of feet off a cliff to his death. The white men (and woman) simply shrug and turn around. When Temple and Kreps launch their phosphorus mine, they dress the Tropis in bright pink overalls and rig a contraption like something out of an Irwin Allen TV show to dispense cans of Spam (though officially "Old Kentucky Ham" in the movie), the favorite snack of Tropis, for each loaded minecar. During the trial a Black Panther type (Booker Bradshaw) storms into the courtroom, disrupting things by insisting the Tropis are clearly fair-skinned and therefore, by extension, whites are inferior to blacks, or something, a weird digression that plays like bad Otto Preminger, who at one point was attached to the production. (The argument is meaningless anyway, as the Tropis are clearly played by Asian, not white actors.) At times the film seems to think itself profound, yet in the jungle Susan Clark's Edith Head wardrobe is like something Barbara Stanwyck might wear in some early ‘30s soundstage jungle melodrama.

One suspects the location scenes dominating the first half of the movie were shot first, while the interiors prominent in the second half (the motel room, the courtroom, etc.) were done later, and that, possibly, during the interim, the studio lost faith in the project. The early jungle scenes are lavishly produced, and given ‘60s Tarzan-like flourishes such as the use of split screens, lap dissolves, freeze-frames and the like. The interiors-dominated second half of the story by comparison feels rushed to the point of complete ineptitude. The key scene in the story, with Temple and Kreps hiding out in the motel while Topzia gives birth, is so horribly staged it's almost appalling, as if no one involved wanted anything to do with it beyond getting it done as effortlessly as possible. Further, the entire last 40 minutes of the picture jarringly jerks from one scene to the next; one minute the Tropis are being studied by Clark's party, then suddenly we're in the middle of a huge complex apparently designed for Tropis slave-breeding. Then, just as abruptly, we're thrown into that motel room and, soon after, the circus-like courtroom.

The film's tone changes at random. Kreps's relationship with Topazia initially seems rooted in genuine mutual affection, approaching a sweetness again to the human-ape relationships in several of the Apes films, but the character's grotesque appearance and alcoholism seems designed solely to offset any possibility of inter-species love or deliberate sexual intercourse. Near the end, Kreps insists, "I was drunk!" like a fraternity brother caught with a homely girl.

The makeup of the Tropis consists primarily of hair, lots and lots of hair, hair everywhere, in contrast to the subtle latex facial appliances used in Planet of the Apes. Pat Suzuki's Topazia inexplicably wears false eyelashes, but her sweet performance rises well above the material. Indeed, all of the diminutive actors playing Tropis (reportedly, mimes) work hard to suggest man-ape behavior, and the sound effects of their chirping-filled speech is believable.

Licensed from Universal, Kino's Blu-ray of Skullduggery is a 2K remaster. Universal at the time favored shooting features in 2-perf Techniscope but Skullduggery was filmed in anamorphic Panavision, and the wide screen cinematography is one of the film's best features, at least during the first-half/jungle exploration scenes, the scenery augmented by several nearly imperceptible matte paintings by Albert Whitlock. The DTS-HD Master Audio (mono) is fine for what it is. Optional English subtitles are provided on this region "A" encoded disc.

Undeniably jaw-dropping in many respects, Skullduggery fascinates but mostly for the wrong reasons. It's so unusual if wrong-headed that it's definitely worth seeing once but likely never again, so a Rent It probably fits best in this case.