Arabesque (1966) is a textbook example of a so-so screenplay greatly enhanced by fine direction, superlative camerawork, and memorable performances. Directed by Stanley Donen, it was intended as Universal's follow-up to Donen's earlier Charade (1963), the delightful Hitchockian romantic thriller starring Cary Grant and Audrey Hepburn. The original hope was to team Grant with Sophia Loren for this film, but he had recently and permanently retired from acting, so instead the leading role went to Gregory Peck, who starred in Universal-produced films throughout that decade (To Kill a Mockingbird, Cape Fear, etc.) Arabesque's dialogue was obviously written for Grant's familiar screen persona, and one of the film's many pleasures is watching Peck essentially doing Cary Grant. It's not an imitation, but rather filtered through Peck's own acting style and yet it somehow works: Peck is very amusing throughout.

The end result is a couple of notches below the perfection of Charade (to paraphrase a line from that film: You know what's wrong with that film? Nothing!) but it still gets high marks, though its uber-aggressive visual style does get a little wearying toward the end. 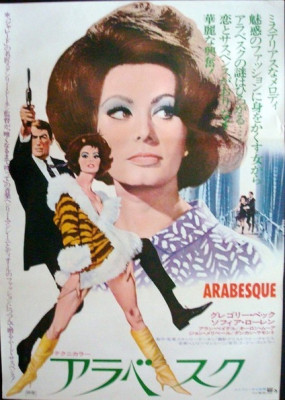 After Oxford University hieroglyphics expert Professor Ragheeb (George Coulouris) is murdered during a visit to the eye doctor, Ragheeb's colleague and substitute, Professor David Pollock (Peck) is approached by suspicious shipping magnate Nejim Beshraavi (Alan Badel) to translate an inscription on a piece of paper the size of a fortune from a Chinese fortune cookie. Almost simultaneously Pollock is also approached by Middle Eastern Prime Minister Hassan Jena (Carl Duering), whom Pollock knows of and respects, to go along with Beshraavi's request, to find out what he's up to, as the future of Middle East-British relations may be at stake.

Pollock sets to work at a mansion belonging to Beshraavi's girlfriend, the beautiful Yasmin Azir (Loren), who tells Pollock about Ragheeb's murder and suggests that once the inscription is decoded he'll surely be murdered, too. Pollock eventually escapes, holding Yasim at knifepoint, with Pollock hiding the inscription in the wrapping of a piece of candy. The bulk of the film is a series of escapes, chases and recaptures, Pollack's relationship with Yasmin cleverly the inverse of Charade. In the earlier film, Grant's true identity was never clear until the final scene; despite Hepburn's strong attraction to Grant, she was never sure she could trust him. In Arabesque it's just the reverse, with Yasmin suspected by Pollock of not being who she claims to be.

The script went through many revisions from multiple screenwriters, Donen never completely satisfied so, to hide the story's plot holes and other deficiencies, he and cinematographer Christopher Challis conspired to shoot the hell out of it, to distract audiences with an aggressive visual style. Throughout the picture, shots are staged in the reflections of mirrors, television sets, and even sunglasses, from underneath glass tables, through crystal chandeliers. When Pollock is drugged with sodium pentothal, visually Arabesque really goes for broke, with oblique angles, multiple exposures, etc. The fast and clever editing style of Charade is also amped up here.

Eventually all this showing off draws attention to itself, but it also undeniably contributes significantly to the picture's fast-pace and excitement, with its climatic assassin attempt genuinely tense. Pretty clearly Arabesque's look was heavily influenced by the Sidney J. Furie-directed, Otto Heller-photographed The Ipress File, released 14 months earlier, that spy thriller succeeding in visually distinguishing itself from the rival James Bond movies. Arabesque is among the handful of ‘60s movies to successfully emulated that look, and may even have, in turn, influenced spy films produced later in the decade. (The very 007-esque main titles were designed by Bond series regular Maurice Binder, who also did the imaginative titles for Charade.)

Peck clearly understood he was no Cary Grant, instead finding the ideal balance between Grant and his own screen persona. He's very funny throughout, and looks like he's enjoying himself immensely, this enjoyment passed along to the movie audience. Loren, here as well as in her next film, Chaplin's A Countess from Hong Kong, likewise gets into the spirit of things and is both sexy and fun to watch.

The only real disappointment is Henri Mancini's curiously unmemorable score, a far cry from his superlative work on Charade and Donen's later Two for the Road. Almost everything else clicks, however, with the supporting cast being exceptionally good, especially Badel (who would have made a great Bond villain), Duering, and Duncan Lamont, low-keyed but sinister as one of Beshraavi's men. At least I think that's who he worked for.

Filmed in Panavision, Arabesque appears derived from an older but perfectly acceptable HD transfer. The image is generally sharp with strong color. (Regrettably, the main titles are severely windowboxed.) The DTS-HD Master Audio (mono) is likewise fine. Optional English subtitles are provided on this region "A" encoded disc.

More than the usual supplements for a Kino release, Arabesque's includes a new audio commentary by critics Howard S. Berger, Steve Mitchell, and Nathaniel Thompson; an archival featurette, "Music by Mancini," filmed in 35mm and in surprisingly good condition, it's a valuable extra well worth one's time. Also included are restored trailers and TV spots, along with a poster gallery.

Most entertaining despite a problematic script, Arabesque is enormous fun and loaded with star power. Highly Recommended.