A spoof of ‘40s film noir and private eye movies, Dead Men Don't Wear Plaid was directed by Carl Reiner and stars Steve Martin, who together co-wrote the script with George Gipe. The movie is notable for integrating old film clips featuring genre icons like Humphrey Bogart, Alan Ladd, Ava Gardner and many others, playing characters interacting with Martin and others via careful editing. I saw the film when it was new, in May 1982, but not since. Almost 40 years later, my reaction to this second viewing is much the same as before: it's more clever than funny. 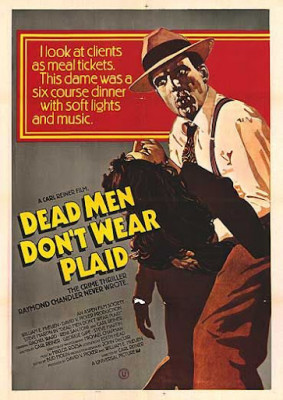 In 1940s Los Angeles, private eye Rigby Reardon (Martin) is approached by Juliet (Rachel Ward), the beautiful daughter of scientist John Hay Forrest, to investigate her father's apparent murder. Early on, Rigby discovers two cryptic lists, "Enemies of Carlotta" and "Friends of Carlotta," with those on the former list systematically being bumped off. He also comes across an autographed photo of one Kitty Collins, who may be connected to the killings.

One of the problems with Dead Men Don't Wear Plaid is that its plot is as Byzantine as the Bogie-Bacall version of The Big Sleep, primarily because this film has to build scenes around existing clips and dialogue from the 18 or so older movies it excerpts, so Martin, Reiner, and Gipe really couldn't have written a script in the usual manner and it was probably more like building a New York Times crossword puzzle. The trio's The Man with Two Brains (1983), unencumbered by such restrictions, is far funnier.

This is also the type of comedy built around jokes and sight gags rather than story and characterizations. Sometimes the jokes work, sometimes not, but with the story and characters so paper-thin, it's impossible to become completely engrossed with what's happening onscreen. Instead, one tends to look for the seams in or admire the cleverness of the editing of old and new footage.

Though already a fan of classic film noir in 1982, watching Dead Men now with more familiarity with the genre the choice of film clips is sometimes obvious. When we hear of one mystery man with a fetish for meeting blondes in supermarkets, film buffs can easily anticipate the supermarket scene from Double Indemnity (here with Martin playing Barbara Stanwyck's part, in drag). Or when Juliet tells about an alcoholic relative, sure enough it's setting up a scene from The Lost Weekend with Ray Milland. Reiner & Co. would have been better off using clips from less well-known films such as The Bribe (1949), from which it culls footage of Ava Gardner, Charles Laughton, and Vincent Price, as well as the name of Martin's character, Rigby, the same as Robert Taylor's protagonist in that mostly forgotten thriller.

Some of the editing mixing Martin with old footage is undeniably clever. There's an amusing running gag about Bogie wearing or not wearing a tie, for instance, using clips from several different movies. Another uses footage of character actor Edward Arnold derived from Johnny Eager involving a puppy (a gag I won't divulge here) that had me laugh out loud in 1982. I'd long forgotten about it when I watched the Blu-ray, and it made me laugh out just as loud again, nearly 40 years later.

At the time I recall the film getting an enormous amount of press for its ingenuity yet, from a technical standpoint, this has lost a lot of its edge. CGI today could make these scenes much more seamless, and even allow Martin to interact with characters within a single shot, technology not readily available then. Further, the older clips are generally much grainier and more worn; it would be prohibitively expensive, but one wishes newer high-def masters of the old movies could have been sourced to better integrate with the material shot in 1981-82.

The film is partly dedicated to legendary costume designer Edith Head, who died several months before the film's release. It also turned out to be the last film score by Miklós Rózsa, though he lived until 1995. For the film Rózsa did a new recording of the Universal fanfare of the late-‘30s-through-mid-‘40s, but the most interesting thing about his music is that while Rózsa scored several of the films excerpted in Dead Men Don't Wear Plaid, his music seems to be emulating Max Steiner, who wrote a number of noir scores for Warner Bros., including The Big Sleep.

Kino Lorber's presentation of the black-and-white, 1.85:1 widescreen Dead Men Don't Wear Plaid is mostly very good, though as noted above the older film clips integrated into the newer footage don't match as well as we might remember, spoiled as we are now by pristine 4K masters of classic films. The DTS-HD Master Audio 2.0 mono is acceptable, and optional English subtitles are provided for this Region "A" encoded disc.

Supplements include a new audio commentary track with filmmakers Alan Arkush and Daniel Kremer; loads of TV and radio spots and several trailers, including an amusing one consisting of Steve Martin measuring audience interest with a "Buttometer," gauging the tenseness of audience members' buttocks.

Of the comedians whose popularity took off in the late 1970s and early ‘80s, Steve Martin was, by far, the most ambitious, admirably taking chances in a wide range of roles: Pennies from Heaven, All of Me, Roxanne, Dirty Rotten Scoundrels, etc. He lost his way in the 1990s and really bottomed out in the 2000s, though he seems to have channeled his best creative work in plays and other media in recent years. Dead Men Don't Wear Plaid is something of a failed experiment, but it's very funny in places and an admirable effort. Recommended.