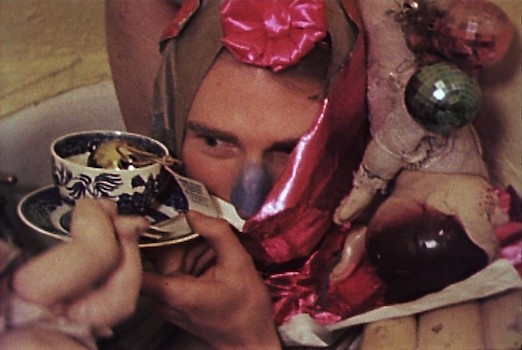 The first disc highlights films that share stylistic sympathies with Mekas's diary films and the kitsch/camp performance art associated with Warhol and Jack Smith. Of course, Smith is the trash-diva focal point of many of Jacobs's films from this era -- before he made his own infamously profane Flaming Creatures in 1963 -- and Smith is as much an auteur in these works as Jacobs.

The best-known Smith-Jacobs collaboration is probably Blonde Cobra (released in 1963), which even found its way into that book naming the 1001 Movies You Must See Before You Die. (Oh, the confused young cinephiles who are systematically watching the whole list seem VERY ANGRY about this one over on Letterboxd. How I delight in their puzzlement!) The film has a decidedly amateurish feel, with Smith acting out in a cramped New York apartment, wearing homemade costumes that are positively pioneering in trash-chic. The soundtrack and visuals are not synchronized, and Jacobs even suggests that viewers grab a radio to blast over certain passages of the film. Certain sections feature Smith delivering darkly comic monologues over black film leader, describing sexual traumas both real and fantasized. (Like Flaming Creatures, this film has had its share of scuffles with the anti-obscenity crowd. Although we can now see Blonde Cobra on a commercially released disc.)

Smith also appears in The Whirled, a 2007 assembly of different vignettes intended for Jacobs's long-gestating, 6-or-7-hour-long magnum opus Star Spangled to Death (begun in the late '50s, an official "complete" cut was shown publicly in 2004). Amidst the film's homemade ceremonies and shambolic street performances, Smith can be glimpsed spinning like a dervish and striking poses in what can best be described as proto-voguing. Smith bookends Little Stabs at Happiness, first seen in a segment where he lounges in a bathtub, smoking and doing unspeakable things to a helpless baby doll, and later glimpsed in a Pierrot costume, solemnly sucking on phallic balloons on a downtown rooftop. In between, Jacobs comments on his alienation from the friends who can be glimpsed modeling and performing in Little Stabs, Smith included. The melancholy of Jacobs's confession is counterpointed by upbeat samba records.

The Sky Socialist, a feature-length work shot over a few summers in the '60s and revised in 2019, combines more low-budget performance art (including impersonations of Hollywood figures like the Marx brothers and Orson Welles) with a little bit of neighborhood anthropology and memoir. The film's locations are mostly restricted to rooftops, alleys, and other semi-private/semi-public spaces in lower Manhattan near the Brooklyn Bridge. A lot of Jacobs's films are completely silent -- which can be mildly offputting during a home viewing, without even the whirr of a film projector or the creak of cinema seats to create an atmosphere -- but The Sky Socialist features unexpected bursts of sound after long passages with nothing. In the end, I came away feeling that this film is less immediate and focused than much of the other work included. This is despite plenty of striking imagery, such as a hip young man stuffing his face with marshmallow Peeps until it overflows in gooey, yellow drool.

I was actually more drawn in by the 47 minutes of "Environs and Outtakes" that were assembled from The Sky Socialist's leftovers. Shot on 8mm, this footage has an unforced home-movie feel and distinct time capsule value. It's interesting to see the Lower East Side as it once was, even as we see men tearing down a building at one point -- the specter of progress already haunting these bygone sights. The 1955 slice-of-life silent Orchard Street offers similar appeal, as Jacobs trains his camera on the titular bustling street, full of schmatta businesses, fruit stands, butcher shops, working-class faces, vintage signage, and offbeat architecture. It's an idiosyncratic city scene similar to Agnès Varda's L'opéra mouffe, although without Varda's musical interludes. Jacobs's eye and sense of rhythm is far better utilized here than on the frantic moving still-life of The Window, which closes out disc 1. 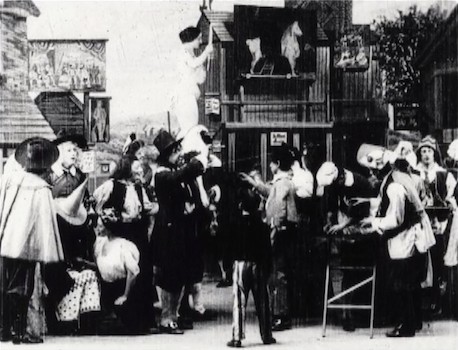 With Tom, Tom, The Piper's Son, the program shifts in a new direction. The rest of the works in the collection mostly utilize found images. The images are distorted and disassembled, both in a seeming attempt to decode them and also to reorient and "re-code" them. In many cases, Jacobs breaks down the movie-watching experience to its essence: the viewing of light and darkness.

Sometimes it is a gradual breakdown, as it is in Tom, Tom... With this film, Jacobs takes a 1905 silent short and replays it in different pieces and at different speeds, zooming in on the projected image to analyze details and sometimes zooming in so close that it becomes an abstract flurry of grayscale grain. A less than 10 minute short is recapitulated for nearly two full hours, but it's not a tedious experience.* Through Jacobs's intuitive re-photographing process, he makes both the film and the viewer more porous, so that they more fully soak each other in.

Sometimes the breakdown in structure to light and darkness is more obvious. With his "eternalism" method, Jacobs uses two projectors to alternate rapidly between the two parts of an old stereographic still image. This method is approximated on video in Capitalism: Child Labor and Capitalism: Slavery, and the effect is something like 3D without the need for glasses. It's a jittery, flickery experience -- but one that effectively brings about a hypnotic, otherworldly feeling. (Viewers with photosensitive epilepsy should naturally stay away.)

My best friend, who saw some of Jacobs's "Nervous Magic Lantern" shows in New York years ago, visited me while I watched a few films in this collection. He bemoaned the fact that the powerful hypnotic effect of the analog in-person projection was diminished on a digital TV screen. The Georgetown Loop, for example, is supposed to be projected as a diptych by two side-by-side projectors. It interpolates footage of a mountain landscape shot on the back of a train in 1903. As the footage is flipped vertically and horizontally, it turns the panorama into a kaleidoscope -- creating images that almost resemble a moving Rorschach test. This is likely why Jacobs has called it "the first landscape film deserving of an X-rating." It's a funny joke, but I'd be lying if I said the thought hadn't crossed my mind as well.

While the physical aspects of film play a big part in Jacobs's later work, he hasn't shunned video as an exploratory tool either. In A Tom Tom Chaser, Jacobs further picks apart, pulls at, and plays with the images of Tom, Tom, The Piper's Son, using video manipulation. The final film in this set -- created in 2020 -- is a flicker-based video piece called Movie That Invites Pausing. As per Jacobs's instructions, viewers comfortable with the constant undulating flicker effect are supposed to watch the film straight through and then rewatch it, pausing wherever and whenever they like. The images, which resemble digitally manipulated honeycombs, have the potential to become more vivid and colorful this second time around.

The Ken Jacobs Collection, Vol. 1 compiles some of the filmmaker's signature works, along with some lesser-known gems. Certainly, this just scratches the surface of this artist's voluminous body of work, but it's a solid place to start.

*Some might argue I "cheated" because I listened to old-timey jazz music while I watched the film, rather than watching it in stone silence. However, I found this re-contextualization of the material quite valid and not detrimental to the hypnotic effects created by the filmmaker. 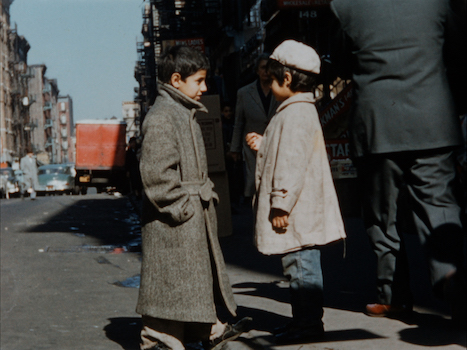 The Blu-ray
Ken Jacobs Collection, Vol. 1 is presented on 2 Blu-ray discs, housed in a standard-sized keepcase. A booklet featuring an essay by J. Hoberman is included.

The Video:
Transferring films like this to a digital format is a tricky proposition. The dirt, the damage, and especially the film grain are part of the subject matter of the movies themselves. So unsurprisingly, a lot of specks and scratches and film grain is still present on these discs. However, many of the key films, like Little Stabs at Happiness, Blonde Cobra, Tom, Tom, The Piper's Son, and The Sky Socialist have been freshly scanned and "restored." Compared to previously available SD editions and bootlegs, these AVC-encoded 1080p 1.33:1 presentations offer much detail and clarity. This is a definite upgrade. Some of the films were revised or created in the mid-'00s, and are sourced from SD video, but they have been bumped up to 1080i. Some of the most recent films fill the HD frame at 1.78:1.

The Audio:
All the films feature DTS-HD MA 2.0 audio tracks -- even the films with no sound (which is at least half of them). The audio that is provided can be a bit rough-and-tumble, but it's all part of the offbeat nature of these films.

(28:51) - A recent Zoom call that's informative and enjoyable. These two discuss Jacobs's initial interest in film, his impressions of Jack Smith, theories of performance, cinema's illusory nature, and how he came upon the original Tom, Tom, The Piper's Son. Optional English subtitles.

Final Thoughts:
I hesitate to get as hyperbolic as the authors of the 1001 Movies You Must See Before You Die, for fear that blind-buying cinephilistines will get the wrong idea. Let me take a cue from Anthology Film Archives, at least, and second the notion that the Ken Jacobs films included in this set are Essential Cinema. From the freewheeling boho performances and street scenes of the earliest films to the mind-altering flicker-pictures of recent times, this set is a collection of experiences I Highly Recommend. Eh... why sell it short? This is a DVD Talk Collector Series title all the way. 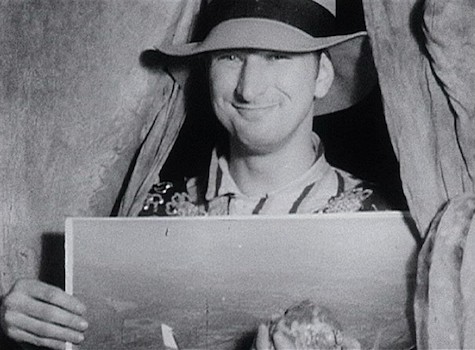