Original Cast Album: Company (1970) is a short, fascinating documentary originally intended as a pilot film, the first episode of a proposed television series documenting the soundtrack recording sessions of big Broadway shows. When its producers bailed from the well-received if one-shot film directed by D.A. Pennebaker to join MGM, the series was scrapped and Pennebaker's film was, essentially, orphaned. For the next many decades, it became almost impossible to see until 2020, when Criterion began streaming it.

One does not have to be a hardcore theatergoer to become fully engrossed. As luck would have it, the show chosen for the pilot was Stephen Sondheim's seminal Company, groundbreaking in its non-linear, vignette structure and adult subject matter. The musical centers around Robert (or "Bobby" as he's also called), a man unable to commit to a lasting relationship, about to celebrate his 35th birthday, then emblematic of middle-age, and his observations of the five married couples that make up his best friends.

Pennebaker's film serves as both a priceless record of the recording of a record chockful of great songs, but it's also fraught with drama of its own as the recording session drags on into the wee hours of the morning. 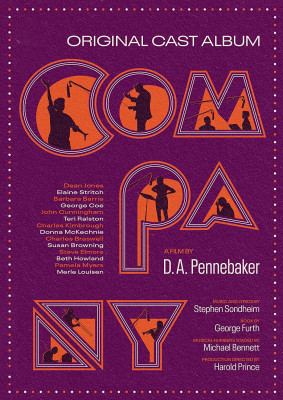 This drama mostly stems from Company's two leads. Top-billed Dean Jones had been in movies since the mid-1950s but in 1965 abruptly became the go-to leading man for Walt Disney's broad slapstick comedies (That Darn Cat!, The Love Bug, The Shaggy D.A., etc.). Between 1965 and 1977 Jones made a dozen movies; all but two were for Disney, and one of those was an Italian-made imitation Disney film (Mr. Superinvisible).

In the midst of all this innocuous slapstick, Jones agreed to star in Company, but quickly regretted that decision. He was in the midst of a midlife crisis of his own: a painful divorce, appearing in a musical partly about unhappy relationships, working in a city Jones apparently despised, all the while anything but certain that his singing ability was up to the material. Director Harold Prince agreed to Jones's request for a release from his contract, provided he stick with the show for the first couple of weeks and appear in the original cast album.

And, so, Pennebaker's film captures Jones on his way out -- but not before recording his character's big solo, "Being Alive." In the film one can marvel at Jones's intense concentration to wring every last drop from Sondheim's lyrics and music. Even his fellow cast members, who undoubtedly heard (or participated) the song in rehearsals hundreds of times were awed by Jones's performance, bursting into spontaneous applause at the end. It's a remarkable moment. Though Larry Kert would replace Jones for most of Company's run, many consider Jones the superior Bobby.

The other, better remembered studio drama involved Elaine Stritch, whose "The Ladies Who Lunch" became her (ironic) signature song. Like Jones, Stritch had been kicking around since the early-‘50s but her career had been in decline in the four or five years preceding Company, and was winning raves for her performance. But Stritch was an alcoholic known to imbibe to combat stage fright. At the recording session she swapped places with Jones on the schedule, meaning the recording of her big number would be last, after a long day of flask-nipping. When they finally get to her late into the evening, her voice lacks its characteristic brassiness and her timing is way off. And, in take after take, she gets worse and worse, until the record's producers mercifully call it a night, scheduling her to come back a couple days later, early in the morning. Sober, refreshed and confident, Stritch knocks it out of the park.

The film captures many other great moments, including superb performances especially by Pamela Myers (singing "Another Hundred People") and Beth Howland (singing the psychotic patter song "Getting Married Today," with 68 words sung in just 11 seconds). Sondheim hovers about nervously, fine-tuning the exacting pronunciation of his lyrics, and catching single notes sung ever-so-slightly off-key.

And how could I have not known all these years that the George Furth credited with the show's book is the same George Furth that appeared in dozens upon dozens of movies and TV shows from the early-‘60s through the late-1990s, often playing nervous or officious characters, perhaps most famously as Woodcock, the absurdly loyal train company employee in Butch Cassidy and the Sundance Kid. Nearly as busy as a playwright and librettist, Furth appears here wearing a distracting hairpiece, obviously aware of Pennebaker's cameras.

Criterion's presentation of Original Cast Album: Company is in 1.33:1 standard format and derived from a 4K scan of the original 16mm A/B reversal camera stock, except for the opening titles, which are drawn from a 35mm blowup. Despite the limitations of 16mm, the film looks better than ever thanks to Criterion's manual-digital clean-up work. The mono audio is drawn from the original 16mm magnetic tracks. SDH captioning is available and the disc is region "A" encoded.

Valuable supplements greatly enhance this release. They include two commentaries: a new one by Sondheim and an older one from 2001 with Pennebaker, Stritch, and producer-director Harold Prince. Best among the extras is a new conversation about the film (and musicals generally) with Sondheim, legendary orchestrator Jonathan Tunick, and theater critic and columnist Frank Rich. Ted Chapin offers a solo interview with Tunick as well. Also included are never-before-heard audio interview excerpts with Stritch and Prince; a dead-on (but not particularly funny) parody of the film from the TV series Documentary Now! as a well as a reunion of the cast and crew of that spoof; and a booklet essay by Mark Harris.