Beasts of No Nation: Criterion Collection 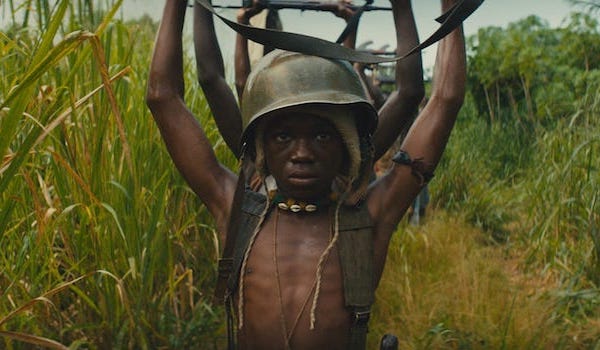 Beasts of No Nation, based on the novel by Uzodinma Iweala and directed by Cary Joji Fukunaga (True Detective season one, No Time to Die), was an independent film purchased by Netflix and released as their first attempt to enter the prestige cinema market way back in 2015. The film follows a West African boy who is forced to become a child soldier. It is a well-made and intense drama that is by turns gripping and unsettling, though it ultimately falls short of profundity. Recent Criterion Collection releases like The Ascent and Come and See speak more powerfully about the horrors of war, with Come and See particularly showing the destruction of its protagonist's childhood in more indelible terms.

Nonetheless, the lead performances in Beasts of No Nation are astonishing. Young newcomer Abraham Attah is heartbreaking as Agu, who loses his family after his village is ravaged by military forces. Agu runs and hides in a nearby forest, where he is discovered by a rebel army. The Commandant of this army, played with frightening charisma by Idris Elba, figures Agu can be made useful and conscripts him to join his underage troops. Attah portrays the corruption of Agu with unexpected nuance and intelligence, embodying both his youth and accelerated experience simultaneously. Elba meanwhile plays the Commandant like a cult leader, full of magnetic charm and gruff bravado until his mini-empire is taken from him by his superiors. Elba follows his character's pathology to its natural conclusion as this megalomania turns self-destructive.

War is hell, and Beasts of No Nation doesn't shy away from graphic violence. One feels Fukunaga trying to short-circuit the tendency of films to glamorize or fetishize this type of brutality, but his staging and cinematography is a touch too slick to be wholly successful at it. Beasts of No Nation is decidedly not the kind of film that Hollywood studios would make these days, but Fukunaga's instincts are so rooted in Hollywood style that the film feels more like entertainment than art. It's a challenging, heady, and not entirely pleasing kind of entertainment, but that's what it is.

The Blu-ray
Beasts of No Nation is packaged with a fold-out featuring an essay by Robert Daniels.

The Video:
Coming directly from a digital source, the AVC-encoded 1080p 2.39:1 presentation looks excellent. Strong detail and depth. Rich color saturation and balanced contrast. A few shots were a little underexposed but this is in the actual film, and not a result of the encode.

The Audio:
The DTS-HD MA 5.1 surround mix is not frequently overwhelmed with activity, but the sound design is very specific. When there are bursts of gunfire and explosions, the soundtrack springs dutifully to life. The dialogue is a mix of Twi and English. The disc offers two subtitle options: standard English subs for the Twi portions of the film only and an English SDH track for everything.

- A satisfying discussion both about the thematic elements of the film and the production process.


Final Thoughts:
Allow me to borrow an observation from former DVD Talk writer Jason Bailey, who described Beasts of No Nation as "a very good movie, rather than a great one." The film is well-made, well-acted, and palpably intense. But, in terms of films about children swept up in war, it lacks the documentary horror of Werner Herzog's Ballad of the Little Soldier or the shattering poetry of Elem Klimov's Come and See. Worth a watch, but I'd suggest checking out those other films first. Recommended.