A nifty pre-Code melodrama, Hot Saturday (1932) features Cary Grant in his first top-billed role along with Randolph Scott, though the main character is played by the mostly forgotten Nancy Carroll. (Grant and Scott were not yet big stars, prompting Variety to complain there was "no A-name draw in its cast.") Running a brisk 72 minutes, it's old-fashioned and racy at the same time, with both glamorous luxury and small-town folksiness on display. A surprising amount of the film was shot on location, adding yet more interest. 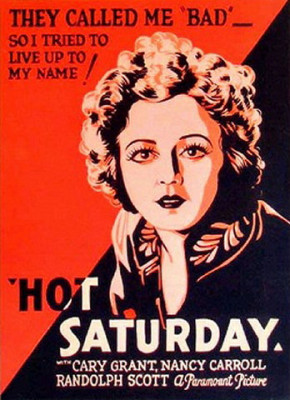 Carroll plays Ruth Brock, respected receptionist at the local bank in Marysville, a small, conservative town notable for its gossipy residents. All the men at the bank want to date pretty Ruth, as does scandalous millionaire playboy Romer Sheffield (Grant), whose suave advances she rebuffs. Romer, however, hatches a plan to invite all the young folk to his lakefront mansion for free food and real booze (this being Prohibition), figuring Ruth's date that Saturday, bank teller Connie Billup (Edward Woods), will bring Ruth along.

And indeed he does. But Connie becomes increasingly jealous when Romer whisks Ruth away for a long walk, and by the time she and Connie leave together for a nighttime boat ride he's ready to pounce on her sexually, as if staking a claim. Ruth jumps out of their small outboard and despite the lateness of the hour Connie spitefully abandons her in the middle of nowhere.

After a long walk through the woods, Ruth arrives back at Romer's mansion, exhausted, but rather than take advantage, gentlemanly he allows her to be driven back home without trying to seduce her. The next day, however, Connie lies about abandoning Ruth and a rumor spreads like wildfire that she spent the entire night making love to Romer.

Simultaneously, Ruth's childhood sweetheart, Bill Fadden (Scott), now a geologist, returns home after seven years, hoping to rekindle their long-dormant almost-romance. Ruth is as strongly attracted to Bill as he is to her, but their timing is terrible. The scandal having permeated Marysville, Ruth is fired from the bank while Connie and his new girlfriend, Eva (Lilian Bond), daughter of the bank president, decide to throw gasoline on the fire by staging an awkward encounter among Ruth, Bill, and Romer at a local nightspot.

These days pre-Code films are routinely marketed for their supposedly racy content, but literally every Hollywood movie made between roughly 1929 and mid-1934 is technically pre-Code, including many utterly wholesome pictures. Hot Saturday, however, genuinely falls in the racy category with Ruth in various states of undress, an attempted sexual assault, Bill stripping Ruth nude after she is soaked in a thunderstorm and falls unconscious, much casual Prohibition era imbibing, and accusations, real and imagined, of pre-marital sex.

The film's writers, including one woman, Josephine Lovett (who also wrote Our Dancing Daughters), have an interesting take on small town gossip and its gleefully destructive nature, and of an idle rich whose wealth immunizes them from the scandal fallout while allowing them to manipulate others with the allure of their high living.

Curiously, though, Grant's Romer may be a playboy, in an early scene paying off and sending away one woman (Rita La Roy) he's obviously been casually sleeping with, but as much as he may desire Ruth the movie makes clear that he'll bed down with her only when and if she's ready. Grant's screen persona was still forming and he came close to being typecast as suave playboys, but Grant, even this early in his career, had the talent to make each of these characters subtly distinctive and interesting.

Equally impossibly handsome Randolph Scott, meanwhile, plays a tender, decent chap, perhaps not as sophisticated as Romer (Scott's folksy Virginia accent underscoring this while adding to his charm) but understandably appealing to Ruth even more than Romer might be, for all his wealth. Without giving anything away, the movie concludes in a way that took me by surprise. Whatever its intentions, it's anything but a conventional happy ending, striking me at least as more than a little sad.

Somewhat resembling a young Bette Davis, Carroll was part of the great Exodus of talent from the Broadway stage to Hollywood with the advent of talking pictures. There her career burned brightly for a few years, Carroll nominated for an Oscar for The Devil's Holiday (1930), and she's in The Kiss Before the Mirror (1933), a James Whale-directed thriller also on Blu-ray. As her film career dimmed she returned to the stage, though did work in early television before her death in 1965. In Hot Saturday she's very good with both her leading men, as well as with William Collier, Sr., playing her sweetly indulgent father.

(Her shrewish mother, on the other hand, is played by Jane Darwell, long before she became best known playing determined but saintly matriarchs. She, too, is very good as the image-conscious, domineering mother, similar to the wives in W.C. Fields's comedies. Who knows? Maybe she came close to being cast in one of those.)

Paramount was in dire financial straits at the time, which may help to explain the film's unusual use of real locations. The bank scenes were apparently filmed in a real one, the audio having a good deal of echo in the dialogue. Grant's mansion is also the real thing, located on the banks of Lake Arrowhead, while the small town, including Ruth's home, aren't backlot streets but real residential ones, probably a stone's throw from Paramount.

Licensed from Universal, Hot Saturday looks great, the 1.37:1 standard, black-and-white image sparkling throughout. The DTS-HD Master Audio 2.0 mono is likewise fine, and optional English subtitles are provided for this Region "A" encoded disc.

Supplements are limited to a "reading"-type audio commentary track by critic Lee Gambin.