A spy film/war movie starring Alan Ladd and Geraldine Fitzgerald, O.S.S. (1946) was apparently the first such film about the Office of Strategic Services, later to evolve into the CIA. Reportedly studios were racing to produce films about the O.S.S. immediately after the war (Cloak and Dagger and 13 Rue Madeleine soon followed) but Paramount had an ace up its sleeve in the form of writer-producer Richard Maibaum, who had O.S.S. connections. Maibaum would later co-write 12 of the first 15 James Bond movies, so it's intriguing to see this, which has both conventional ‘40s Hollywood studio elements combined with proto-James Bond spy stuff.

Mostly, however, O.S.S. resembles the later British war drama Carve Her Name with Pride (1957), with Virginia McKenna playing real-life British spy Violette Szabo, a woman very much like the one Fitzgerald plays here. O.S.S. isn't quite as good as that film, but it's on a similar plane. 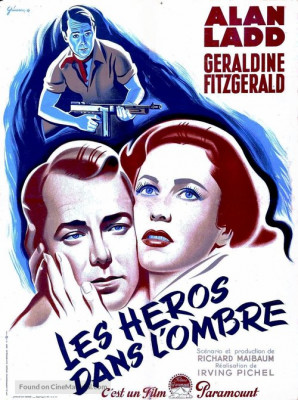 In 1942, various men and one woman are picked by the O.S.S. to work undercover in Nazi-occupied France for an operation dubbed "Applejack." After parachuting into France, John Martin (Ladd), Ellen Rogers (Fitzgerald), Bernay (Richard Benedict), and Gates (Don Beddoe) masquerade as French citizens and obtain jobs there; Ellen, for instance, as a sculptor named Elaine Dupree. Their first mission is to blow up a railroad tunnel used for troop transport, ahead of the Allied invasion.

However, Gates is quickly captured, recognized as an American because he's seen using a fork with his right hand rather than his left. Ellen, meanwhile, must contend with a Nazi admirer, Col. Meister (John Hoyt), who fancies himself an artist like Ellen. Elsewhere, Bernay gradually falls in love with his O.S.S. radio contact, "Sparky" (Gloria Saunders, unusually appealing), even though they've never met. Later, Martin and Ellen encounter a Gestapo agent, Amadeus Brink (Harold Vermilyea), who offers, for a price, to pass along top secret documents, Brink recognizing that Germany will soon lose the war.

Though O.S.S. is good enough to allow for much suspension of disbelief, Alan Ladd's hard-boiled spy strikes me as emphatically American, hardly inconspicuous considering he dresses like Philip Marlowe, complete with trench coat. Another minor problem is the convention of the time in that everyone speaks English throughout. There's no hint that the Germans are mostly speaking French, or that the undercover agents would have detectable American accents. While one could hardly expect a film that should be mostly in French with some German would have English subtitles in a 1940s Hollywood movie, but Maibaum's screenplay could have found ways to get around this, as was cleverly done later in Judgment at Nuremburg, for example.

On the other hand, Geraldine Fitzgerald is magnificent. Few ‘40s Hollywood women played characters as strong as hers is here. Indeed, throughout the film are suggestions that Ellen is of far sterner stuff than even Martin is, who makes mistakes driven by emotion and his reluctance to view her as anything other than a hindrance to the task at hand. Where Ladd is humorless and one-note, Fitzgerald's performance is impressively nuanced: during the blitz in London, she's clearly frightened by the bombs falling everywhere by courageously tries not to show it. Later, when Ladd's character tries to rescue her during their sabotage of the tunnel, she admonishes him for coming back for her and nearly blowing their carefully-timed plan.

The movie shows traces of wartime propaganda tropes - patriotic music cues and all that - but also anticipates the gadget-driven 007 movies, Ladd carrying a gun disguised as a pipe, plastic explosives worked into Fitzgerald's modeling clay, and so forth. Both the physical production and its extensive miniature special effects reflects strong studio backing.

Licensed via Universal, O.S.S.'s video transfer disappoints. Though touting a new 2K master, the first reel (i.e., the first 10 or so minutes) looks appalling, worse than a 16mm print, lacking detail and murky, and while the rest of the film, derived from an interpositive, is much better, it compares unfavorably to other black-and-white Universal and Paramount ‘40s titles. The DTS-HD Master Audio 2.0 mono is likewise fine, and optional English subtitles are provided for this Region "A" encoded disc.

Supplements are limited to a trailer and a pretty good audio commentary track by critic Samm Deighan.

Despite sourcing inferior film elements for the transfer, O.S.S. is a good enough film to warrant a purchase and is Recommended.