Yet another pre-Code Hollywood title courtesy Kino, Torch Singer (1933) is a variation of Stella Dallas, the oft-filmed tearjerker of a mother sacrificing all for the sake of her fatherless daughter, the little girl never made aware of her mother's innumerable tragedies. In Torch Singer that role is played by Claudette Colbert, who predictably is excellent. The movie, however, neatly divided into thirds, offers diminishing returns. The first and most Stella Dallasy part makes for compelling drama. After giving her baby up to ensure its future Colbert becomes a notorious chanteuse, embittered and determined to bury her past by reinventing herself. So far, so good, but in the last third circumstances refashion the torch singer into a radio sensation, a beloved, utterly wholesome children's storyteller. She uses the medium to try and reconnect with that long-lost daughter, and one imagines even 1933 audiences found the script's machinations toward this end outrageously unbelievable.

Still, Torch Singer has a lot to offer: a good cast, a mostly unflinching portrait of women struggling at the height of the Great Depression, Colbert's performance, and compelling moments sprinkled throughout. 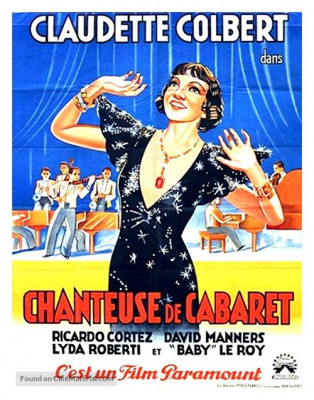 Unemployed and pregnant chorus girl Sally Trent (Colbert), going into labor, checks into a Catholic hospital as a charity case, unable even to pay for her cab ride there. She becomes friendly with roommate Dora Nichols (Lyda Roberti), and after their children are born, a girl and a boy, respectively, the new single-mothers rent an apartment together.

However, when Dora quits her job after her boss sexually harasses her, she's left with no choice but to marry a man to support her and her baby while Sally, unable to manage financially despite her best efforts, is evicted from the apartment, starving baby notwithstanding. Destitute, Sally returns to the Catholic hospital to surrender her beloved little girl, also named Sally.

Over the next several years the elder Sally reinvents herself as a racy torch singer named Mimi Benton. ("I have something grand for lumbago!" she tells one patron, huskily.) She becomes wealthy and the talk of the town, but is still miserable without her daughter. Dating radio station manager Tony Cummings (Ricardo Cortez), at the studio a woman hired to portray a Mother Goose-type storyteller on a bedtime kids show suffers crippling stage fright on the air, so Sally steps in to take her place and, as "Aunt Sally," becomes an overnight sensation.

At first Sally finds the irony of infamous Mimi Benton moonlighting as wholesome Aunt Sally hilarious, but soon realizes that she can use the show's popularity to locate her long-lost daughter.

It's at this point Torch Singer really goes off the rails. Worse than Hollywood movies about Hollywood filmmaking, Torch Singer presupposes radio programs are completely ad-libbed with zero preparation, that radio stars can get away with not showing up for their live airdate times weeks on end with no repercussions, and that Sally could get away with offering to send hundreds of dolls (at her own expense) to all kiddie listeners named "Sally" so long as they provide her with their address, etc. No doubt those working in 1933 radio rolled their eyes at all this, but one suspects even average moviegoers of the time found all this rather absurd.

Nevertheless, the short (71-minute) film has a lot to offer. For Colbert fans, it's like a three-for-the-price-of-one deal, she playing the struggling but selfless single mother, the selfish and carefree if embittered nightclub star, and the comforting radio personality. Colbert even sings, with strong vibrato, clearly her voice, and reportedly coach by no less than Bing Crosby.

And even when the film descends into ludicrous fantasy will all the radio nonsense, there are still a couple of outstanding moments. Believing she's tracked down her daughter, Sally races to an address only to find the star-struck five-year-old not only isn't her Sally, but that she's black. Nevertheless, "Aunt Sally" sweetly gives the little girl the huge box of chocolates she bought for her daughter, and shares in a charming conversation. The child here is played by Carlena Beard, sister of Matthew "Stymie" Beard of Our Gang (aka The Little Rascals), and like he that series at its peak, there's a magical naturalness in Carlena Beard's performance, with Colbert superbly playing off her naturalistic reactions.

Licensed from Universal, Kino's Torch Singer is another winner, the 1.37:1 standard, black-and-white image sparkling throughout. The DTS-HD Master Audio 2.0 mono is likewise fine, and optional English subtitles are provided for this Region "A" encoded disc.

Beyond a trailer, the real extra here is an unusually good audio commentary track by film historian Kat Ellinger, who does an exceptional job tying Torch Singer to the struggles of single working women during the Great Depression, contextualizing Colbert at this point in her career, etc. At a time when too many commentators try "winging it" with these tracks while referring to printouts from the IMDb, Ellinger's track is obviously, thoroughly researched, carefully organized and considered. This is one worth your time.

Despite the lunacy of its final act, Torch Singer is another welcome release and Recommended.