Pursuit of D.B. Cooper, The

The real-life story of D.B. Cooper has been twisted around since it happened in 1971. About the only thing historians agree on is that in 1971, he successfully hijacked a commercial airline, was given $200,000 of the airline's money (where it came from and why that much was on the plane is unexplained) and parachuted out of it somewhere over the state of Washington and was never seen or heard from again. "What happened after that is anybody's guess" says the narrator in this somewhat forgettable narrative from 1981 of how things might have played out. 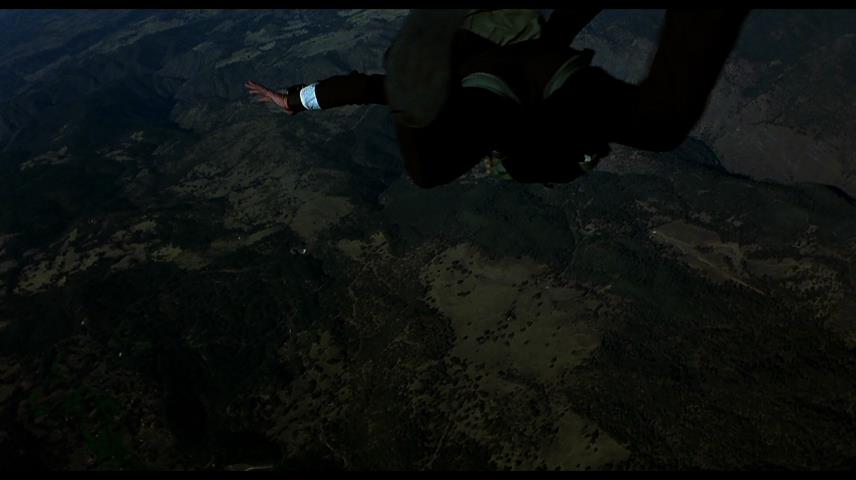 Treat Williams plays the anti-hero, and the movie opens with his stunt double making the leap out of the plane- in broad daylight, even though the actual event occurred at night in the rain. He lands in the middle of a forest during deer hunting season- he already has some supplies hidden and while the area is being searched by military he smoothly gets by them posing as a hunter. Meanwhile Bill Gruen (Robert Duvall), an agent from the airline's insurance company who is on the hook for the stolen cash, is among those at a home base trying to figure out just what happened and find the perpetrator. One of the flight attendants IDs him from a series of pictures, and it turns out that our guy is really Jimmy Meade (possible as the name DB Cooper was an alias) and Gruen happens to have been his army sergeant in Vietnam. This makes it a bit personal for him and he sets out determined to find and capture Meade.

This seems entertaining enough so far, but for a movie with the word "Pursuit" in its title things slow down quite a bit. Meade drives to Wyoming where his wife Hannah (Kathryn Harrold) runs a rafting tour. It turns out Gruen has already gone to see her and tried to trick her into turning him over, but once she's brought up to speed about what's going on she drives off with Meade. Meanwhile in Mexico, Remson (a scruffy Paul Gleason) sees a story about the hijacking in a newspaper and having also been in the army with Meade knows he's the guilty one and flies up to Wyoming to find him and take what he believes is his share of the money.

The major flaw in this movie starts showing around here, as it seems that now nobody else is still trying to find DB Cooper other than Gruen and Remson. Meade doesn't have any problem showing his face in public as long as those two aren't around. The atmosphere is kept mostly humorous as the two pursuing Meade continue to be outsmarted. Remson especially is used for comic relief as he first tries to lure the two fugitives into a car and take them, but ends up being locked in the trunk. There's a few decent chase sequences including one on a river and of course the obligatory car chase, but the pace of the movie still feels far too slow for what it should be- I fell asleep during my first viewing, granted the movie wasn't my only reason for doing so. Besides that, the events take place in 1971 but it seems little effort was made to keep things that didn't yet exist from appearing onscreen.

This was a movie I'd heard about for a long time but never got to check out until now. It left me underwhelmed, and researching it afterwards shows that it had a rather troubled production. John Frankenheimer was set to direct it, but left the project early and was replaced by Buzz Kulik whose work was mostly in TV. After most of the production had finished, Roger Spottiswoode was brought in to add one more big scene and do some editing, and he insisted on also doing several re-shoots as Kulik's work had turned out very bad, and received the sole director's credit on the movie. 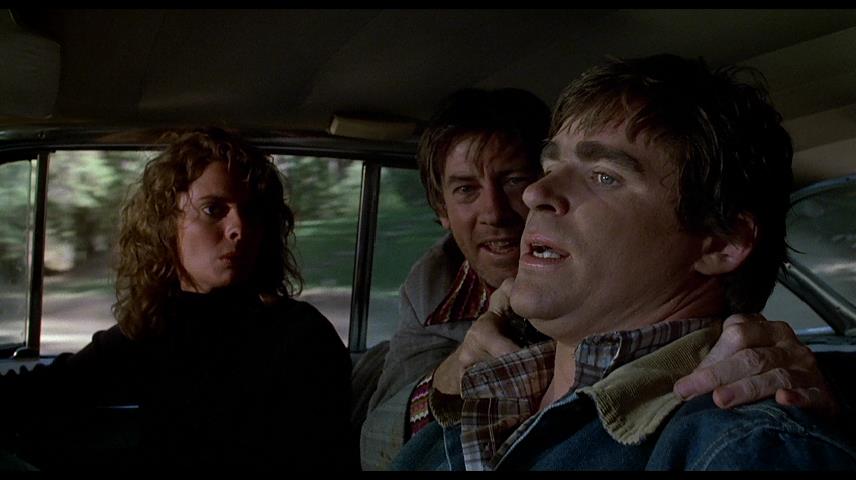 Having never made it to DVD but issued on prior formats, this hi-def transfer is disappointing. Kino gives it a dual-layer disc as they seem to have been for most of their titles lately so there are no issues with compression, but the transfer suffers mainly from filtering which gives the picture a blocky appearance- it's evident from the opening credits, appearing similar to many of Warner's early Blu-Ray titles although not as bad as those. There seems to be some digital sharpening added as well, giving it an unnecessarily harsh appearance. This certainly didn't help in my ability to stay awake through the movie.

The audio is nothing special, it's a mono mix which was common then. The disc encodes it in 2-channel DTS Master Audio but it stays properly centered with the right settings. Sound quality is adequate, some dialogue seems a bit poorly recorded. Standard subtitles showing dialogue and song lyrics are included. 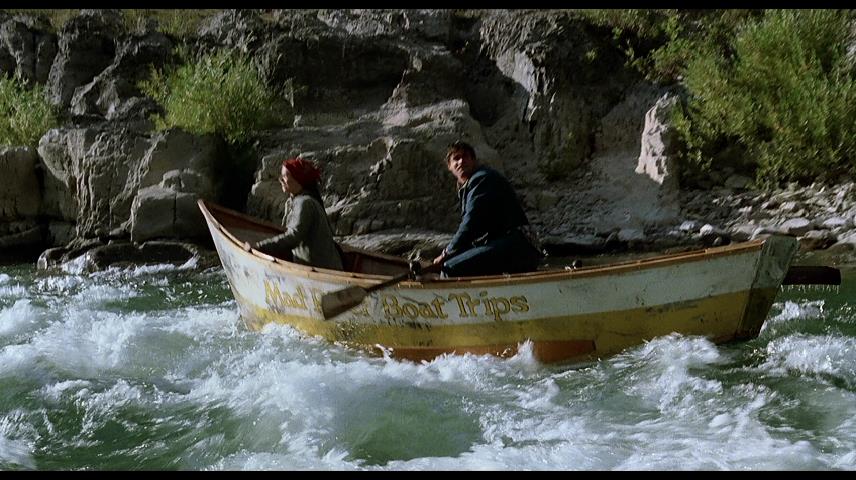 A commentary track with screenwriter Jeffrey Alan Fiskin with host Daniel Kremer is included- like most commentary tracks on Kino discs, more time is spent talking about the cast and crew in general referring to their larger body of work more than the movie they're watching. You do get reinforcement that the production of this movie was quite a mess. Two theatrical trailers transferred in HD and looking much better than the actual movie are included, one being a teaser with Buzz Kulik credited as director, as well as three radio spots and three TV spots for the movie (these are quite poor quality, looking like they were ripped from YouTube uploads of off-air recordings. They could have at least sought out the original tapes those came from and encoded them in higher quality.) Rounding out things are trailers for a few other titles available from Kino featuring the cast or themes: Honky Tonk Freeway, Take This Job and Shove It, Tender Mercies and Deep Rising. 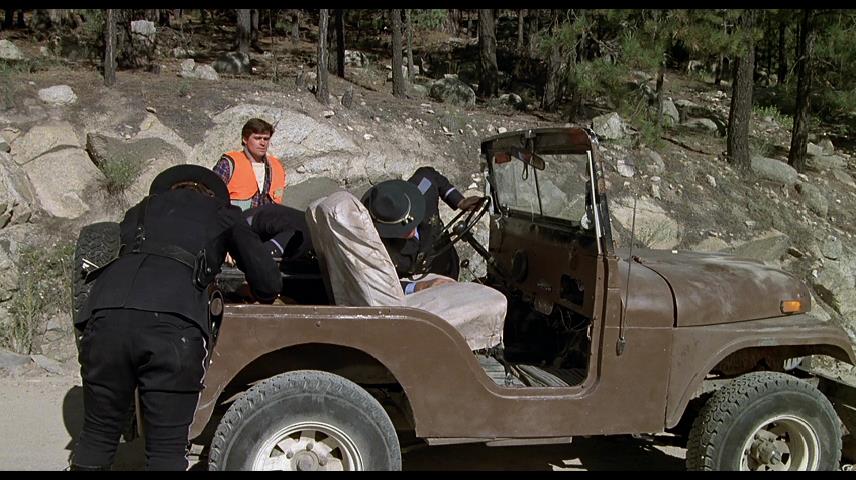 The Pursuit of D.B. Cooper is quite a let-down, but given the talent involved it still deserves a Blu-Ray release. The picture quality will likely leave fans disappointed however, and for me is the main factor that will likely not lead to many repeat viewings.