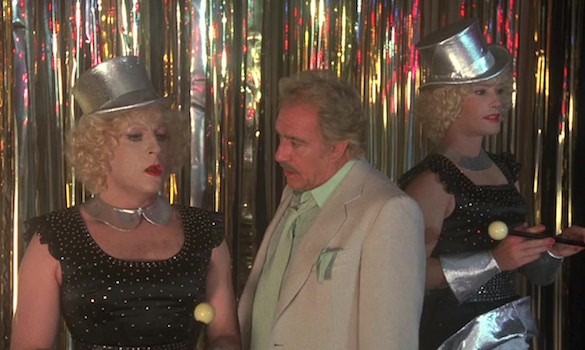 The promo images accompanying this review do not reflect the quality of the Blu-ray presentation.

The farcical French film from 1978, La Cage aux Folles, was an international sensation that scored an Oscar nomination, a Broadway musical adaptation, and (nearly two decades later) an acclaimed American remake by Elaine May and Mike Nichols. It's unsurprising that director Édouard Molinaro and his gang of writers would try to cook up a sequel in 1980, but La Cage Aux Folles II seems more distinctly influenced by the movie trends of its era than the relatively less dated original.

As you may remember (at least from the remake), the original film dealt with a gay couple who run a drag nightclub and awkwardly and hilariously try to tone down their flamboyant quirks for a dinner meeting with the conservative parents of their future daughter-in-law. For the sequel, Ugo Tognazzi and Michel Serrault return as Renato and Albin, the proprietor and star attraction of the French Riviera's La Cage Aux Folles (roughly, "The Cage of Madwomen"). Albin refuses to age gracefully, and his attempt to prove he's still got it -- dressed in public as a woman -- places him improbably in the middle of an international incident.

A defecting spy passes Albin some microfilm before the spy's own people shoot him in the back. Our heroes don't need a thermometer to tell them they're in hot water, so they turn to their conservative politician in-law (Michel Galabru) for a hand. He flatly refuses, but inevitably gets embroiled in this nonsense later down the road.

Marcel Bozzuffi, the gruff actor best known as a baddie in The French Connection, plays the head of a band of French spies who decide to use Albin as bait to get their foreign counterparts out of the shadows. One amusing setpiece has Renato teaching the spies how to be more inconspicuous by dressing and swishing more like Albin.

As in the original, Michel Serrault is both the focal point of much cartoonish comedy and the soul of the story. The film gets a lot of mileage out of how his character, Albin, doesn't fit into the real world dressed as a woman but often seems more ridiculous dressed as a man. Albin's attempt to butch up and pose as a window washer is as comically outsized as his usual operatic yelps of despair and Mickey Mouse-pitched laughter. Later, Renato and Albin go into hiding in Italy to avoid the whole spy game, and Albin is forced to pose as a woman who then poses as a man to navigate all-male spaces. Renato's Italian mama (Paola Borboni) looks at Albin in this multi-layered drag and says he "almost passes" for male from a distance.

The relationship between Renato and Albin is as charming and warm as it was in the first film, but the surrounding story seems oddly overblown. One wonders if the decision to follow-up a dialogue-driven character comedy with a slapstick spy thriller came from co-writer Francis Veber, who had had recent hits with the crime comedies A Pain in the Ass and The Tall Blond Man with One Black Shoe. While it's nice to toss Renato and Albin into a wildly new situation, Abbott-and-Costello-style, the film works more often in spite of the concept rather than because of it.

In addition to jumping on the crime-comedy trend, La Cage II threw in a recently revived trope viewers might have seen in Silver Streak or Neil Diamond's The Jazz Singer: a blackface gag. Albin tries to salvage a Blue Angel number that Renato wants to cut from the show by going on as Marlene, but covered head-to-toe in shoe polish. In 2021, the gag lands with an uncomfortable thud, to say the least. Although... it's almost saved when black housekeeper Jacob (Benny Luke) looks at Albin as the Black Blue Angel and cries, "Mama!" (Sadly, Albin's wounded racist retort to Jacob's quip definitively spoils the fun of the moment.)

La Cage aux Folles II is an unnecessary sequel, but it's not uninteresting or without any fun. Fans of the first film's central couple will surely welcome the chance to spend another 100 silly minutes with them. 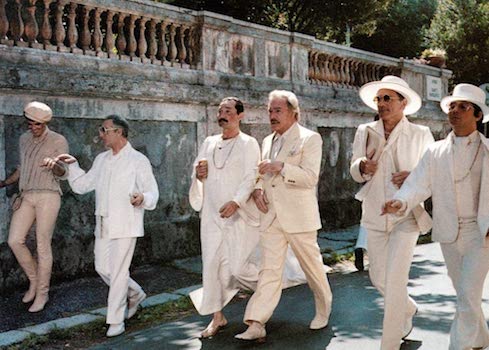 The Video:
Although the disc offers no provenance, this AVC-encoded 1080p 1.66:1 presentation looks relatively new. Fresh colors, and minimal dirt and damage. Well-resolved film grain, plus noticeable depth and clarity.

The Audio:
Both the original French and English dub soundtracks are included in DTS-HD MA 2.0 mono. The French track includes optional English subtitles that are on the small side. Don't sit too far from the screen. Thankfully, they seem pretty accurate to the French dialogue and are not "dub-titles."

- English-language trailer for this film, plus Maria's Lovers and the Cook-Moore Hound of the Baskervilles. There is no way to select them, they just autoplay, one after another.

Final Thoughts:
I had not seen this film before, and it has been years since I watched the original La Cage. Even so, as soon as Ugo Tognazzi and Michel Serrault popped back up on screen, I felt like I was reconnecting with old friends. The story is a bit far-fetched (even considering the original source material) and certain jokes have aged decidedly better than others, but this is mostly a satisfying sequel. If you're already a fan: the Blu-ray looks nice. Recommended. 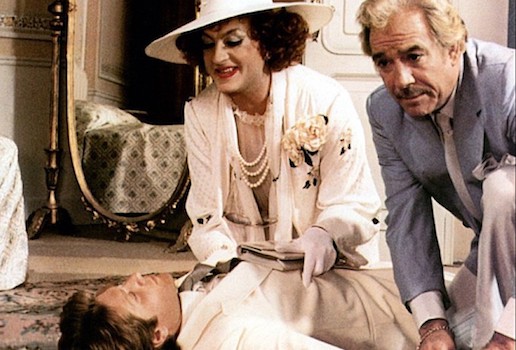