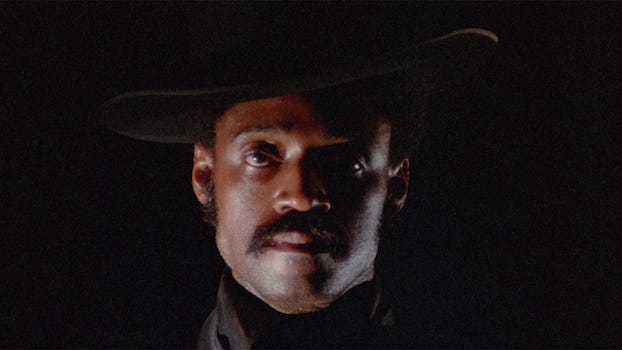 Melvin Van Peebles stands as one of the most influential filmmakers in the history of American independent cinema and especially black cinema, becoming one of the first African-American directors to work for a Hollywood studio before turning around and making one of the most successful homegrown films in box office history. That latter film, of course, is Sweet Sweetback's Baadasssss Song. It's Melvin Van Peebles's best-known film, his breakthrough, and also the film that essentially put the nail in his feature filmmaking career. Having got one over on the establishment, the establishment made sure Van Peebles never got a chance to do it again.

But, Criterion has thankfully compiled his four best-regarded films -- made in a span of roughly six years -- in their new box set Melvin Van Peebles: Essential Films. (Sadly, Van Peebles passed one week before the set was released.) The 2003 feature-length docudrama Baadasssss!, made by Van Peebles's son Mario about the production of Sweet Sweetback, is included on a fifth disc.

The first film in the set is Van Peebles's feature directing debut, The Story of a Three-Day Pass (1967; aka La Permission). This is the result of a period where, like James Baldwin and Chester Himes before him, Van Peebles went to France to write and create. The film, based on a French-language novel Van Peebles wrote, follows a newly promoted black American G.I. (Harry Baird) who hooks up with a French woman (Nicole Berger) on his first trip to Paris. They go to the seaside, where they fall into bed, do cute couple stuff, and inevitably deal with the personal and societal baggage of an interracial fling.

Three-Day Pass feels a little bit embryonic, with Van Peebles not fully in possession of his cinematic voice. The story, the dialogue, and the attitude all belong to him, but the style still feels like reheated nouvelle vague stuff. That said, a shot of Harry Baird floating in sync with the camera into the bar where he will meet Nicole Berger is such a clear precursor to Mean Streets' "Rubber Biscuit" scene and to Spike Lee's recurring floating-sidewalk double-dolly shot that both Scorsese and Lee owe Van Peebles some royalties.

Three-Day Pass was an arthouse and festival success that secured Van Peebles a three-picture deal with Columbia. He only made one film on the deal, but it was a doozy: 1970's Watermelon Man. Summer of '42 novelist Herman Raucher wrote a high-concept sitcom in which a white bigot was turned into a black man, learned his lesson, and then turned white again. The studio wanted Alan Arkin in blackface. Van Peebles went the other way and put stand-up comic and Cotton Comes to Harlem star Godfrey Cambridge in impressively convincing whiteface for the first act before letting the actor show his... er... true colors. Van Peebles also nixed the insulting ending where Cambridge's character switches back to being caucasian after becoming a better person.

This is a tour-de-force for Cambridge. We start off hating his character for how much he delights in his white privilege (of course, without acknowledging it in those terms): he makes sexist and racist jokes -- all in good fun, he'd claim -- and sees himself as the center of the world. This allows us to delight in his comeuppance when he no longer gets to be top dog, and also to snicker at his bizarre attempts to turns his skin white again with cosmetic creams and milk baths. But Cambridge lets us see the vulnerability beneath the bluster too, which allows us to root for the character when he turns that old brash energy against the white hypocrites in his life.

I have a few friends who consider Watermelon Man to be Melvin Van Peebles's best film. It's hard not to argue that it's his most focused, his most cleverly satirical, and -- with an ace comic cast that includes Estelle Parsons, D'Urville Martin, and Mantan Moreland alongside Cambridge -- his most laugh-filled film. Still, I slightly prefer the sloppiness of the films to come. 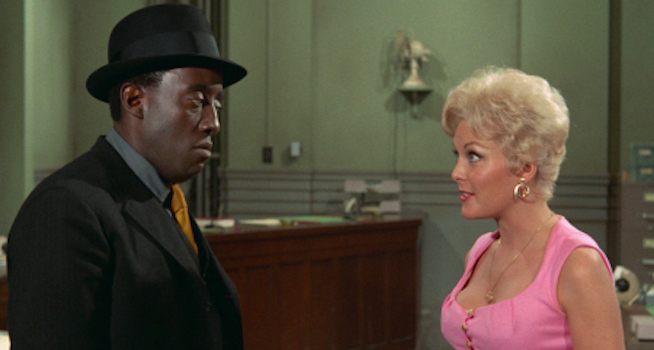 A mixture of avant-garde and exploitation sensibilities, Sweet Sweetback's Baadasssss Song (1971) is a personal statement that works as a savvy bit of showmanship. Van Peebles stars as the stoic, laconic lead character who goes from being a stud in a brothel, "training" the girls and participating in living room sex shows, to a revolutionary on the run. After giving a pair of abusive cops a taste of their own violent medicine, Sweetback becomes a wanted man. The film turns into an episodic picaresque, in which Sweetback must use his God-given talents to fight and fuck his way to freedom. Sweet Sweetback refuses to sell out its hero for transgressing society. In the film's eyes, society transgressed Sweetback first.

There's plenty of argument in cinephile circles over whether Sweetback is a blaxploitation film or not, and the multiple scenes of sex and violence certainly aim to keep grindhouse viewers' butts firmly in those cinema seats. However, Van Peebles is clearly trying to smuggle anti-authoritarian/pro-black-community concepts into his salacious crime story, while many blaxploitation flicks (including classics like Shaft and Black Caesar) just affirm the status quo by regurgitating tried-and-true Hollywood tropes.

I'm sure many initial viewers of this film were enjoying it in an altered state-of-mind, but it's still shocking that Sweetback was a runaway success considering how formally experimental it is. This film goes heavy on visual superimpositions, layered but clashing soundtracks, and disruptive Godard-style editing. You could call it "psychedelia goes dialectic." (Eat your heart out, Dennis Hopper.)

Van Peebles followed up his siege on American cinemas by taking his vision to Broadway. At one point in 1972, he had two musicals running on Broadway, Ain't Supposed to Die a Natural Death and Don't Play Us Cheap. Not bad for someone with no education in music (he created his own notation system using numbers) and possessing a singing voice that his son once described as "a frog on crack."

In that same year, he created a film version of Don't Play Us Cheap that never got proper distribution until it came to video in the '90s. The film looks like it was shot on the actual stage sets with no fourth wall; Van Peebles and returning Sweetback cinematographer Bob Maxwell frequently employ a TV-style two- or three-camera shooting set-up to capture most songs and many other sequences without interjection or interruption. Rather than try to "open up" his play, Van Peebles seems to embrace the artificiality.

The premise is so simple as to be confusing. Two imps (Joe Keyes Jr. and Avon Long) decide to break up a joyous Saturday night apartment party in Harlem for evil kicks. However, the imps are poorly matched for the good hearts of Miss Maybell (Good Times' Esther Rolle) and her guests. Keyes's imp, Trinity, even finds himself falling for Miss Maybell's niece Earnestine (Rhetta Hughes).

At first blush, it's hard to understand why this seemed like fertile ground for a musical. But as the party wears on, and the cast gradually sings various gospel-inflected blues numbers about hardships and perseverance, it becomes clear that the play is an allegory about black folks' ability to carry on in the face of whatever roadblocks that The Devil or The Man or Whitey or Capitalism or whoever puts in their way.

Don't Play Us Cheap is my less-than-conventional pick for favorite of this collection. And a huge part of that is related to the musical score and performances. "You Cut Up the Clothes in the Closet of My Dreams" is the first big number of the show, performed by Joshie Jo Armstead as though she's reaching into the pit of her soul and exposing it to the whole world. She stands simply in front of her fellow partygoers -- who offer vocal support from their seats -- and just murders the audience with this performance. The conceit is that Armstead is singing along to a record that she loves, although most of the score quaintly sounds like it is played on a rehearsal piano just off-camera. Armstead smiles through her performance, but the low-rent circumstances subtly enhance the desperation of the lyrics:

"You cut up the clothes in the closet of my dreams / You pulled off the sleeves and you ripped out the seams / You tore out the lining and the buttons were all gone / But now I've got me the strength to pull one mo' again / I'm movin' on..."

It might be my favorite song from a musical, and Don't Play Us Cheap has a handful of numbers just as good, including George McCurn's performance of "Quittin' Time," a half-spoken, half-belted lament about work that also works as a tribute to the things in life money can't buy.

After Don't Play Us Cheap failed to find a cinema audience, Melvin Van Peebles stuck to writing and theater, and then eventually became a Wall Street stock trader. He sporadically made more films, but none attained the cultural cachet of these four. Van Peebles is a singular artist, and it's heartening to have these major works restored, revived, and collected in one place. 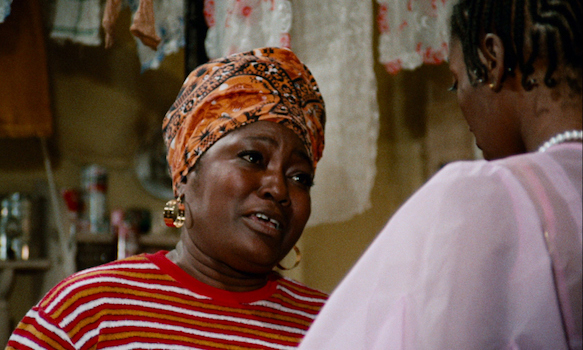 The Blu-ray
The five discs of Melvin Van Peebles: Essential Films are packaged in 4 Digipaks inside a cardboard box (Sweet Sweetback and the bonus film Baadasssss! [see below] share a 2-hub Digipak), along with a small book featuring writing by Racquel J. Gates, Allyson Nadia Field, Michael B. Gillespie, and Lisa B. Thompson.

The Video:
All four films are sourced from new 4K restorations and look uniformly excellent. Story of a Three-Day Pass and Don't Play Us Cheap are framed at 1.66:1, while the other two films are 1.85:1. Three-Day Pass is the only feature in black-and-white. In general, there is excellent detail and contrast. Some noticeable debris during optical shots (same with the later films), but otherwise quite clean and filmlike in texture. The other films all feature rich colors and strong detail. Watermelon Man is the brightest, thanks to typical Hollywood "comedy lighting." Sweet Sweetback is presented in the same restoration that Vinegar Syndrome put out in 2018 -- they even have a logo at the end of the film -- and any encoding differences are negligible. Considering how underwhelming Don't Play Us Cheap looked on DVD, the new transfer is really a positive shock, outstanding in its richness and warmth.

The Audio:
The first three films are all presented in LPCM mono mixes, while Don't Play Us Cheap comes in an unusual DTS-HD MA 3.0 surround mix. In general the soundtracks are good, but they are all limited by the budgetary and technical deficiencies of the original productions. All films come with at least one subtitle option: English SDH. Story of a Three-Day Pass also comes with a partial English subtitles track for the instances of French dialogue.

Final Thoughts:
Melvin Van Peebles's films are strange, sad, dirty, crass, clever, intellectual, avant-garde, and highly original. We might have just lost the man, but we get to keep the films. This set is, as the title promises, truly essential. DVD Talk Collector Series. 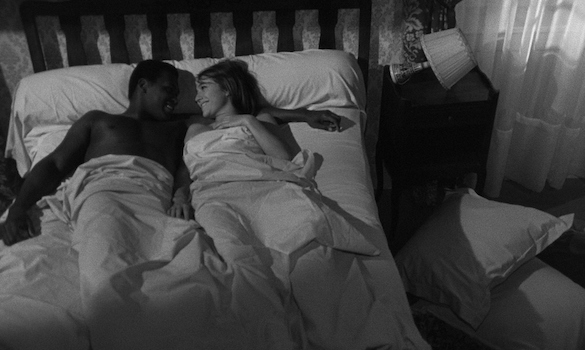