An underrated revisionist Western, Chato's Land (1972) is star Charles Bronson's best film in that genre after Sergio Leone's masterly Once Upon a Time in the West (1968) and, reportedly, one of his few starring films he enjoyed watching.

A supporting actor in Hollywood movies from the early 1950s, Bronson was a huge star in Europe and Asia but not the U.S. from about 1968 until 1974, headlining often extremely good primarily French and Italian movies like Farewell, Friend (1968), Rider on the Rain (1970), and Violent City (1970). Initially these movies, when released in the United States at all, played downtown grindhouses, but their growing popularity led to American financing from United Artists, beginning with Chato's Land, though most continued to be produced in Europe for the next few years. Chato's Land, for instance, has a British director, Michael Winner (Bronson often worked with him and Terence Young during this time), and an American and British cast, but was filmed in Spain with a Spanish crew.

Winner, in his first of six Bronson films, is remembered today for his trashy, later films with Bronson and a few even worse than those (Bullseye! for one). But he had made some very interesting British films and shorts during the 1960s, and in the ‘70s directed Lawman (1971), with Burt Lancaster, and The Mechanic (1972) and Death Wish (1974) with Bronson, all excellent.

Probably Chato's Land isn't as highly regarded because Winner is so routinely dismissed by critics and, admittedly, Winner's direction is perfunctory at best, workmanlike but uninteresting. Another possible reason, perhaps, is that Bronson is not really playing the film's central character. Though top-billed, the movie really isn't about his half-breed Apache Indian at all, but rather about the posse that pursues him. Of its 100-minute running time Bronson is onscreen perhaps 15 or 20 minutes, and probably says fewer than a hundred words, half of those in unsubtitled Apache.

But the film itself is superb, an understated allegory to an America then mired in the unwinnable Vietnam War. Its best quality is writer Gerald "Gerry" Wilson's script. As he did in Lawman, Wilson tells a familiar story, of a posse pursuing an outlaw, with an unusually high-degree of authenticity and verisimilitude, with characters that are rich and distinctive. In most Westerns, for instance, posses are generally little more than a faceless mob, with one or two heroes/bad guys leading them, with maybe a sidekick or juvenile male tossed in with the heroes, or a sadistic lieutenant with the bad guys. The posse in Chato's Land consists of about 15 men, all of whom are different from all the others, with widely varying motives and attitudes.

Another example: Where movie Westerns often feature scenes of one set of characters tracking another, just how this is accomplished is almost never explained, as if the trackers simply followed horse's hoof prints through the wilderness. Wilson's script has a simple but fascinating scene where the posse picks apart the horse droppings left by Bronson's Appaloosa, determining how far away he must be based on the dung's texture, temperature, and moistness. This exemplifies the many details most Westerns simply ignore.

Twilight Time previously released Chato's Land to Blu-ray in 2016. Both it and Kino's new release seem to use the same, older but acceptable MGM-provided transfer, grainy during dissolves and other lab-generated effects like fades and superimpositions. Both versions include an interview with writer Gerry Wilson, who clearly knows his stuff from personal experience living among the Indians and Eskimo in remote northwestern Canada and Alaska. 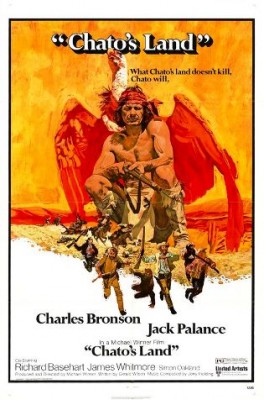 The premise has half-breed Chato goaded into a gunfight with a racist sheriff who draws on him first. Chato guns him down and simply leaves town, sparking an almost giddy posse led by former Confederate officer Capt. Quincey Whitmore (Jack Palance). (All this happens within the first few minutes of the film.)

Others join the posse for various reasons. Jubal Hooker (Simon Oakland) is an unapologetic racist. Farmhand Earl Hooker (Richard Jordan) is a sexual deviant while brother Elias (Ralph Waite) a pragmatic sadist. Nye Buell (Richard Basehart) is an old-time mountain man seemingly looking for adventure in his late middle age. Joshua Everette (James Whitmore) dutifully joins in, but only until his crops back home need tending. The most interesting character among the posse is Scottish immigrant Gavin Malechie (Roddy McMillan), repulsed by the lynch mob mentality and Jubal's racism, but worried that, if he were to decline joining in, his newly-arrived family might be ostracized from his adopted community. In a brief but interesting scene one man, Ezra Meade (a bare- and barrel-chested Peter Dyneley), does adamantly decline, on religious grounds.

In Quincey's case, it's clear his enthusiasm stems from having lived through early, invigorating victories followed by humiliating, costly defeats during the Civil War, and that his pursuit of Chato offers him a chance to restore his personal dignity, Quincy even putting on the old uniform and brandishing a saber. Whether Chato might have acted in self-defense is irrelevant to this bunch; it's never mentioned even once.

Nice touches abound. At the beginning of the film Chato is dressed like a stereotypical Hollywood half-breed, wearing a mix of Indian and white man's clothes. Over the course of the story, he gradually sheds all vestiges of white Americanism, becoming almost like a primitive man and sporting little more than a loincloth.

Bronson makes his pivotal character totally believable, partly because of his impressive physique. Though 50 at the time there doesn't seem to be an ounce of fat on his agile, muscular body. His stoic, enigmatic screen persona is even more circumspect than usual, but this works to the picture's advantage and the film allows for a warm scene where he's reunited with his wife and son, a scene where Bronson even smiles. Regardless, there's obvious intelligence behind Chato's steely-blue eyes, and combined with that prime physical shape he helps sell the idea that Chato could physically and psychologically outwit so many men.

Contemporary critics generally hated the film, singling out its, for the time, graphic violence. But what happens in Chato's Land was no different from what Americans were seeing in nightly news reports from Vietnam, and like that war Chato's Land is, impressively, uncompromisingly brutal, at times morally ambiguous and, ultimately, unforgiving.

Licensed from MGM, Chato's Land is presented in its original 1.85:1 widescreen in 1080p. Though listed as a new 2K restoration, the video transfer looked pretty much the same as the previous release, with dissolves and title elements ae on the grainy side though mostly the film looks great. The DTS-HD Master Audio mono (English only, with optional subtitles). Twilight time had offered Jerry Fielding's score on a separate track but that's not here, and while the earlier release was region-free, this one is region "A" encoded. One important note: the film was previously released in some markets in Europe and perhaps Asia with even more graphic violence not present in some earlier home video releases. Kino's new Blu-ray appears to be the complete, uncensored version. For a comparison of these various cuts visit here: http://www.movie-censorship.com/report.php?ID=949883

Supplements include the fascinating aforementioned 18-minute interview with screenwriter Wilson, who confirms the script's Vietnam War-basis, an original trailer, and a new audio commentary track by Howard S. Berger and Steve Mitchell.