Not quite horror, not exactly noir, nor precisely a gothic thriller, yet Among the Living (1941) is partly all these things. Wild and wooly, this surprising, even gobsmacking product from Paramount's under-tapped B-movie division is like a breath of fresh air for those of us who'll suffer through the worst Universal horror "classics" again and again every time a new home video medium is introduced. Among the Living is a real find. 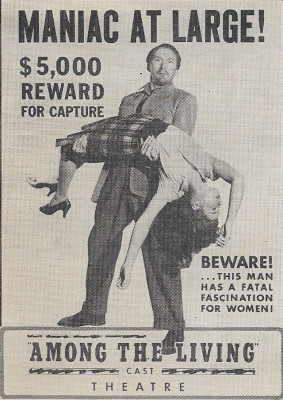 Packing a lot of story into its brisk 67-minute running time, Among the Living is set somewhere in the Deep South, opening with John Raden (Albert Dekker), son of a wealthy industrialist, returning home after many years away for his father's funeral. John and his pretty wife, Elaine (Frances Farmer), would like to tour the rundown family homestead, but family physician and all-around country doctor-type Ben Saunders (Harry Carey) and caretaker Pompey (Ernest Whitman) dissuade him for mysterious reasons. Saunders later meets with John to reveal the long-held family secret: John's twin brother, Paul, did not die at the age of ten - Saunders faked the death certificate - and is still very much alive. John, Saunders explains, was sent away to boarding school after Paul went insane after witnessing his father beat his screaming mother, the father responding by throwing the poor lad across a room, possibly triggering his delusional, now dangerous and unpredictable behavior. They keep Paul locked up at the bowels of the decaying family mansion, looked after by Pompey.

At that moment, Paul (also Dekker) becomes crazed at the thought of his father being buried next to his beloved mother, so he strangles Pompey, exhumes his father's body (we never learn what happened to it), almost kills Saunders, and makes a beeline for town. Despite his childlike innocence and demeanor (well, most of the time), using a pseudonym he rents a room at a boarding house where he befriends the landlady's daughter (Susan Hayward), she attracted to his wide-eyed inexperience and, bit-by-bit, his willingness to lavish her with expensive gifts. But Paul's dark side bubbles up to the surface. Offended by a streetwise "dancer" at a café, he follows her into a dark alley and strangles her to death. That and Pompey's murder threaten to ruin Saunders's medical career (after falsifying both Paul's and Pompey's death certificates), so he convinces John to try and locate Paul before the police do.

Key to Among the Living's success is the remarkable twofer by star Albert Dekker. Not handsome enough for leading man roles, Dekker found a niche excelling in eccentric character parts, most famously as Dr. Cyclops (1940), in The Killers (1946), Kiss Me Deadly (1955), and The Wild Bunch (1969), Peckinpah's Western classic released long after Dekker's bizarre death in May 1968, when his naked body, bound, gagged, and handcuffed, was discovered in the bathtub by his fiancée, future Love Boat creator Jeraldine Saunders.

Dekker's work in Among the Living is so good one easily forgets the two parts are played by the same actor. Particularly good is his Paul, a genuinely unsettling character somewhere between Anthony Perkins's Norman Bates and Lon Chaney Jr.'s Lennie Small. Having spent his entire adult life locked up at the family mansion, often in a straitjacket, loose upon the world he laps it up in wide-eyed wonder, fascinated by everything around him. Susan Hayward, just 23 and still new to films, is fresh and sexy and it's no wonder Paul goes ga-ga over her. Initially, she treats him sweetly, with kindness, until greed transforms her into a typical noir temptress. Dekker makes Paul just wild-eyed enough to convey to the movie audience how completely nuts he is, but at a level subtle enough it's believable when those first meeting him regard him as merely eccentric. It's a remarkable bit of acting, definitely proto-Norman Bates and ahead of its time.

Editor-turned-director Stuart Heisler is best known for a handful of titles, particularly The Glass Key (1942), a film conceivably awarded to Heisler on the basis of this. But most of his credits are unremarkable, partly due to his unimaginative direction. His Casablanca-esque Tokyo Joe (1949), with Bogey relocated to Japan, is especially bad. Yet Among the Living is brimming with atmosphere and fine pacing throughout. His experience as an editor undoubtedly helped scenes where the two brothers are onscreen together. Trick shots are minimal, as most of it is accomplished via clever cutting. Though undermined a bit by undercranking, Paul's stalking of the prostitute is especially well done.

The climax exemplifies how a big, important studio like Paramount could lavish even its B-movies with A-level production values here and there, with a HUGE lynch mob frantically searching for Paul when a $5,000 reward is announced. Pandemonium ensues, too much so, it's as if the mob were triggered by cash hidden under a big "W." The mob mentality and their willingness to string up innocent John after a mix-up is also interesting given that co-writer Lester Cole, a hardcore communist and one of the Hollywood Ten, was blacklisted and never worked under his own name again.

It's also oddly fascinating to see veteran actor Harry Carey playing a country sawbones (a very Carey-type part) who's broken the law and ready to throw an innocent man under the bus to save himself (very un-Carey like).

Licensed by Universal, Among the Living gets a fairly pristine black-and-white, standard (1.37:1) frame transfer, the image impressive throughout. The DTS-HD Master Audio mono is also excellent, and supported by optional English subtitles on this Region "A" encoded disc.

Supplements are limited to a trailer and an audio commentary track featuring film scholar Jason A. Ney.

A real delight, Among the Living is Highly Recommended.