You're forgiven for mistaking The Mad Doctor (1942) as a "second cycle" Universal horror movie. Outwardly it certainly suggests one. The film stars Basil Rathbone, late of Son of Frankenstein (1939) and soon to enter a long run of Universal-produced Sherlock Holmes movies. Co-star Martin Kosleck would soon stake a claim in Universal's bush league horror films of 1944-46. Another co-star, Ralph Morgan (brother of Frank), also did his share, and would give an impressive performance as a monster himself in PRC's surprisingly good no-budgeter The Monster Maker (1944).

But The Mad Doctor is not Universal but Paramount, a studio hardly known for its horror films, at least not after the early ‘30s, nor is The Mad Doctor really a horror film at all, though it certainly pretends to be one. Instead, Rathbone plays a Bluebeard type, marrying and knocking off his wealthy wives for their cash. Overlong by two reels at 90 minutes, the film isn't terrible, just instantly forgettable. There's some interest here and there, mainly concerning Kosleck overtly gay companion, and how in emulating the Universal style, Paramount's team nails some things while getting others oh-so-wrong. 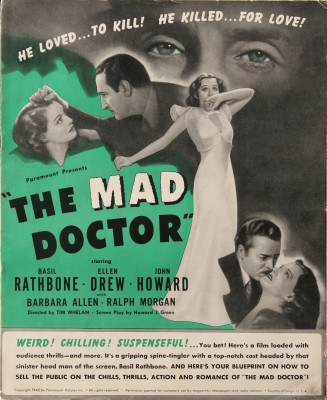 Small town doctor Charles Downer (Ralph Morgan) rushes to the home of psychiatrist Dr. George Sebastian (Rathbone), whose wife is recovering from pneumonia. Downer thought her nearly recovered, but when he arrives he finds Sebastian distraught: his wife unexpectedly died in her sleep. Or so he says. Soon after Downer departs, shaken by the loss, Sebastian haughtily complains to companion Maurice Gretz (Martin Kosleck) about his wife's bad taste in furniture, antiques, even wallpaper. It quickly becomes apparent that Sebastian has murdered the poor gal for her money.

Months later Sabastian has reestablished himself as a psychiatrist for ladies in Manhattan's high society. Flighty Louise (Barbara Jo Allen, aka radio personality Vera Vague), wife of newspaper publisher Lawrence Watkins (Hugh O'Connell), asks Sebastian to look after her friend, suicidal Linda Boothe (Ellen Drew). Her fiancé, reporter Gil Sawyer (John Howard), has had no luck with Linda, who tries jumping from the ledge of a high-rise, realized via an impressive optical matte.

Sebastian takes over Linda's life, Svengali-style, much to Gil's annoyance; he thinks all psychiatrists are quacks or "destroyers of souls." Sebastian, for his part, genuinely falls for Linda and changes his plans about killing her, much to Maurice's annoyance; he wants Sebastian for himself. But the mad doctor's plans go awry once Dr. Downer turns up in the Big Apple, determined to expose Sebastian for the serial murderer he is.

The picture opens well, with 3-D block titles dripping with water from the torrential rain falling behind them. There's a murder late in the story that's almost shocking; almost because the critical shot of the deed, again incorporating clever optical effects, was obviously cut by the studio (presumably at the behest of the Production Code), resulting in a dissatisfying jump cut. Unlike Paramount's far more intriguing Among the Living (released simultaneously by Kino), here Paramount doesn't so much imitate Universal as shoehorn their own house style into this grim tale, complete with requisite glamourous nightclub sequence and palatial Manhattan penthouses.

Rathbone reportedly insisted on script changes before he agreed to accept the role. I suspect those changes involved the film's awkward bid for sympathy for Rathbone's lovesick Svengali. No matter that he's a serial killer going around insulting his victims' choice of wallpaper, he's got feelings, too! Another argument in support of this theory is that, years later, Rathbone starred in a film called The Black Sleep (1956), which similarly tries to muster up some sympathy for that destroyer of souls, and there it almost works.

It was strange indeed to watch John Huston's intelligent, sensitive film of Freud one evening before The Mad Doctor, in which the film's hero adamantly insists all psychiatrists are charlatans and malicious manipulators of the gullible. While the picture itself is very minor, it's certainly among the most anti-psychiatry movies I've seen.

The real eyebrow-raiser of The Mad Doctor is Martin Kosleck's obviously gay-as-a-French-horn companion, though if the intention was to suggest Sebastian was bisexual, Rathbone was having none of that. Nevertheless, Kosleck's Maurice unsubtly hints at his sexual orientation throughout, overtly so while admirably avoiding ‘40s Hollywood stereotypes, presumably because Kosleck was himself gay and knew how to play one.

Licensed from Universal, The Mad Doctor is presented in black-and-white and 1.37:1 standard frame, reportedly a new 2K master, but it sources inferior film elements without explanation. The image is watchable, but several steps away from an original negative. As sometimes happens in these cases, even the trailer included as an extra is both cleaner and sharper. The DTS-HD Master Audio mono is in better shape. Optional English subtitles are included on this Region "A" encoded disc.

Genre completists might want to look at The Mad Doctor but I found it generally bland, with only a few points of interest. Rent It.