Back in the early days of VHS and Betamax, many of the early, British films of director Alfred Hitchcock were available but the video transfers of these wrongly-assumed public domain releases were generally so terrible as to render the movies virtually unwatchable. That changed dramatically during the Blu-ray era, with gloriously restored high-def releases of movies like The 39 Steps (1935) and Jamaica Inn (1939), transfers so good even "lesser" Hitchcock films can at long last be fairly reassessed. Indeed, part of the glory of watching something like Kino's new release of the BFI-restored Number Seventeen (1932) is that the experience is akin to seeing an Alfred Hitchcock movie for the very first time.

Hitch himself thought Number Seventeen was something of a disaster, though he conceded the miniatures-dominated climax came off well, and later he confessed some additional fondness for it to writer William K. Everson. Regardless, it's Hitchcock's direction that keeps Number Seventeen interesting. It's a flawed, even hopelessly confusing film, but it's also wildly imaginative in terms of its direction, and at barely over an hour long is never dull. 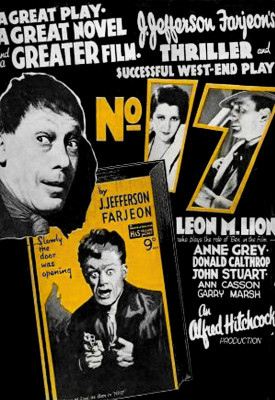 The film begins well, on a dark and windy night, the wind blowing the hat off a man (John Stuart) who catches it in front of a deserted house (Number 17) for sale or rent. Yet, through the window, he catches sight of a moving candle, and since the front door is unlocked, ventures inside to investigate. Most of this is accomplished via a single, roving shot: through the door, up the stairs, etc. The handheld camerawork is a little wobbly, but it's ambitious and effective.

Inside the house the man, Forsythe, discovers Ben (Leon M. Lion), a cockney claiming to be an out of work sailor but really more of a hobo. On a third-floor landing they find a dead body, and when Ben later searches the dead man's pockets, he discovers a pistol and a pair of handcuffs. Continuing about the house, a young woman from next-door, Rose (Ann Casson, daughter of Sybil Thorndyke), falls through a skylight, she in search of her father, Ackroyd, who left home to search Number 17 sometime earlier.

Clues gradually point to a stolen necklace and a rendezvous among thieves as yet more suspicious characters arrive, including Nora (Anne Grey), a deaf-mute moll (?) of one of the several gangsters, all converging to escape with the jewels via an underground passage leading to a trainyard where they hope to catch the next train ferry to Germany. (The jewels are hidden in a toilet tank, nearly three decades before Hitchcock's Psycho famously showed one onscreen.)

There are two fundamental problems with Number Seventeen. The first is that almost all the characters pretend to be what they're not: policemen claim to be thieves, thieves claim to be lawmen; even the deaf-mute might not be, and the eager-to-please hobo acts suspiciously. The script keeps this Byzantine charade up until literally the final minutes of the film, and for the viewer it's more exasperating than amusingly challenging.

The other problem is Leon M. Lion's Ben. The movie was adapted from Joseph Jefferson Farjeon's 1925 play, which also starred Lion. He gets top billing in the movie which he also produced, Hitchcock couldn't stand him, and it's easy to see why. Lion's Ben is overemphatically cockney, a very Hollywood-like miscalculation of what all working-class English are supposed to be. Within just his first few minutes of screentime, Lion exhausts every cockney stereotype: a machine-gun spraying of "Cor, blimeys," "It ain't ‘im what done its," and "Look Guv'nors" like an abridged reading of Oliver Twist. Amusingly, Lion's role is effectively the British equivalent of Mantan Moreland in a Charlie Chan mystery, but Moreland was a lot funnier in vastly inferior movies. (It also doesn't help that Lion wears a distractingly awful hairpiece, seemingly fashioned from straw.)

Nevertheless, Hitchcock delivers, again and again. His fight scenes and some of the other action are let down by weak foley (sound effects) and he undercranks the camera to unintended comical effect, but they're cut together far more imaginatively than just about anything until Peter Hunt's cutting of the James Bond movies. And there's a set piece that's pure Hitch: two of protagonists, tied to a rickety third-floor bannister, try to free themselves but break the bannister instead, leaving them helplessly dangling several stories above the floor below.

The movie (co-scripted by Hitchcock and wife Alma Reville) gains steam, literally, when it becomes a nighttime chase to the English Channel between a speeding, eventually runaway steam locomotive and a commuter bus commandeered by the hero. The sequence is dominated by toy-like miniatures, but state-of-the-art by 1932 standards, and Hitchcock minimizes their fakery with dynamic, quick cuts, even generating moments of genuine suspense with just the miniatures!

Less acknowledged but even more impressively, Hitchcock shoots the various characters on the train, climbing all over it, from engine to caboose, in startling ways, sometimes using imperceptible split-screen effects, at other times using techniques I couldn't begin to guess. (For instance, a number of exterior shots follow the runaway train from angles too far away for the camera to have been rigged to a boxcar, yet too smooth in their execution to have been photographed from a car running alongside it. How'd he do it?)

Licensed from StudioCanal and featuring a 4K restoration completed by the British Film Institute, Number Seventeen looks remarkable, as good as the very best looking early-‘30s black-and-white features on Blu-ray. The image is remarkably clean and clear, like a brand-new print struck from a pristine nitrate camera negative. The audio, DTS-HD Master Audio mono, is also far cleaner and more discernable than those awful early VHS releases, though I still opted to turn on the optional English subtitles to catch all the dialogue. Region "A" encoded.

Good supplements abound, including a new audio commentary track by critic Peter Tonguette; audio excerpts from Hitchcock/Truffaut, with Hitch discussing the film for about five minutes; Hitchcock: Films de Jeunesse (1926-1934), a French-made documentary covering Hitchcock's British period and featuring Claude Chabrol as one of the commentators; an introduction in French by critic Nöel Simsolo best watched after seeing the film (when you can also place bets to see if Simsolo's cigarette ash can hang on for the entire segment). What's billed as a trailer is clearly something contemporary, though it fooled me for about half of its running time.

All-in-all, pretty good Hitchcock, very much worth seeking out. The transfer looks great and the extras are worthwhile. Highly Recommended.