For me, Kino's new Blu-ray of The Brass Bottle was an exercise in nostalgia. I had seen it only once before, and that was on commercial television (UHF, no less) at least 45, perhaps closer to 50 years ago. At the time, the older kid version of me found its story of a mild-mannered architect stumbling upon a genie determined to grant his every wish mildly funny but strangely pleasant in other ways, observations confirmed watching it again all these decades later. Similar in approach to Disney's live-action comedies of the time, this Universal production starring Tony Randall, Burl Ives, and Barbara Eden is mostly standard stuff, but Ives is particularly good. Both he and the dialogue and characterization fashioned for him by journeyman screenwriter Oscar Brodney is a cut above the usual sort of character one expects to inhabit a fantasy-comedy of this type. 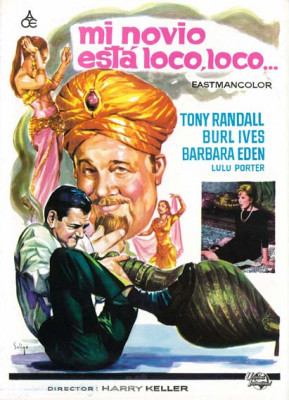 Hoping to impress Professor Kenton (Edward Andrews), the father of fiancé Sylvia (Barbara Eden), struggling architect Harold Ventimore (Tony Randall) buys an antique "kum-kum," an enormous brass bottle. ("My kum-kum came!" exclaims Harold upon its arrival.) But when he discovers something nearly identical being used as a table lamp at Kenton's home, an embarrassed Harold takes it home, opens it up, and out pops Fakrash Al-Amash (Burl Ives), a genie eternally grateful for being released from the bottle after 3,000 years.

Naturally, at first Harold thinks this some sort of gag, but Fakrash's magic soon convinces him the genie is, in fact, real. Eager to please, the Fakrash uses his powers to send millionaire developer Samuel Wackerbath (Parley Baer) his way, commissioning Harold to design a state-of-the-art modern community worth millions. Harold's newfound success only marginally sways finicky Professor Kenton, and that relationship quickly deteriorates when Fakrash, trying to help, arranges a Caliph-scale dinner for Harold, Sylvia, Professor Kenton and his wife (Ann Doran), complete with slaves, belly dancers, and delicacies including lambs' eyes baked in honey. In desperation, Harold confesses all to Professor Kenton, but that only expedites Harold's inevitable trip to the funny farm.

The Brass Bottle is loaded with the type of visual effects/sight gags common to Disney live-action comedies; indeed, the plot is similar to Disney's later Blackbeard's Ghost (1969). The special effects are plentiful but not as well executed as Disney, though this hardly matters. They're not what makes The Brass Bottle better than average for this type of film.

Rather, it's the quieter, lower-key scenes with just Tony Randall and Burl Ives where it really comes to life. Both the script and Randall's performance portray Harold as uncommonly sensible. One very good scene has Fakrash trying to please his new master with a treasure chest of gold bars and another with loaded with jewels. Though impressed, Harold realizes he can't accept them: owning that much gold is illegal in the United States, and a chest of jewels would only raise suspicion among authorities about their origin. Fakrash, trying to help, turns the gold bars into $10 bills, but Harold realizes the money would be recognized as counterfeit.

Even better is Burl Ives's playing and the character he plays. Ives's melliferous folk singer voice and rotund body are just right, and Brodney's dialogue has a rich, archaic flavor. When speaking of Harold: "The best of mortals! A prince among princes! A man of such magnificence his brilliance makes the sun turn pale, in comparison. He stands tall and straight like the Cedars of Lebanon! And has the heart of a lion. When he walks, the ground trembles and the mighty oak turns green with envy." And, after a side trip to the Middle East: "And Jerusalem is changed. So changed, I knew it not. And this will surprise thee. Babylon and Nineveh -pfffft - gone."

The conflict in the relationship between Harold and Fakrash is that the genie tries too hard to please Harold using standards of 3,000 years in the past. He marvels at the technological advances of mankind, and earnestly tries to adapt to modern times, eventually changing out of his Arabian Nights garb into a three-piece suit, but struggles to comprehend all the societal and cultural changes. Nevertheless, he's a genie who always seems to be enjoying life, truly wants to make Harold happy, and it's he, far more than the fantasy slapstick, that makes the film enjoyable.

The film is amusing from another perspective: it directly inspired writer-producer Sidney Sheldon to create the popular sitcom I Dream of Jeannie (1965-70) and, initially reluctantly, the casting of Barbara Eden in the title role. Of course, here she plays a mortal and her part is tiresomely written, her character frustrated by Harold's seemingly crazy behavior (the part likely inspired by Nancy Olson's similarly frustrated fiancé in The Absent-Minded Professor), but Eden, as she always was during this period, is almost distractingly sexy. Of course, many changes were made for the TV show, but Jeannie, like Fakrash, has the same determined-to-please character.

Licensed from Universal, The Brass Bottle has the same bright, sunny, primary-colored look of Disney's live-action films, with only the special effects opticals exhibiting graininess and color issues. Mostly this 1.85:1 widescreen presentation looks great. The audio, DTS-HD Master Audio mono and supported by optional English subtitles, is more than acceptable. Region "A" encoded.

Included is a trailer and a new audio commentary by author Lee Gambin, which features an interview (apparently done over the phone) with Barbara Eden. The audio on the track is sometimes poor and Gambin's style of commentary is, at least for me, an acquired taste, but there's a lot of good information there.

While no lost comedy classic, The Brass Bottle is a bit better than what one might expect, a good family film kids will enjoy for the slapstick and fantasy aspects, while adults should find Randall and especially Ives amusing. Recommended.