Secret of the Blue Room, The

When it was more active as a home video label, Universal notoriously released and reissued its classic horror films from 1931-46 again and again: on VHS, laserdisc, DVD, Blu-ray, often frustrating fans of such films by compelling them to buy the same movies over and over, not just with each change in format but also by repackaging them in such a way that one would have to rebuy the same title multiple times in order to get a couple of more obscure ones. (Block-booking?) But buy them we did, again and again, even dreadful potboilers like She-Wolf of London, Captive Wild Woman, and Universal's dreary "Inner Sanctum" mysteries.

And yet, there were other Universal titles the company seem to have little interest in, and which fans were either unaware or didn't want because they lacked a big horror star like Boris Karloff or Bela Lugosi, or because they were barely or not at all horror films that merely resembled one.

Some of these not-quite-horror films, such as The Secret of the Blue Room (1933), are ripe for rediscovery. Though essentially a whodunnit mystery set in a creepy castle, using tropes that were old hat by 1940, let alone 2021, it's wonderfully atmospheric, has a terrific cast and, rare for movie mysteries of the period, plays fair with its audience. (Forgive this little boast but I worked it out about 25 minutes into the story.) Overall, it's far superior to almost all of the bona fide horror movies Universal made after 1940. The video transfer is excellent and the disc includes an immensely enjoyable audio commentary by Michael Schlesinger. 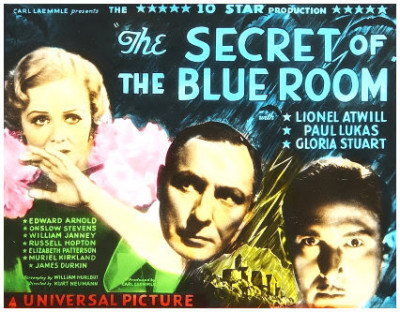 Somewhere in Europe, on the occasion of her 21th birthday, Irene (Gloria Stuart) celebrates with her father, Robert von Helldorf (Lionel Atwill), and three suitors: Capt. Walter Brink (Paul Lukas), Frank Faber (Onslow Stevens), and Tommy Brandt (William Janney). Tommy takes Irene aside and confesses his puppy dog-like love for her, but she laughs it off. Later, the conversation turns to the castle's "Blue Room" where, years before, three people, including Robert's wife, all died in turn under mysterious circumstances, all at precisely 1:00am.

Tommy, anxious to impress Irene with his supposed manliness, proposes that each suitor take turns spending the night locked in the ominous Blue Room. Robert doesn't like the idea, but allows the challenge to proceed, with Tommy sleeping there the first night. Sure enough, the next morning, there's no answer when the butler, Paul (Robert Barrat), knocks on the locked door. The others break in and find Tommy gone, presumed to have fallen out the window and drowned in the moat below just like the Blue Room's first victim years before.

What happens next this reviewer won't reveal, but this Kurt Neumann-directed film does a splendid job maintaining suspense and atmosphere throughout its 66-minute running time, even when it leans heavily on genre clichés. (One subplot is lifted whole cloth out of The Hound of the Baskervilles.) The Secret of the Blue Room was Universal's cheapest production that year -- it cost just $69,000 -- but doesn't look it thanks to its judicious reuse of standing sets, notably the main hall built for The Old Dark House, stock exterior footage from the 1932 German film it remakes (Geheimnis des blauen Zimmers), and stock music, including the inevitable "Swan Lake" main title cue also heard in Dracula and The Mummy. The movie was shot in a matter of days instead of weeks but only rarely suggests this; in the middle of a long take Lionel Atwill momentarily seems to forget a line, resulting in a very pregnant pause. He recovers, just, avoiding a second take.

The fine acting across the board goes a long way to sell even its most outrageous aspects. Lionel Atwill, often very theatrical (as in Son of Frankenstein, Sherlock Holmes and the Secret Weapon, etc.), delivers an appropriately nuanced performance throughout. The last third of the story features the great character actor Edward Arnold as police Commissioner Forster, and his likewise subtle performance, even when spouting trite dialogue, may have helped keep the other performers in check. Lukas, Stevens, and Janney all service their parts well, and Gloria Stuart is so lovely throughout we don't even mind when the narrative stops dead so she can sing at the piano.

Licensed from Universal, The Secret of the Blue Room looks very good on Blu-ray, the black-and-white, 1.37:1 standard screen image only a half-notch below other Universal Blu-ray releases from their first cycle (1931-36) of horror movies, with close-ups coming off particularly well. The audio, DTS-HD Master Audio mono and supported by optional English subtitles, is more than acceptable. Region "A" encoded.

The lone extra is an exceptional one, a new audio commentary track by Michael Schlesinger. His encyclopedic knowledge of classical Hollywood history lends itself to great observations about the film's influences, genre tropes, continuity and story structure/script issues, and astute opinions about the cast and primary crew, peppered with amusing personal stories related to the film, even one about a particular chair used in one scene. It's a very enjoyable track.

Of Universal's horror wannabes, The Secret of the Blue Room is not only one of the best, but far superior to many "official" Universal Horrors, making for a very entertaining 66 minutes. Highly Recommended.