For the uninitiated, giallo, in the movie sense, refers to a primarily Italian film genre that developed during the 1960s, peaking in the first half of the 1970s before gradually trailing off significantly by the end of the decade. These distinctive movies were generally mystery-thrillers, usually incorporating psychological horror and erotic elements. They are often puzzle films, typically revolving around a protagonist trying to solve a murder or series of murders with bizarre and/or inexplicable aspects. Sometimes the protagonist witnesses a murder or seemingly innocuous or confusing incident that only makes sense during the climax, when All Is Revealed, and here the best giallo are often very clever. Pushing the boundaries of sex and violence, these films are somewhat similar to Hitchcock's later thrillers (Marnie and Frenzy are very giallo-like) and often featured an American star or two in leading or guests roles, such as Karl Malden and James Franciscus in the classic Dario Argento film The Cat o' Nine Tails (1971), though later the genre proved so popular that Hollywood names were no longer required. And, like Argento's film, giallo often had cryptic titles frequently incorporating animals: The Bird with the Crystal Plumage, A Lizard in a Woman's Skin, etc.

Arrow's Giallo Essentials is a boxed set of three such films: Possessed (1965), The Fifth Cord (1971), and The Pyjama Girl Case (1977). Whether they are truly "essential" is up for debate. Possessed is more proto-giallo, the film quite different, albeit in fascinating ways, from the genre whose components wouldn't fully crystalize until about 1970-71. The Fifth Cord is visually stunning but also hopelessly confusing, and The Pyjama Girl Case, made as the genre was petering out, drops many giallo conventions and was even filmed on location in far-flung Australia. Nevertheless, all three video transfers are superb and each disc is packed to the gills with supplementary features. 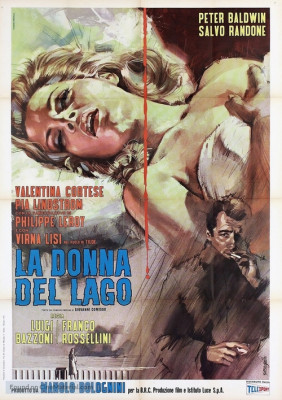 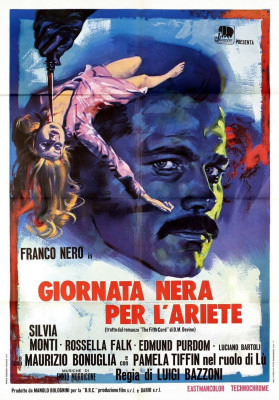 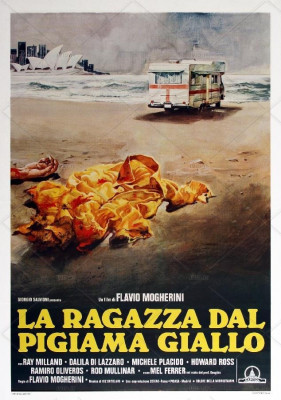 Described as "proto-giallo," I expected The Possessed (La donna del lago or, "The Lady of the Lake," 1965) to be something along the lines, if inferior to, Mario Bava's seminal The Girl Who Knew Too Much (1963), the movie often regarded as the first bona fide giallo. Instead, the picture is nothing like Bava at all. Indeed, watching it, I kept thinking its stark black-and-white photography and Italian Alps foothills setting, with its barren trees and depopulated streets, resembled the early ‘60s work of Ingmar Bergman.

American actor Peter Baldwin stars as Bernard, a famous writer who returns to an Italian resort town during its off-season, hoping to reconnect with a hotel maid he only fleetingly knew but who he's since become so obsessed with he's considering leaving his current girlfriend (whom Bernard speaks with over the phone in the opening scene). At the hotel owned by gregarious Mr. Enrico (Salvo Randone) and his middle-aged daughter, Irma (Valentina Cortese), Bernard is told that the maid, Tilde (Virna Lisi, seen in flashbacks), was dead, having recently committed suicide.

However, Francesco (Pier Giovanni Anchisi), owner of a local photography studio, tells Bernard that Tilde didn't commit suicide, that she was murdered, poisoned with her throat slashed, and that, further, she was pregnant at the time of her death, Francesco projecting a slide taken by Tilde's friends showing her several months along.

Peter becomes determined to learn the truth about what happened, which in turn generates growing animosity and tension with Enrico and his son, Mario (Philippe Leroy), one or both of whom may have sexually assaulted Tilde. Mario is recently married to Adriana (Pia Lindström, the first daughter of Ingrid Bergman), who seems to want to communicate her own concerns to Bernard. Meanwhile, Bernard, perhaps poisoned, becomes ill and his thoughts about Tilde's fate blur reality, daydreams and nightmares, and take the form of hallucinations.

Despite good reviews the film flopped at the box office, ironically prompting its producer to retrench for his next production, resulting in the seminal spaghetti Western Django (1966). The evocative black-and-white cinematography by Leonida Barboni is artful without drawing attention to itself, yet recalling as scholar Richard Dyer notes in his video appreciation of the film everything from Bergman to Renais to Antonioni. The blurring of imagined and reality never overwhelms, and the machinations of the mystery play out much like later giallo.

Star Peter Baldwin had, to say the least, a schizophrenic career. He began as a contract player at Paramount, appearing in such films as Stalag 17 (1953), but by the end of the decade he was supporting programmers like I Married a Monster from Outer Space and The Space Children, and not major parts even in those. He had better luck in Italy, where he spent another dozen or so years, but then returned to the U.S. and somehow established himself as a director of TV sitcoms, notably The Brady Bunch, Sanford and Son and, later, Benson. He also directed TV fare like The Brady Girls Get Married and the terrible The Harlem Globetrotters on Gilligan's Island (both 1981) along with a few features including Meet Wally Sparks (1997) with Rodney Dangerfield. Baldwin died in 2017 at the age of 86. Looking at him in The Possessed most of these credits are unimaginable, for his performance is fully committed, he's handsome in a way pleasing to both American and European audiences, and he's obviously a very good actor.

The Fifth Cord (the much better Italian title: Giornata near per l'ariente, "Black Day for the Ram," 1971) stars Franco Nero as Andrea Bild, an alcoholic newspaper reporter attending a New Year's party with various friends and acquaintances including Helene (Silvia Monti), a former lover. One of the guests, John (Maurizio Bonuglia), is attacked in a tunnel on his way home. The next morning Andrea, learning of the attack, decides to investigate, figuring there may be a story in there somewhere. Soon after, other guests from the New Year's party are brutally murdered, with evidence increasingly incriminating Andrea, though even the police detectives on the case are skeptical about this.

The Fifth Cord begins well, it's opening scenes working within familiar genre conventions: Who among those at the party is the serial killer? Very quickly, however, the script becomes frustratingly convoluted and confusing; while I was able to guess the killer's identity easily, by the end I also didn't care very much.

Conversely, other aspects of the film held my interest throughout, most especially the gorgeous cinematography by Vittorio Storaro (Last Tango in Paris, Apocalypse Now, One from the Heart, Dick Tracy) which is almost aggressively inventive in every scene. Complementing Storaro's work is director Luigi Bazzoni's use of locations, especially the contrast of traditional and modern Italian architecture. Indeed, watching the film I was struck by how even functional buildings like hospitals and hotels had striking, original designs, while personal dwellings like the ultra-modern house where Andrea's ex-girlfriend lives all have a fascinating, distinctive look, this one with a suspended fireplace in the cavernous main room with its slanted ceiling and big picture windows. Further, in most spaces the art direction -- the furnishings, table and floor lamps -- are interesting all by themselves, with the overall look of the film had me mourning the dominance of utilitarian architecture and limiting IKEA-type furnishings we're used to today.

Further offsetting the film's script problems is the revealing (to say the least) appearance of the late American actress Pamela Tiffin (Billy Wilder's One, Two, Three) as Andrea's current girlfriend, another suspect in the crimes. The giallo genre is known for its use of gorgeous women, even generating its own stars (such as luscious Edwige Fenech), and in The Fifth Cord Tiffin holds her own both as an actress and in the looks department.

The Pyjama Girl Case (La ragazza dal pigiama giallo or, "The Girl in the Yellow Pyjamas") is by a wide margin the weakest of the three films, though its unusualness is intriguing. Suggested by a real-life Australian murder case from 1934, the film stars Ray Milland, sans toupee, as Thompson, an unhappily retired police detective allowed to work a murder case parallel with the official investigation. A young woman's body is found on a Sydney beach, her face burned beyond recognition, her identity unknown. The other detectives soon close in on a suspect, but Thompson identifies serious holes in their theories, exploring other avenues.

(Mild spoilers) Seemingly disconnected plot elements is common in many giallo, but here the structure is badly miscalculated. It's not until late in the film that Glenda's story, edited in such a way that the audience assumes they're events are occurring simultaneous with the murder investigation, are actually taking place several weeks in the past. The filmmakers seemed to think this too-late reveal would surprise and impress audiences, but the gimmick doesn't please, only frustrates. The payoff to all this somewhat makes up for what amounts to a major cheat, though like much of the film, it deviates sharply, not for better, from the genre's tropes.

Flavio Mogherini's direction and screenplay (with Rafael Sanchez Campoy) are mostly uninteresting but with several striking, if illogical and sometimes grating touches. In an attempt to have the "Jane Doe" victim identified, it's decided to put her naked corpse on public display, under glass as it were, the victim posed lying on her side. Throngs of people stop to gape: old women faint, perverts smack their moist lips in delight, teenagers dare themselves to stop and stare. Mogherini's camera views the melee mostly from behind, artfully showing the victim's backside. The images have a kind of creepy beauty, though the idea of displaying a murder victim for public consumption in this way is, of course, patently absurd.

The Australian locations are moderately interesting, though not so much it would have made much difference had the whole picture been shot in Italy. Milland and Di Lazzaro are both good, though it's a little dispiriting to see the Hollywood veteran associated with the picture's sleazier aspects, including a masturbation scene and highway-stop group sex scene that's singularly unpleasant. Also unpleasant is Riz Ortolani's musical score. I often like his film music but here his work is like something one expects over distorted speakers at a roller-rink. The music is often at odds with what's happening onscreen, and the cues begin and end at awkward, inappropriate moments. Adding to the distractions are two out-of-nowhere songs by deep-voiced transgender icon Amanda Lear.

All three titles were shot for 1.85:1 widescreen, Italy's standard for non-‘scope productions. The transfers, all new 2K transfers from original camera negatives, are outstanding, with super-sharp images strong color on the last two and singularly crisp black-and-white on Possessed. The Dolby Digital/LPCM and DTS-HD 1.0 mono is strong throughout as well, each film offered in both Italian and English with optional English subtitles. (I opted for English throughout, as actors including Franco Nero, Pamela Tiffin, Ray Milland, and Mel Ferrer, among others, all dub their own voices on the English tracks.)

Each disc, packaged separately, is crammed with supplements. On Possessed: a new audio commentary by Tim Lucas; an appreciation by critic Richard Dyer; interviews with makeup artist Giannetto De Rossi, art director Dante Ferretti, and actor-director Francesco Barill (friend of the film's co-directors), and a trailer. On The Fifth Cord: a new audio commentary by Travis Crawford; a video essay about the use of architecture by Rachel Nisbet; interviews with author-critic Michael Mackenzie, star Franco Nero, and editor Eugenio Alabiso; a deleted sequence, restored from the original negative; trailers and an image gallery. On The Pyjama Girl Case: a new audio commentary by Troy Howarth; interviews with Mackenzie, actor Howard Ross, editor Alberto Tagliavia, and an archival interview with composer Riz Ortolani; an image gallery and trailer.

While the three films selected as Giallo Essentials are hardly representative, and not really the best introduction to the genre, Arrow Video's transfers and extra features are so definitive the set is a must for genre fans. A DVD Talk Collectors Series title.