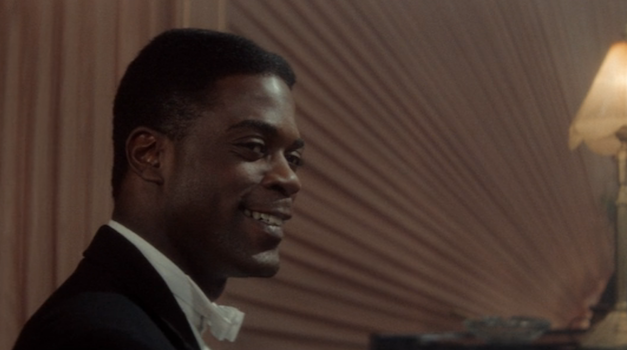 E.L. Doctorow's classic novel of early 20th Century New York, Ragtime, is famously a patchwork of numerous different story threads, many featuring historical figures. Robert Altman was an early candidate to direct a film version of the novel, and one envisions that he might have tried to include as much of the patchwork feeling from the book as he could. Instead, director Milos Forman and his Hair screenwriter Michael Weller fashion their 1981 take on the novel into a more focused, if still quite sprawling and lush, film.

The story is anchored around a middle-class family in New Rochelle, twenty-some miles outside the city. The family members are good and decent, in a nondescript way, which maybe explains why Doctorow never gave them names. Square-jawed Father (James Olson) is hesitant when compassionate Mother (Mary Steenburgen) takes in a young black woman, Sarah (Debbie Allen), who gave birth in their garden in an act of desperation. Steenburgen plays Mother with quiet but unmistakable moral conviction, while Olson perfectly realizes Father as an imperfect liberal who values propriety more than justice.

Soon, the baby's father, a traveling piano player named Coalhouse Walker, Jr. (Howard E. Rollins, Jr.), arrives to marry Sarah and create a home for the baby. Before he can, he is harassed by some of New Rochelle's volunteer firemen, led by Dune's Kenneth McMillan. They smear feces on the seat of Coalhouse's new Model T Ford and feign ignorance when the authorities come around. To people like Father or the patrolman played by Jeff Daniels that Coalhouse initially asks for help, it's minor damage to some property -- clean it up and get over it. But to Coalhouse, this is about self-respect. And the character's search for justice leads him to radical -- and violent -- ends.

This story thread, inspired by Heinrich von Kleist's 19th Century novella Michael Kohlhaas, is both the most dynamic part of the film and clearly the material that is dearest to Milos Forman's anti-authoritarian heart. It comes as no surprise that later, the film becomes almost entirely consumed by a stand-off between Coalhouse's gang of working-class radicals and the New York City police force, led by an 80-year-old James Cagney in the role of police commissioner Rhinelander Waldo. This section offers not only the pleasure of seeing Cagney delivering a last great big-screen performance, it also offers early glimpses of Samuel L. Jackson and Frankie Faison as Coalhouse's collaborators. The Killing Floor's Moses Gunn gets a great scene as Booker T. Washington, who is sent to talk Coalhouse out of his plan and ends up delivering a hell of a guilt trip.

Ragtime's other stories ricochet off of the central family and off of each other. Brad Dourif, as Younger Brother, becomes infatuated with celebrated beauty Evelyn Nesbit (Elizabeth McGovern), whose jealous young husband (Robert Joy) kills architect Stanford White (Norman Mailer) after the old man adorns a building with a nude statue that greatly resembles Evelyn. The ensuing trial is a media spectacle of the kind guaranteed to make Evelyn an even bigger star. The film is so overstuffed that sadly it only sprays diluted venom at the vapidity of celebrity culture, stranding McGovern with a half-baked satirical character she nonetheless does her damnedest with.

The remaining largest story thread is an elliptical rags-to-riches yarn featuring Mandy Patinkin as a poor Jew who goes from selling paper silhouettes on the streets of the Lower East Side to making a mint as a pioneering film producer under the name "Baron Ashkenazi" (a riff on "King Vidor?"). Like a lot of folks in this film, Patinkin doesn't get much screen time but he makes the most of what he gets. His character is tender toward his young daughter while bursting with anger and violence toward others; Patinkin pulls off these shifts smoothly without reducing the role to a shouting caricature.

Ragtime is filled to the brim with great performances, but Howard E. Rollins, Jr., really is the beating heart of the film. He's charming, funny, and a bit dandy-ish, but as soon as Coalhouse starts his crusade for self-respect and justice, we're on his side. Even when the character resorts to violence, we see the severity of the pain and trauma that spurs his actions. Weller's script gives Rollins a potentially hokey Oscar-bait soliloquy, in which Coalhouse prays and laments, "I'd hoped you'd reveal to me along the way why you put such a rage in my heart." Rollins not only sells the speech but invests it with layers of conflicting emotions: self-awareness, confusion, world-weariness, and idealistic faith.

In addition to the cast I've named, there are plenty of great appearances from character actors of many generations, including Donald O'Connor, Pat O'Brien, Fran Drescher, Richard Griffiths, Bessie Love, Michael Jeter, and John Ratzenberger.

While Ragtime suffers from being not enough and too much at the same time -- Doctorow's original vision of a more faithful multi-episode adaptation of his novel was only three or four decades too early for Hollywood -- this film combines the same scale of epic period filmmaking and idiosyncratic characterization that would make Amadeus a critics' and awards' darling a few years later. Robert Altman's Ragtime would certainly have been different, but Forman's Ragtime is bold and entertaining in ways that are wholly this filmmaker's own.

The Blu-ray
Ragtime is spine #28 in the Paramount Presents series. The standard keepcase has a glossy cardboard slipcover that opens to reveal the theatrical poster design. A Digital HD code is included.

The Video:
Most of these Paramount Presents discs are notable for sterling new transfers, and this AVC-encoded 1080p 2.39:1 transfer is no different. Especially with the workprint version (see below) available to do an A/B comparison, this has a particularly rich, detailed, and nuanced quality that is textured, film-like, and satisfying. Just great.

The Audio:
The disc offers a Dolby TrueHD 5.1 surround mix. Pretty front-heavy, which is unsurprising considering the original mono mix, but with some notable moments of ambience. Dialogue is always crisp and clear. Randy Newman's score is well-supported and drives the film effectively. Two subtitle options: English and English SDH.

Special Features:
All special features -- including the commentary -- have English subtitles options.


Final Thoughts:
Another excellent entry in the Paramount Presents Blu-ray line. An impressive restoration coupled with a great collection of extras -- some old and some new. The film itself is a bold and entertaining effort from director Milos Forman that shares a sense of the "intimate epic" with his Oscar-winning Amadeus. Highly Recommended.