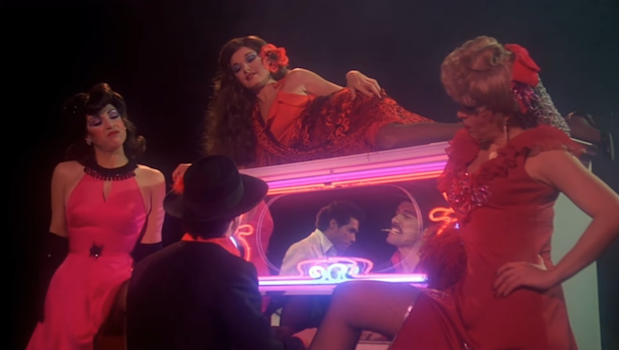 The promo stills accompanying this review do not reflect the Blu-ray's picture quality.

The 1981 film Zoot Suit spins a stylized, music-infused take on the Sleepy Lagoon murder and the miscarriage of justice that ensued in its wake. It was 1942 Los Angeles -- the same paranoiacally racist era in which Japanese-Americans were being interned in camps -- and the rise in the visibility of young Mexican-American pachucos out on the town in flashy zoot suits was making the white mainstream squirm. The details of the night in question are still unclear, but it is known that different factions clashed during a party near the Sleepy Lagoon reservoir, leaving one man dead. The authorities responded by rounding up hundreds of young Mexican-Americans as suspects and eventually charging nearly two dozen with the murder. Seventeen were convicted.

The film simplifies history by putting just four young men on trial and by largely focusing on Henry Reina (Daniel Valdez), a fictionalized version of the real main suspect Henry Leyvas. The film's vision of Henry is a man who wants to be a part of the American Dream -- leaving behind a life of petty crime and gang fighting to join the navy -- only to have the American Dream bitterly reject him. Henry is counseled throughout the film by El Pachuco, a red-and-black-bedecked fantasy zoot-suiter played by Edward James Olmos at his most beautiful and badass. El Pachuco is both the film's Greek chorus and a physical embodiment of the part of Henry Reina's head that is constantly goading him to "keep it real." It would be tempting to peg El Pachuco as the devil on Henry's shoulder, but the truth is more nuanced. It's more like El Pachuco is the part of Henry's Chicano identity that he might be tempted to tamp down and eschew for acceptance but which ultimately refuses to be cast aside. Daniel Valdez (who also co-composed the songs in the film) is a naturally sympathetic actor and he keeps Henry's emotional struggle relatable, even when the film gets philosophical or intensely stylized.

Writer-director Luis Valdez (La Bamba) originally conceived Zoot Suit as a semi-musical play, and the film is "set" at a performance of the play at L.A.'s Aquarius Theater (originally the Earl Carroll Theatre). This approach has its roots in Universal's initial proposal to shoot the play on stage with a cheap three-camera set-up -- something akin to that recent Hamilton film that debuted on Disney+ during the first summer of the pandemic. Valdez, however, went for something more akin to Ingmar Bergman's stage-bound film of The Magic Flute, floating in and out of moments that could only make sense in cinema while maintaining the setting of the theater and using the crowd of theater spectators as a dramatic device. I've read a handful of skeptical reviews from critics that were put off by this Brechtian experimentation with the film's proscenium arch, but Valdez is too confident in his conception and blocking to be mistaken for someone resorting to gimmicks.

Valdez's dialogue is a slangy mix of English and Spanish, which feels less like a concession to naturalism than an attempt to situate Zoot Suit in a specific milieu with its own customs and passwords. In the film's second half, Cagney and Lacey's Tyne Daly enters the story as a Jewish lefty activist who is working to get Henry and his friends released from prison. Daly's character understands she has to talk the talk as well as walk the walk, and even though words like "ese" and "vato" sound a bit goofy coming out of her mouth, Henry is clearly charmed by the effort. Daly invests her performance with the right blend of sass and sensitivity, and she ends up giving the second-most scene-stealing performance in the film behind Olmos.

The film is stacked full of Latino character actors who would become familiar faces in the next few decades -- which is both a testament to their talent and to Hollywood's lack of imagination in casting non-white performers -- including Lupe Ontiveros, Abel Franco, Marco Rodriguez, and Tony Plana. Other notable actors who have their own "hey, it's that guy" moments are Kurtwood Smith, of Robocop and That '70s Show fame, and Grease's Dennis Stewart.

Zoot Suit was recently added to the Library of Congress's National Film Registry, but it seems to have a fairly muted legacy in cinephile circles. Hopefully, this new release will spark more interest in this bold and brilliant masterpiece. 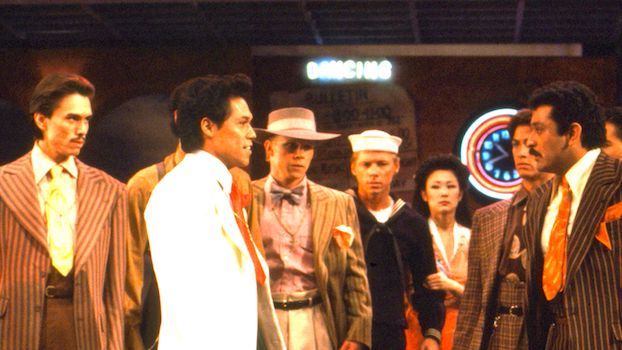 The Blu-ray
Zoot Suit is packaged with two-sided art and a cardboard slipcover.

The Video:
The AVC-encoded 1080p 1.85:1 presentation is sourced from an old master but holds up pretty well nonetheless. Kino has afforded a healthy encoding bitrate, so no noticeable compression issues. There is good depth and clarity, and the bright colors of the production are saturated and pleasing.

The Audio:
Music and dialogue are very well-supported in the DTS-HD 2.0 mono audio mix. Some inconsistencies with moments of ADR, but that is clearly part of the original production. An English SDH track is included that also subtitles the Spanish phrases. Some flubs here and there, and I presume that the subtitles are sourced from an old, poorly reformatted closed captioning file because often multiple characters' dialogue will be mashed into one long subtitle. Still, if you have your wits about you, it's fairly easy to parse.

- Frequent Kino commentator Kremer talks about the background of the original play and the film. He's a big fan and clearly enjoys digging deep into the production.

Final Thoughts:
A vibrant and stylish look at a pivotal moment in the history of Los Angeles, the Chicano movement, and the U.S. justice system. This idiosyncratic mix of docudrama, song and dance, and unabashed theatricality is an underseen masterpiece. Kino Lorber's thoughtful supplements help frame it appropriately but it sure would have been nice if Universal had sprung for a fresh transfer. Still, this release is Highly Recommended. 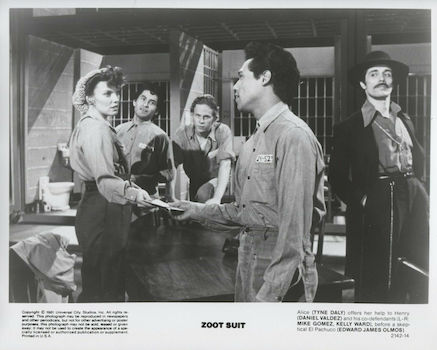