In 1934 child-star Shirley Temple's movie career was in the early stages of its meteoric rise. She gets third billing in Now and Forever after Gary Cooper and Carole Lombard, they also on the ascent. Neither of them made the list of top box-office attractions that year, but Temple placed seventh. By 1935 she was an international sensation, Hollywood's biggest star, a position she held onto for the next several years.

Temple was under long-term contract at Fox, soon to merge with Twentieth Century Pictures, but for Now and Forever she was loaned out to Paramount. The studio wouldn't loan her out again until 1941.

Now and Forever is a particularly interesting Shirley Temple vehicle, similar to the Fox films but notably darker in tone. A particularly grim conclusion was planned and even screened for critics before the studio changed their minds, reshooting and softening up the ending, though overall it's still darker and apparently disliked by Temple's still-extant fanbase. Unabashedly sentimental in the good sense of the term, the picture is well-made and, nearly 90 years on, still powerful. 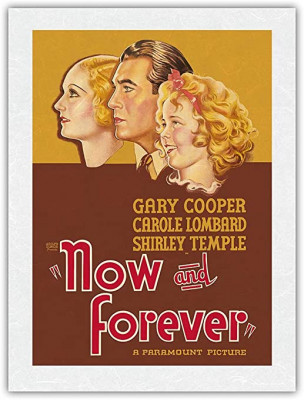 Handsome, carefree confidence man Jerry Day (Gary Cooper) travels the world with second wife Toni (Carole Lombard), their first-class accommodations financed by Jerry's swindling of the idle rich. Toni goes along with Jerry's con games until, while living it up in Shanghai, he eyes a bigger score: selling the custody rights to his five-year-old daughter from his first marriage, his late wife's rich family having no use for irresponsible Jerry. Jerry excitedly tells Toni that he expects to gain $75,000 from the deal, but she is shocked he would do this to his own kid, and leaves for Paris without him.

Returning to America, Jerry is quite taken with Penny (Shirley Temple), so much so that he refuses their early cash offers, deciding instead to raise her himself while continuing his freewheeling, criminal activities. This includes selling a fake gold mine to dapper Felix Evans (Sir Guy Standing), later revealed as a gentleman thief himself. Toni, helplessly in love with Jerry, returns but insists he give up the confidence game and raise Penny properly, but money troubles and Felix's blackmailing soon pull Jerry back into a scheme threatening not only his liberty but his entire relationship with Penny.

Child actors have widely varying degrees of skill independent of their popularity, but precious few could be really considered good actors. A rare exception, for instance, is Jodie Foster: watch her earliest performances and marvel at her uncanny ability, adult-level chops while still a child. Foster, of course, became a superb adult actor which Temple did not, but Temple was far ahead of the pack at a much earlier age. Many remember this icon for her precocious singing and dancing (e.g., "On the Good Ship Lollypop"), but what really impresses is that this kid really can act, a six-year-old not playing out a situation or parroting lines fed her by an off-camera coach. Rather, she's really giving a carefully-considered, fully-dimensional performance. Reportedly, she not only dutifully memorized her own lines but those of her co-stars, too. She's quite the marvel, very impressive even now.

As with most of her Fox films, Temple's role here is as healer, creating and/or reconnecting a family unit is moral disarray. Now and Forever is unexpectedly adult in fashioning Jerry as both appealing and reprehensible at once. Cooper, whose screen persona soon solidified playing decent, common man types, is both good and a little jarring to watch; his ne'er-do-well is charming and dislikable at once, something one doesn't expect from Coop.

Toni is shocked by his amoral attitude, selling off his own flesh and blood to finance his carefree lifestyle and avoid regular work. It's a bridge too far for Toni, but clueless Jerry can't even begin to comprehend the difference between soaking some rich mark of a couple hundred dollars and selling off all rights to one's own child. If this had been made at, say, MGM, Jerry would not only have been won over by Penny's sweetness, he would have immediately resolved to go straight. Not here. Jerry enjoys Penny's company, but not so much that he'll seriously consider giving up the con game. He thinks he can do both simultaneously.

Watching her father ply his trade without really understanding it, Penny trades a handful of "gold" rocks for a pair of roller skates, and only then does Jerry begin to perceive the power he has to influence this adoring daughter who loves her father and could never believe he would ever tell a lie. That's raw but powerful stuff; it may be horribly manipulative and melodramatic on one level, but it connects directly to any parent who's ever disappointed their child and betrays their uncorrupted trust in the goodness of people.

Such stories are where Temple excelled; it did not matter that nearly all her childhood films play on this same theme. It works. In spades. Ever since, Hollywood filmmakers make the mistake of trying to fashion other child performers in Temple's image, sometimes curls and all, but Temple was the real article. She may be the best-ever child performer in that age range, but she had that other quality of being genuine. That you cannot fake.

Licensed from Universal, Now and Forever looks very good on Blu-ray, the 1.37:1 standard frame, black-and-white image, reportedly a new 2K master, is not razor-sharp, but then again that slight softness was also Paramount house style at the time. The DTS-HD Master Audio (2.0 mono) is is fine, and optional English subtitles accompany this region "A" release.

A trailer is included, along with an audio commentary by prolific Lee Gambin along with costume historian Elissa Rose. Some may find this track worthwhile, but I confess to finding Gambin's style meandering and less fine-tuned than I prefer.

Back when I was a kid (and dinosaurs roamed the plains) Shirley Temple movies were shown every Sunday morning and, even then, I found many of them compelling. But it was not until much later, as a middle-aged adult, I looked at them again and truly appreciated Shirley Temple's amazing talent. When you watch Now and Forever try to remind yourself that she was barely six years old. Highly Recommended.