I don't have that much to report about Howard Hawks' late-career comedy Man's Favorite Sport? (1964). In this case, the consensus is correct: Hawks's reworking of 1930s screwball comedy classics, of which he was a major contributor, is pleasant enough with some big laughs here and there, but over it's one of his lesser comedies, though better than some others (e.g., 1952's Monkey Business). Rock Hudson and Paula Prentiss ably fill the screwbally shoes of past genre stars, though Rock's part all too clearly was written for Cary Grant (who opted to make Charade instead, a wise decision) and the picture is overlong at 120 minutes. (Hawks's preferred cut was even longer, about 135 minutes; it doesn't appear to survive.)

Still, it's not a bad way to spend two hours. I'd seen nearly all of Hawks's sound films and most of Hudson's starring films, but somehow I had missed this one through the years. I laughed out loud a couple of times, admired the cleverness of some of the dialogue, a couple of original scenes amidst all the derivative ones, and especially Prentiss's sexy, original take on a Katharine Hepburn/Bringing Up Baby character, the same screwball type also later played by Barbra Streisand in What's Up, Doc? (1973). 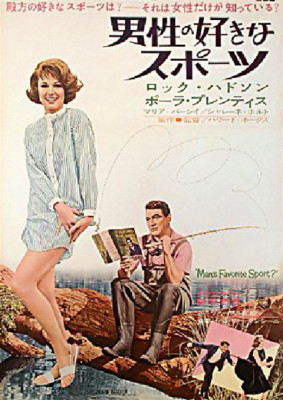 Roger Willoughby (Hudson), is a valued salesman at Abercrombie & Fitch, the elite outfitter of sporting goods, with Roger unusually deft at selling fishing equipment to San Francisco's wealthiest customers. Roger's even written a book about the sport, and customers like Major Phipps (Roscoe Karns, in his last film role) rely on Roger for advice.

Secretly, however, Roger hasn't fished a day in his life. He hates the water, dislikes the taste of fish and particularly disgusted by the notion of actually touching them. This presents a problem when his boss, Cadwalader (John McGiver), signs up Roger as a competitor at a big annual fishing tournament at Lake Wakapoogee, made at the request of Abigail "Abby" Page (Prentiss), public relations director of the big lodge there; and "Easy" Mueller (Maria Perschy), daughter of the lodge owner.

At the heart of things is a screwball comedy mainstay: a mild-mannered man helpless when an eccentric woman (who always has designs on him early in the story) completely upends his daily routine, threatens his job and almost always his engagement to a more conventional woman. The man repeatedly tries and fails to maintain his dignity throughout, which in some ways plays to Rock Hudson's strengths. He was at his best, in both comedies and dramas, underplaying a calm, deliberate demeanor in this case sorely tested by Paul Prentiss's goofiness. She's also well-cast. Uniquely eccentric, Prentiss is pretty but not gorgeous yet her unusual speaking voice and unpredictable manner somehow results in a recipe for incredible sexiness. Hawks clearly recognized this from the start and let her run wild, even though, according to the director, Prentiss seemed oblivious to continuity issues from one shot to the next.

Many of the film's comic set-pieces remake or rework moments from ‘30s screwball titles, and Man's Favorite Sport amps this up with, at times, a visual approach and broadness approaching the level of a one-reel cartoon. The fishing scenes, for instance, have bright and colorful but decidedly unreal underwater photography, shot almost like a Warner Bros. cartoon. In one scene particularly, Roger wearing an experimental self-inflating life preserver that inflates unexpectedly, is like something from one of those sports-themed "Goofy" cartoons, though undeniably funny.

Abercrombie & Finch's advertising was notoriously risqué during this period, the Victoria's Secret of its day, and Hawks films of all genres had suggestive sexual content with strong, assertive women that he somehow got past the Production Code. In Man's Favorite Sport? there's a very amusing outdoor scene with Roger, Abby, and Easy chatting in a forest when a downpour starts. The heavy rain makes the women's clothes translucent, with Roger becoming increasingly alarmed as the women are gradually soaked, revealing all. Hawks's camera shows only the women's backs, but it's clear Roger sees everything from his perspective. It's an original moment in a movie too dependent on recycled screwball material.

The screenplay was written by John Fenton Murray and Steve McNeil, primarily television scribes, though it captures the essence of the genre's distinctive dialogue, which Hawks comedies helped shape. Unlike Hawks's next movie, the undernourished Red Line 7000 (1965), Man's Favorite Sport? is a glossy A-picture, with great outdoor photography by Western veteran Russell Harlan, a good (if rather unmemorable) score by Henry Mancini, and amusing opening titles.

Licensed from Universal and presented in 1.85:1 widescreen, Man's Favorite Sport? looks great on Blu-ray, with appropriately bright primary colors and a sharp image throughout with no signs of age-related wear. The DTS-HD Master Audio (2.0) is clean and clear, and supported by optional English subtitles on this region "A" encoded release.

This title offers an unusually good audio commentary with film historian Michael Schlesinger with additional remarks by star Paula Prentiss and her husband (since 1961), actor-director Richard Benjamin. Schlesinger is one of the best audio commentators around, and this is a predictably great track. A trailer is also included.

Man's Favorite Sport? is good, not great Howard Hawks, with scattered laughs throughout even though it doesn't quite hit the bullseye. Still, Highly Recommended.