Love Slaves of the Amazons

When the impetus driving the production of a movie is leftover film stock, it's unlikely the resulting work will rival Citizen Kane. The story goes that after making Curucu, Beast of the Amazon (1956), hardly cinematic gold itself, producer-writer-director Curt Siodmak found himself with 10,000 feet of unused color film stock, and built Love Slaves of the Amazons around this unexpected surplus. Under those circumstances, and with a title like that, mediocrity would seem inevitable, and so it is.

It's odd that Kino would release Love Slaves and not Curucu, at least not yet. That film is reportedly one of the great disappointments of 1950s fantasy cinema, with its notorious cop-out dénouement. Still, one imagines a die-hard if tiny audience for Curucu and a virtually nonexistent one for Love Slaves, though the movie is not without interest. It's visually colorful here and there, has camp value in its frequent awfulness, plus it has the unusualness of being shot entirely in Brazil, a location rarely visited by ‘50s Hollywood movies. And though a tired, cliché-ridden jungle adventure, it's not nearly as dull as I expected it to be. 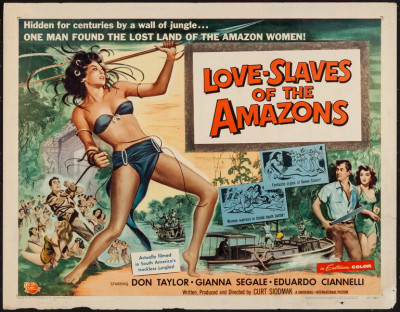 Flying into Manaus, Brazil, archeologist Pete Masters (Don Taylor) is immediately approached, almost accosted, by local eccentric Crespi (Eduardo Ciannelli), an alcoholic with wild tales of having visited a hidden jungle kingdom of Amazonian women, where gold and diamonds are as commonplace as pebbles, so he says. Crespi wants $5,000 to finance a new expedition, but Pete is merely amused by the old man's ravings.

Crespi turns up again at the archeology institute office of Adhemar Silva (Harvey Chalk), finally convincing Pete that there may be something to his story when Crespi shows them an unusual statue made of solid 24-carat gold. Soon Pete and Crespi set sail up the Amazon, but are overrun by river pirates led by brothers Fernando and Carlos, who take command. Later, they claim Crespi masterminded the ambush in order to keep the location of the Amazon tribe a secret, a curious and unmotivated plot point that leads nowhere and effectively goes unresolved. In any case, Pete and Crespi jump overboard, the two soon separated when Pete develops malaria, wanders of, and is captured by the Amazonian women, who take Pete back to their village. At the village, Pete meets other, earlier explorers long held captive there, including Mario Delano (Tom Payne) and botanist Gina Vanni (Gianna Segale).

Cantankerous Curt Siodmak (1902-2000) was the lesser-talented younger brother of Robert Siodmak. Born to Jewish parents, they began their film careers in Germany, moved to other parts of Europe with the rise of Hitler and the Nazis, both eventually ending up in Hollywood. Robert flourished in ‘30s French cinema, made several outstanding film noir pictures in Hollywood during the ‘40s, then returned to Europe in the 1950s where he continued a long run of good pictures. The recent Kino release of The Devil Strikes at Night (1957) is a good example of Robert Siodmak in his prime.

Brother Curt, on the other hand, seemed fated to live in his brother's shadow. He wrote several novels turned into famous movies, including F.P.1 Doesn't Answer, The Beast with Five Fingers, and especially Donavan's Brain, and he wrote the screenplay for The Wolf Man (1941). Mostly, though, Curt Siodmak churned out program pictures when they weren't outright schlock. Ironically, his worst scripts tended to be for the handful of pictures that he also directed and sometimes produced, as here. The Magnetic Monster (1953) is by far the best of these while there are several candidates for Siodmak's worst, with my money riding on Bride of the Gorilla (1951), his directorial debut.

To its credit, Love Slaves of the Amazon is fairly watchable, though its weary jungle adventure tropes add nothing to the genre, which had worn out and then some by 1957. The long-running Tarzan series had declined dramatically (before being revitalized in 1959); the "Jungle Jim" and "Bomba, the Jungle Boy" films had ended, and only the cheapest indie jungle films (such as Monster from Green Hell, 1958) were still being produced.

Love Slaves has the advantage of being filmed in a far-flung location, which Siodmak and second unit director-editor and co-producer Terry Morse (late of Godzilla, King of the Monsters!) use fairly well. Oddly, the overall visual style of the film less resembles 1950s Hollywood movies made outside of North America than it does the kind of cheap, Harry Alan Towers-type cobbled-together international co-productions made a decade later. The Amazonians lair, built in the studio, is elaborate if gaudy, somewhat like the sets in Fritz Lang's The Tiger of Eschnapur/The Indian Tomb (1959).

Clearly written in great haste, the film's wildly inconsistent tone frustrates. The first-half of the picture is relatively serious, though the behavior of both Pete and Crespi is, to put it mildly, inconsistent. Crespi, for instance, alternates between harmless local "character," devious and maybe dangerous mystery man, pathetic drunk, and paranoid loon. Don Taylor, later a busy if undistinguished TV and movie director, seems to be taking the outrageous story seriously in the first half of the picture, but after being captured by the Amazonian women adopts an uncaring, smirking attitude, mugging as if he were guesting on some outrageous sitcom.

Further undermining credibility is the fact that all the male roles other than those played by Taylor and Ciannelli are dubbed by voice actor Paul Frees. Frees does at least a dozen voices, and while his versatility is undeniably impressive -- he could have created a demo reel from this film alone -- they all have the same Freesian style and instantly recognizable to anyone familiar with his work.

The Amazonian women are a disappointment. When they first capture Pete, the women, all of ordinary height, are dressed in green (anachronistic white brassieres are frequently visible through these garments) and they wear green face and body makeup. Apparently, this allows them to traipse through the jungle camouflaged but also makes them look like daughters of the Jolly Green Giant. At the village, Pete is given a compulsory bath by Amazons that looks like ordinary, plump, middle-aged housewives, certainly not the exotic beauties audiences expected from Reynold Brown's terrific poster art. At one point, Pete hallucinates (or something) as the more attractive women engage in a Las Vegas-style dance number, the only time the women wear revealing costumes, though these costumes are quite racy for a mainstream 1957 Hollywood release. (Also unusual: several of these scantily-clad dancers, decked out like the Brazilian samba revue Oba Oba, are black.) Also lending a bit of local flavor is the exotica-style vocals of Yara Lex (billed as Jara Lex in the credits). rn

Licensed to Kino Lorber by Universal, Love Slaves of the Amazons is presented in 2.00:1 widescreen. Given the nature of shooting and processing all the film stock in Brazil, the film looks pretty good if consistent, with some footage bright with primary colors and razor-sharp while some shots are grainier and less vibrant. Still, overall, it's a good transfer. The DTS-HD Master Audio (mono) is decent enough, and optional English subtitles are provided on this region "A" release.

The lone extra is an audio commentary track by entertainment journalists Bryan Reesman and Max Evry. Though peppered with some interesting information and observations here and there, the jokey and casual style of the track, even on a picture as generally bad as Love Slaves is not this reviewer's cup of tea, even one where its commentators "Sherlock Holmesed the shit out of it," as they put it.

Only the most tolerant fans of outré cinema would want to sit through Love Slaves of the Amazons. Though not without interest, this one's a Rent It.