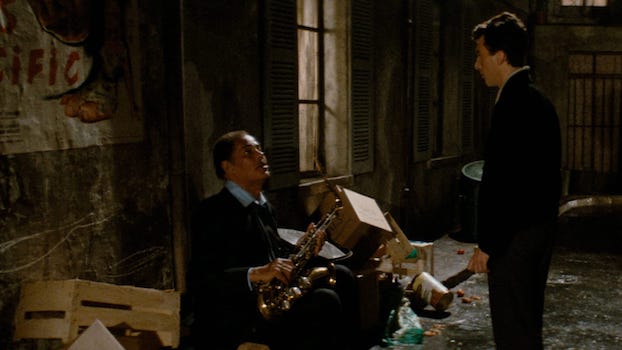 Bertrand Tavernier's 1986 film 'Round Midnight is one of the best movies set in the world of jazz music. Legendary tenor saxophonist Dexter Gordon plays a fictional amalgam of Lester Young and Bud Powell, in a loosely told story inspired by the journals of illustrator Francis Paudras. Paudras was a Parisian jazz fanatic who helped keep pianist Bud Powell afloat in the late '50s, financially and spiritually.

Dexter Gordon so fully embodies his character, called Dale Turner in the film, that numerous reviews over the years assume that Gordon's Oscar-nominated performance here is just the jazzman playing himself in a 1950s context. As the interviews on the Blu-ray make abundantly clear, Gordon does a seamless job of embodying the physicality and speech habits of his real-life models. For example, Dale's verbal tics -- nicknaming everyone "Lady," speaking about himself in the third person, calling people "half a motherfucker" when he gets ornery -- are all snagged from Lester Young.

At the beginning of the film, Dale leaves his squalid living situation in New York to take a gig in Paris. The living situation in "gay Par-ee" is only relatively better, as his booking agent Buttercup (Sandra Reaves-Phillips) keeps Dale locked in his room to make sure he doesn't get drunk and miss the gig. Buttercup takes all his earnings too -- for his own good, supposedly.

To be fair, Dale does have a habit of sneaking off to get drunk. In fact, his first interaction with Francis (François Cluzet), his future benefactor, occurs on the street when Dale is looking for someone to buy him a beer. Francis is so enamored of Dale's artistry, and so saddened by the state of his personal life, that Francis offers Dale a place to stay, with him and his daughter (Gabrielle Haker). The hope is that Dale can regain a bit of independence and his creative spirit.

Tavernier's story, co-written by David Rayfiel (Death Watch, Three Days of the Condor), is almost a setting that the director uses to inform the mood and performances. These areas are clearly where he is most interested. Considering the musicians he has assembled, it's hard to fault him for mostly just wanting to see and hear them play. The film's original music composer Herbie Hancock also appears in a supporting role; he acts as the onscreen musical director for a variety of combos that feature a who's who of post-bop/hard bop giants like Wayne Shorter, Bobby Hutcherson, Freddie Hubbard, Ron Carter, John McLaughlin, Billy Higgins, Cedar Walton, and Tony Williams. Hutcherson also has some charming scenes where he is constantly trying to feed the other musicians with dishes he has cooked in his hotel room.

Lonette McKee appears in a few wistful scenes as a singer whose affection for Dale never flourished into an actual romance. Martin Scorsese appears late in the film as a motormouthed New York club owner who pays to bring Dale back from Paris, with predictably dire results. (As Dale comments to Francis, who also makes the trip: "S.O.S. Same old shit.")

Considering the spareness of its elliptical narrative, it's not terribly surprising that 'Round Midnight feels overlong at 131 minutes. There's a part of me that would almost rather see even more music and even less story, but I understand this is a Warner Bros. production and not a freeform indie project, so certain concessions to the commercial marketplace must be made. As it is, 'Round Midnight still feels like a unique, hand-crafted tribute to a once-underappreciated set of artists -- including star Dexter Gordon -- that is as inviting as it is ultimately mournful and sad.

The Blu-ray
'Round Midnight is packaged with a fold-out featuring an essay by Mark Anthony Neal.

The Video:
Sourced from a new 4K restoration, this AVC-encoded 1080p 2.39:1 presentation is another excellent transfer from Criterion and a marked improvement from the old Warner DVD. Colors are rich and lifelike, contrast is nuanced with good shadow detail in the dark nighttime shots. Film grain is well-resolved. No noticeable digital noise or encoding issues.

The Audio:
The disc defaults to the original DTS-HD MA 2.0 stereo mix, but an updated DTS-HD MA 5.1 surround remix is also available. After sampling them both, I stuck to the stereo for its greater focus and stronger prsence. Both are creatively mixed and sound great, though. Two variations on the English subtitles: one track that just translates the French passages and an English SDH track that transcribes all the dialogue and sounds.

(HD, 23:44) - Jazz critic Giddins talks about his long relationship with director Bertrand Tavernier which began with a Giddins' long-winded pan of 'Round Midnight in the Village Voice. He talks about his misgivings about the film but also his appreciation for Dexter Gordon's performance and the idiosyncratic approach that Tavernier applied to all of his films.


Final Thoughts:
'Round Midnight is a lovingly made (and quietly bitter) tribute to the artists who revolutionized jazz music and wound up discarded by society. Criterion's new restoration is sorely needed, injecting life into this unassumingly beautiful movie. The new supplements that Criterion commissioned are outstanding. This is an excellent all-around package. Highly Recommended.