It was one of those strange ripples in movie history. Think of it: Robert Duvall, fresh off the set of Godfather, Part II, joins Randy Quaid, he having recently finished The Last Detail, and John Huston, who had both just directed The Man Who Would Be King and co-starred in Chinatown - all get together to make a Charles Bronson movie. 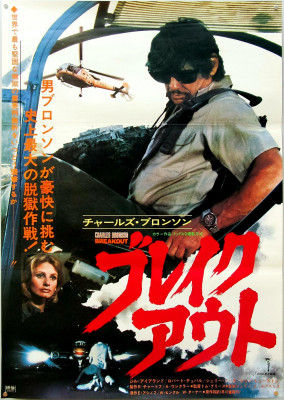 The film was Breakout (1975), produced during Bronson's brief fling as an A-list Hollywood star. He had, of course, been enormously popular in Europe and Japan for nearly ten years but, like contemporary Telly Savalas, Bronson was more familiar than popular back in the states. But his European films developed a loyal following in American grind houses, and when Death Wish (1974) earned a surprising $22 million at the box office (a large take in those days), for the next half-dozen years or so Bronson went mainstream. Most of these movies weren't very good, though, and by the early 1980s, the famously stone-faced actor began a long association with Cannon for a series of cheap, if sometimes stupidly entertaining thrillers. (Supposedly Cannon's budgets for these films were a flat $3.5 million apiece -- of which $3 million went to Bronson.)

Breakout is a concept in search of a story. Jay Wagner (Duvall) is framed for murder by his wealthy grandfather (Huston), and soon Wagner is thrown into a Mexican prison for a crime he didn't commit. Wagner's wife, Ann (Jill Ireland), hires pilot Nick Colton (Bronson) to break her husband out of the slammer.

A gaggle of writers are credited, but no one seems to have decided what tone Breakout should take. On one hand, Bronson and business partner Randy Quaid are like Dumb and Dumber. Neither is very bright; Bronson's Nick is a low-grade con-artist type who amusingly undersells his services to Ireland's moneyed Ann, while Quaid's Hawk Hawkins becomes the patsy of Nick's wild schemes, including sending Hawk into the prison dressed as a Mexican whore. The lighter tone and incredulity of Bronson's character is more in keeping with lighter Clint Eastwood fair like The Gauntlet (1977) than the usual Bronson thriller. Bronson, for his part, seems to enjoy playing what for him was a somewhat atypical character.

However, other parts of the film are played dead straight, with occasional needless unpleasantness. The only Mexicans we see are prison guards who grope and slobber over visiting wives, or are simply sadistic, like prison warden Emilio Fernandez (of Wild Bunch fame). There's both a rape scene and a joke about rape later on. In short, Breakout is not what you would call an ideal date movie.

The picture runs a quick 97 minutes, suggesting perhaps the film was trimmed or retooled partway through post-production. Huston's character disappears completely during the final act, and his relationship with Duvall is never adequately explained. The Big Escape just kind of happens, and much of the action has a cartoon-like air of unreality about it. The death of one key villain is so absurdly grisly that it becomes comical.

What's so weird about Breakout's great cast is that everyone, from Duvall to Huston, are all playing stock Charles Bronson movie characters. You expect to see a lesser-known (though perfectly fine) actor like Paul Koslo playing Duvall's part, or Ben Johnson in Huston's role. Unfortunately, the biggest part other than Bronson's went to Bronson's wife, Jill Ireland. Ireland was never a good actress. She could get away with playing shallow, austere femme fatales (as in the excellent Violent City), but as a guilt-ridden wife obsessed with rescuing her husband, she's hopeless.

All of the above, with a few modifications, was written when I reviewed Breakout twenty years ago (!). Back then I saw it on DVD, on a 55-inch rear-projection system, state-of-the-art at the time, while for this new Blu-ray release I watched it on a 10-feet-wide screen via a projection system. I'd almost completely forgotten the film's plot, so it was almost like seeing it again for the first time and, admittedly, it does play a lot better on a bigger screen and in high-def.

The original review, however, still reflects how I feel about it now. Bronson seems to be enjoying playing a resourceful, charming, but not terribly bright character while Jill Ireland's performance seems even worse now. In high-def Robert Duvall's obvious hairpiece becomes a distraction, and Huston seems to be phoning in his scenes.

The problems with the script persist. In one scene, Duvall's Wagner bribes some guards to smuggle him out of the prison, but warden Fernandez intercepts the escape attempt, with Wagner hidden in a coffin. Fernandez has Wagner buried alive, the innocent man screaming in terror. At this point the film cuts away to other locations for a while, and when the film goes back to the prison Duvall is seen as part of a work detail. What happened? And, as noted above, Huston's villain, Wagner's father, gets away scot-free, seemingly fully capable of having his son murdered or imprisoned once more, especially since none of the characters, least of all Bronson's, are aware he's behind it all.

Breakout is based on a true story about the wrongful imprisonment of Joel Kaplan, nephew of molasses tycoon Jacob Kaplan, who was funneling CIA money to Latin America. This real-life political intrigue is alluded to in Breakout, but so obscured and unresolved (or even explained) in the story that it only adds confusion.

One thing I didn't notice 20 years ago is that all the prison scenes were shot not in Mexico but a continent away at the Fort de Bellegarde in France. Other footage was reportedly filmed in Arizona and California, along with Mexico and possibly even Spain. Tom Gries's direction binds all this material seamlessly.

Kino's all-region Blu-ray of Breakout, filmed in 2.35:1 Panavision, is impressively sharp with only title elements looking on the grainy side. Some of the nighttime scenes especially look digitally color-corrected to my eyes, accurate yet very slightly unnatural at once. The DTS-HD Master Audio mono soundtrack is fine, and optional English subtitles are provided.

Supplements include a trailer, TV spots and a radio ad, along with an enthusiastic and informed audio commentary track by Bronson expert Paul Talbot.

Charles Bronson was a genuinely good actor, though audiences rarely had a chance to see it. His performance in The Great Escape (1963) was the best in a film full of great performances. And he headlined a lot of good movies, too. Besides Violent City, he made a number of interesting films in Europe including the masterpiece Once Upon a Time in the West, Farewell, Friend, Rider in the Rain and others. But after at long last finding stardom in Hollywood films, Bronson's movies were uneven: some good (Death Wish, Hard Times, From Noon Till Three, the unjustly-maligned White Buffalo, Death Hunt), some much less so (Breakheart Pass, Love and Bullets, Caboblanco). Eventually he settled in to a take-the-money-and-run attitude at Cannon, churning out junky exploitation pictures that damaged his legacy. Breakout has its moments, and reasonably entertaining overall, but it also marks the gradual move away from his superior work in late-1960s/early-‘70s Europe. Still, Recommended.