Back to the Beach - Paramount Presents

Back to the Beach (1987) took audiences and critics by surprise. A reunion/sequel/throwback to AIP's "Beach Party" movies of the 1960s, movies starring Annette Funicello and/or Frankie Avalon, this quasi-final series entry's achievements are modest but the fun-factor is undeniable. Director Lyndall Hobbs infuses its unambitious broad satire with several outstanding set pieces. It captures the spirit of the original films while mostly successfully updating it for the 1980s. The original movies were noted for their celebrity cameo appearances, and the cameos in this one are well-chosen and mostly delightful, though best appreciated if the viewer is not aware of them beforehand. 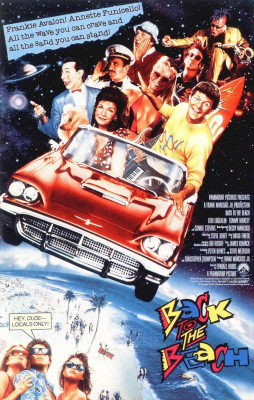 The original series began with Beach Party (1963), gaining steam with up to three per year through 1966, peaking with Beach Blanket Bingo (1965). These pictures were an oddball mishmash of chaste flirtation among the beach bum surfers and bikini-clad beauties, their romances and surfing threatened by obnoxious adults (usually played by former Hollywood stars whose careers were waning) and profoundly stupid Eric von Zipper (Harvey Lembeck) and his motorcycle gang. The latter were the main source of the original films' unfunny broad slapstick, though Lembeck could be quite amusing in small doses.

Frankie and Annette sang, of course, but the real treat were guest musicians like "Little" Stevie Wonder, Dick Dale and his Del Tones, Donna Loren, James Brown, Lesley Gore and others. Comics and comedians as varied as Buster Keaton and Don Rickles became regulars, Keaton particularly providing some honest laughs in his scattered, often disconnected scenes. The series sputtered out quickly, and either Frankie or Annette were largely absent for the later films, though they did team up again for the not-bad Fireball 500 (1966), a stockcar racing melodrama.

The credits to Back to the Beach acknowledges Lou Rusoff, who wrote the original story to Beach Party (though he died before even that first film was released), but Paramount, producers of the film, couldn't afford or refused to pay any money for other rights, hence the absence of film clips, references to other series characters and, most awkwardly, even allowing Avalon to use his own name. In the original films, Annette played a character called "Dee-Dee" and here is simply "Annette." But Frankie Avalon could no longer be "Frankie," so the credits, incredibly, bill him as "Annette's Husband" with no first or last name. She calls him "Honey" while his kids call him "Dad."

In any case, two decades after Annette hung up her mouse ears (on The Mickey Mouse Club, seen in short clips) and Frankie gave up surfing and stopped being a teen idol (singing "Venus," in a snippet from American Bandstand), the couple have moved to Ohio where Frankie owns a car dealership. Annette seems stuck in some kind of June Cleaver time warp, serving nothing but Skippy peanut butter lunches -- a clever reference to Funicello's long-running TV commercials -- to son Bobby (Demian Slade), who dresses like von Zipper. Worse, Frankie has become a stressed-out conservative who has forgotten how to have fun.

En route to Hawaii for a vacation, the family stops in Los Angeles to visit daughter Lori (Lori Loughlin), who's living with boyfriend Michael (Tommy Hinkley) on the same stretch of beach (somewhere between Muscle Beach and Malibu) that had been Frankie and Annette's summer hangout. Old habits die hard, and pretty soon the now middle-aged couple have a fight when Frankie's old flame Connie (Connie Stevens) turns up. Annette instinctively grabs the nearest surfer-dude, a young cad named Troy (John Calvin), and each tries to make the other jealous. Meanwhile, Michael learns the meaning of responsibility from Frankie, while Bobby joins a punk surfing gang, modern day equivalents of Eric von Zipper and his gang of Rats & Mice.

One of the striking qualities watching Back to the Beach now is that the original films peaked little more than 20 years before this was made. Avalon was 46, Funicello just 44, yet the 20-somethings on the beach regard them as crotchety old-timers. It would be like Hayden Christensen and Natalie Portman spoofing their Star Wars prequel roles today. And since 35 years have passed since its release, Back to the Beach itself feels like a relic.

Avalon had been shopping the idea around for years, he apparently envisioning a more wistful, less broadly satirical film. For a while it was attached to actor-turned-director James Komack (Welcome Back, Kotter) but he left the project when Paramount insisted on a more satirical script. Director Hobbs was brought in as a last-minute replacement, she agreeing to the film on the condition that additional musical numbers be added. Paramount allowed this, but wouldn't add a penny to the modest budget or another day to the shooting schedule.

Hobbs's instincts were right. Back to the Beach's highlights are its musical numbers, particularly "Jamaica Ska," a perfect number in synch with the '60s movies yet (almost) contemporary ‘80s. The film would have been even better with more of this. Frankie does a pretty good cover of "California Sun" with Dick Dale (& at least 2 Del-Tones, according to the film), the legendary surf guitarist having appeared in the original series. Also appearing with Dale is equally legendary guitarist Stevie Ray Vaughn, not long before his untimely death.

Another highlight is the appearance of Pee-wee Herman (Paul Reubens), who performs an otherworldly rendition of "Surfin' Bird" that has to be seen to be believed, and which arguably tops his "Tequila" from Pee-wee's Big Adventure (1985). These numbers alone make the film worth seeing. As with the original Beach Party picture, famous (and not-so famous) stars make cameo appearances throughout Back to the Beach, though the Blu-ray packaging spoils some of the fun revealing several of these.

Another pleasing aspect of the film is that while it pokes fun at the naïveté of the original films, of Frankie and especially Annette's clean-cut image, it does so with obvious affection rather than cheap cynicism (the modus operandi of today), and Back to the Beach is itself nearly as wholesome. The two stars served as executive producers, yet gamely have a clear sense of humor about their screen personae; the script even makes jokes about Avalon's "helmet hair" and Funicello's ample bosom.

Reportedly 17 (!) writers worked on the script, most uncredited. Some of the jokes, many referencing not just the genre but other ‘50s-‘60s pop culture iconography, range from cleverly funny to lame and obvious, but the cast, Frankie and Annette particularly, give consistently spirited performances throughout. Paramount may have cheaped out with the AIP rights, but the style of acting is on that same, agreeably broad level. In small ways, the film seems to have been a little influential on other comedies; for instance, a brief cameo by O.J. Simpson may have directly led to his casting in the Naked Gun films that began immediately after.

Paramount's Blu-ray of Back to the Beach in 1.85:1 widescreen, in a new 4K transfer far superior to the earlier DVD release. Originally released in Ultra-Stereo, the 5.1 DTS-HD Master Audio mix is modest by today's standards, but comes to life during the musical sequences. A Dolby Stereo mix in French is also included, with subtitles in those languages included as an option. Region "A" encoded.

The lone supplement is a nine-minute interview with director Hobbs, she refreshingly frank about the challenges making the film while sharing amusing and enlightening anecdotes.

Ironically, the wistfulness Avalon originally envisioned but jettisoned for Back to the Beach manifested anyway when Annette Funicello was beginning to experience symptoms of what eventually was diagnosed as multiple sclerosis. Back to the Beach was her last film. And, appropriately, she has the last line of the film, in a shot that plays unscripted and was probably trimmed from some unrelated take: arm-in-arm with Frankie, Annette looks into the camera and, with a laugh, says, "Are we the corniest couple you've ever seen or what?" Maybe so, but I sure miss ‘em.