The Show
As the children of the '80s figure out they have the money to reclaim just about everything they miss from their childhood, it becomes obvious that if it aired during that magical decade, a show will return on DVD. Thus, we have the complete first season of "Alf." Sure, Alf's been around a lot more recently than, say, Balki Bartokomous (Note: I can't tell you how disturbed I am that I spelled that from memory - FR3), but his show is something of a TV relic, and there's probably a lot more Americans out there that know the furry little guy as a phone company pitchalien, than a sitcom star.

So, since some may need an introduction, let's open up our "TV Guide" Fall Preview from 1986. The show revolves around Gordon Shumway, an alien who crash-landed in the Tanner family's garage in California. The suburbanites, led by uptight dad Willie (Max Wright, "Misfits of Science"), take him in, name him "Alf" (for Alien Life Form) and try to hide his presence from everyone. Hilarity ensues. Thus begins a reign of comedy that has lived on until today, with Alf's new cable talk show. How did this relatively simple and, truthfully, inane comedy concept grow so popular as to branch out into two animated series, books, video games and everything else that can be stamped with a licensed image? 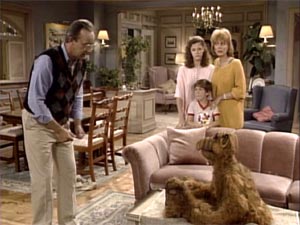 The answer lies in Alf. Voiced and controlled by show producer/writer/director Paul Fusco, Alf was, at times, more human than his castmates. His wisecracks were funny, instead of smarmy, as most sitcom "attitude" came across as. He was like that inappropriate uncle most everyone has. It didn't hurt that he was a walking, talking puppet. By not being human, he got away with a lot more than most characters on TV could, including trying to eat the family cat. This was a character that appealed to just about every demographic, and as a result, he's still with us today. The true testament to his popularity is the fact that the prime-time series this DVD brings home ran for 102 episodes over four seasons, not to mention a prime-time special and a TV movie (which fans of the show would rather forget.)

In watching the first season's episodes, it becomes obvious that the comedy hasn't aged well. The shows are cute, and loaded with schmaltz, making it all relatively inoffensive and safe. There are some "adult" jokes, mostly in lines from Alf, but they are so subtle that they aren't really that funny. While the majority of the series is by-the-book sitcom, including the obligatory clip show (here stretched into a two-parter), occasionally the show falls so in love with itself that it goes on tangents of ridiculousness, like Alf's rock video or the attack by a space cockroach.

By the way, before putting this set in to review, I didn't remember an '80s-hot daughter on this show. Man, I must have been really young when this show was on. The main cast member I remembered was Max Wright, and that's mainly because he was in a tabloid smoking crack out of a Coke can with his gay lover. How do you forget that? 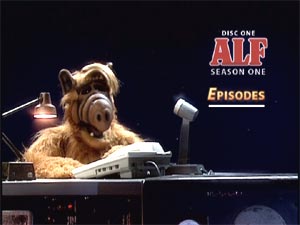 The DVDs
The 26 episodes in "Alf"'s first season are spread over four discs, with seven on each of the first three discs, and five on the final platter, alongside the bonus features. Each episode is presented full-screen with stereo sound. The discs are housed in a keep case, with two discs on each side of the case, secured in the same style as MGM's Pink Panther box set, with the discs partially overlapping. A slipcover surrounds the case. It's a decent way to make a smaller, and likely cheaper package, though I prefer ThinPaks.

While I detest DVD packages that list menus as a special feature, the makers of "Alf" Season One could do so and worry not about a tongue lashing. Alf hosts the menus, talking for a while as if hosting his own radio show, before imploring you to choose an option. When it comes time to choose an episode, a question mark icon allows you to access a short video introduction to each episode by Alf himself. Considering that most DVDs barely provide anything on their episode selection menus, this is a very nice bonus.

The Episodes
The episodes are spread across the discs as follows. This order is different than that of the aired episodes, which I assume is creator Paul Fusco's intention, considering his involvement in the DVDs' production. (The original air order is in parentheses.) It's also been learned that the episodes have been edited for time (likely the syndication edits), which is a disappointment.


The Extras
Though there are no commentaries (which should be standard for at least the first episode on old TV shows), this DVD set contains three extras that should appeal to fans of Alf. First up is the original pilot for the show. This, like a commentary, should be on every DVDTV set. It's so important to see how a show got its start. Here we get an extended and rejiggered version of the series' first episode, which has more exposition than the show that introduced America to Alf. The quality is similar to that of the aired episodes, which is good considering the age and its production status as a pilot.

A short outtakes reel (6:30) splices together bloopers from the show. Outtakes are always worth a look, and these clips are no exception, despite the subpar video quality. This stuff was hardly an archival priority it seems. Finally, a short text feature presents trivia about Alf. Interesting for fans, but nothing that would speak to the casual viewer.

In addition to the special features, there's a credit section for the DVD set. It would have been nice to see something on series writer/junkie Jerry Stahl here, but considering this is a family release, that was unlikely. Check out Permanent Midnight for more on his problems while writing "Alf."

The Quality
Though the episodes have a soft feel to them, the video is good, with vibrant colors where appropriate. The Tanner household is loaded with color, and the full-screen presentation delivers it faithfully. Night scenes are filled with deep blacks and some crisp shadows. Some grain is evident, especially in lighter spots.

On the audio side of things, the stereo mix is fine for the job. There's nothing that stands out, but the track gets across all the dialogue without distortion. 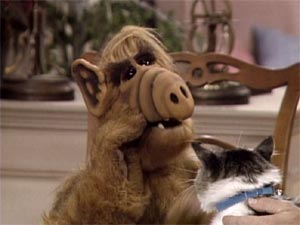 The Bottom Line
Like most '80s sitcoms, this show is nothing like what's on the air today. Whether it's simply a matter of the references or the production values, or even just the clothes, '80s shows tend to feel less "real" than the shows on TV now. But it retains a charm that's unique to the time period, and is still entertaining, though more so as a time capsule than a TV show. Lion's Gate has put out a decent package, with some nice features, though editing the episodes is troubling. Considering that the show's creator was involved in this making of this set, it may have been done with his blessing, but as Star Wars fans know, once a show or movie is in our hands, it's ours, not theirs anymore, and changes simply shouldn't be made. If you were a fan of the show and want an archive of your memories, pick this set up. Otherwise, it's a nice nostalgia rental.